CBC documentary, 14 & Muslim, chronicles Muslim teens as they transition from Grade 8 at Islamic school to different high schools. What they reveal is tolerance of their religious beliefs are only an issue outside of the classroom.

'Just because I have a different religion does not mean I was not born in Ajax,' says Malaieka

Malaieka, Sahar and Ahmad are Muslim teenagers who want the world to know they're just normal kids.

"We eat, we sleep, we wake up, we go to school — we're no different than anyone else," said Ahmand, who is featured in 14 & Muslim — a CBC Docs POV documentary that follows the students as they transition from the familiarity of their private Islamic school in Toronto toward different high schools.

14 & Muslim chronicles the lives of three teens as they transition from Grade 8 at Islamic school to Grade 9 at public schools, navigating through the issues high school brings. Now in Grade 10, they all agree when it comes to intolerance toward their religion, it's not the classroom that's the problem, it's the outside world.

"You live in my house for one day, you would know that women are not oppressed. I feel like that's a common thing in all of our houses," she said, referring to Sahar and Ahmad.

Malaieka ended up going to a Catholic high school near her house. Out of 1,400 students, she figures three are Muslim but added "people don't really care." 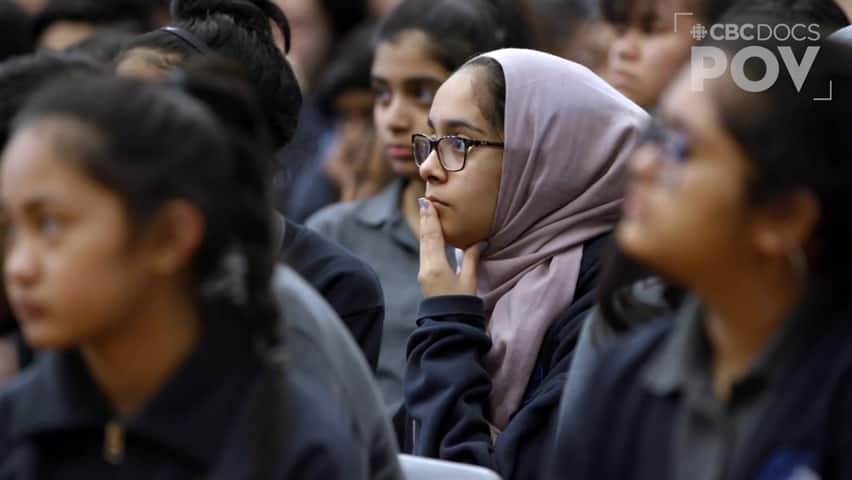 14 and Muslim: Sahar at a Catholic School

2 years agoVideo
1:00
Sahar has switched schools and now attends a Catholic school, where things are different. About 10% of the students here are Muslim and she's learning a lot of new things. 1:00

As a young Muslim, Malaieka does get frustrated, feeling she has to prove she's Canadian while wearing her hijab.

"Just because I have a different religion does not mean I was not born in Ajax, ok? I've never even been to Pakistan which is where my culture is from," she said.

Director Wendy Rowland hopes adults watching this documentary will see the students as "regular kids" and come away feeling enlightened by the content.

"It's this generation that's going to make a change and open people's minds," she told Tremonti.

"I think it's really refreshing to see that for these guys that are going to high school, they're easily accepted."

Listen to Anna Maria Tremonti's full discussion near the top of this page.

Produced by The Current's Alison Masemann.