A rare interview with Rinelle Harper, the Winnipeg teen who was brutally attacked and left for dead last November, and who has helped stoke a national discussion about violence against aboriginal women.

The Current12:07Rinelle Harper speaks up for missing and murdered indigenous women - Jan 28, 2015

About three months ago no one knew her name. And then on a cold night in early November, she was brutally attacked and left for dead on the banks of the Assiniboine. Today, Rinelle Harper is back in school, a quiet teenager whose very survival is a rallying point for those seeking answers around so many missing and murdered Indigenous women.

It happened last November... a brutal crime that sent chills across the country, and demanded that the country talk once again about a painful issue -- violence against aboriginal women.

In the weeks and months since that flurry of attention, Rinelle Harper has stayed mostly in the shadows, recovering with her family. She's said very little in public, appearing just once before an audience to voice her support for a national public inquiry into violence against aboriginal women.

But, together with her mother, Julie Harper, she has agreed to speak with us today. Rinelle and Julie Harper was in our Winnipeg studio. 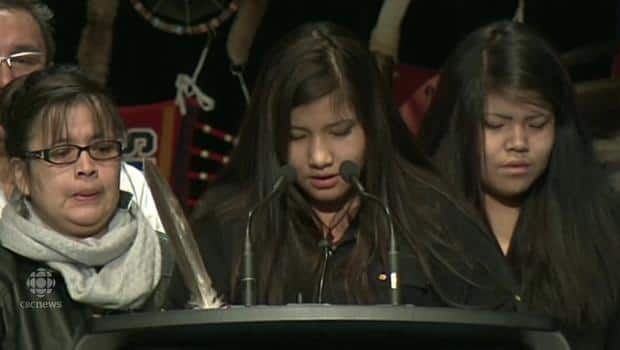 6 years agoVideo
2:02
Rinelle Harper, the 16-year-old student who was brutally attacked last month and left for dead near the Assiniboine River, has added her voice to calls for a national inquiry into missing and murdered aboriginal women. 2:02​

This segment was produced by The Current's Sujata Berry.