Timothy Schmalz speaks about his 'Homeless Jesus' statue, the philosophy behind it, and the reaction he's received from people around the world. 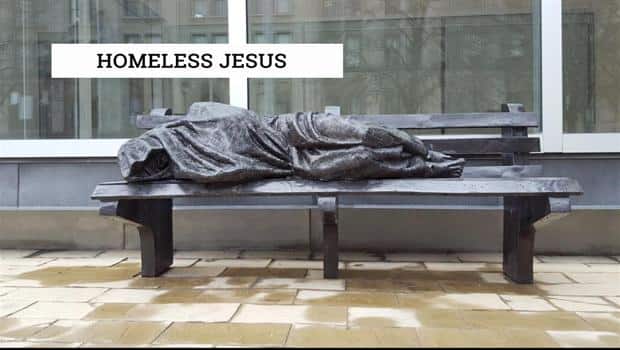 5 years agoVideo
1:04
'Homeless Jesus' statue, the philosophy behind it, and the reaction it received around the world. 1:04

From afar, it looks like a homeless person lying on a bench, covered in a blanket. Get a little closer and you'll notice the nail marks on its feet. This is not just any person. This is Jesus.

Timothy Schmalz is the sculptor of the Homeless Jesus statues. "It's hardcore and it's haunting. If we continually have our visual ambassadors, and that's what I think Christian artwork is, telling the story that everything is beautiful, we're missing a great opportunity to preach with the artwork."

I think that a homeless person, a marginalized person can feel very disconnected to the ideas of Jesus that have been represented as Mr. Perfect and 'everything's fine'. And so I think that this lets them in.- Timothy Schmalz

There are close to forty of the statues installed around the world. The very first was placed outside Regis College, the Jesuit School of Theology at University of Toronto. It also has a place at the Vatican and has been praised by Pope Francis.

But the response to Homeless Jesus hasn't been unanimous. The sculpture has been criticized and its installation has been vetoed in the borough of Westminster, London and elsewhere.

Others have responded with concern and compassion. Homeless Jesus has prompted several 911 calls from people who mistake the bronze sculpture for a real human being in need of help.