'Don't just close the doors': Michie Mee on the Canadian music industry and her first album in 20 years

Michie Mee joined q’s Tom Power to talk about her experience as a woman in a male-dominated genre, what the Canadian music industry missed both then and now, and how turning 50 has changed the way she makes her art.

q19:20‘Don’t just close the doors’: Michie Mee on the Canadian music industry and her first album in 20 years

It's been a minute since the legendary Jamaican-born, Toronto-raised rapper and actress Michelle McCullock, better known as Michie Mee, released a full-length album. But after a brief hiatus, the award-winning Canadian rap icon is back with a new 18-track record, Bahdgyal's Revenge.

The godmother of Canadian rap is the first Canadian female MC who in the late '80s fiercely broke into a then-nascent genre of hip-hop. Amalgamating her Jamaican identity and dialect with her rap persona, she graced us with classics such as On This Mic, Jamaican Funk and later on Don't Wanna Be Your Slave — as well as with many of her rap-reggae-alternative-metal fusion releases with her all-female Rage Against the Machine-esque band Raggadeath.

"I knew sometimes when you're listening to anything of any dialect, it sounds like another language and so it wasn't accepted by everybody, even in going to the U.S. and doing it there," Michie Mee said in an interview with q's Tom Power about her style and her Jamaican accent.

It was the thing that made me different, but it was deemed as something lower level or not up to par, yet unique — but not ready for marketing. ​​​​​- Michie Mee

"And if the whole genre is new, here you come with a whole other language — mixing with the genre and hip-hop and an accent — so it was very hard to convince everyone that this was something that was going to last, especially this long."

Michie Mee's impact on Canadian music and culture is immense. She was also the first Canadian hip-hop star to get signed to an American record label, creating a gateway to the U.S. hip-hop market for other Canadian rappers. In the process, she proved to the world that Canada is a strong contender in the genre.

On numerous occasions, veteran rappers such as Maestro Fresh Wes and Public Enemy's legendary frontman Chuck D acknowledged that it was Michie Mee who inspired them.

"Without Michie there would be no me. That's the queen right there, understand what I'm saying? All I really did was follow in her footsteps. I just did it my way," said Maestro Fresh Wes in an interview with CBC Music.

Rapper KRS-One also singled her out, saying that she was the reason he exists as an artist. And Kardinal Offishall stated he incorporated his roots into his own music because she broke the barrier first.

Many celebrated Canadian hip-hop artists such as Drake and even American artists of Caribbean descent (such as Sean Paul and Rihanna) would arguably have a much tougher time making it in the U.S. now if the road was not already paved, years prior.

Women in hip-hop, then and now

In an interview with CBC Radio 2 (currently known as CBC Music), Michie Mee explained that breaking into hip-hop in the late '80s was a challenge for women — and being an immigrant from Jamaica made it that much more difficult.

Though Jamaica has a long history of influencing hip-hop and pop culture in general, those contributions were not always recognized. Added to the mix was the fact that women just didn't seem to be taken seriously in hip-hop.

"[Queen] Latifah called everyone from everywhere out. And yeah, we hopped on a plane like the next day and went out there."

Michie Mee ended up appearing in Queen Latifah and Monie Love's Ladies First video and got a shout out in their 12-inch single.

"We always kept that love. So when everyone got in position and got on record deals and got, you know, acquainted with all the other people that were involved in the music business, we just  felt that we should stay together. So the camaraderie was great. And it still is, up to this day. It's just everyone got so busy, and they just turned into millionaires."

Some of the greatest female MCs were just starting out and that camaraderie between women was reflected in the media, but a few feuds did emerge.

In a way, maybe it was a way to bring back competitive battle rapping, said Michie Mee, "but it came out in a wrong way. And then gangsta rap came in."

"To see it from then until now, it's a big difference. I don't think you come into the game now, thinking the same way as we did. We were also trying to prove that [hip-hop] was a genre. … So now it's very much, 'Okay, these two are the top two so let them go at each other,' you know? You get a single out of it because the teams behind them think it's good business. So it's a different perspective on when females get into the game now, when they actually do work together." 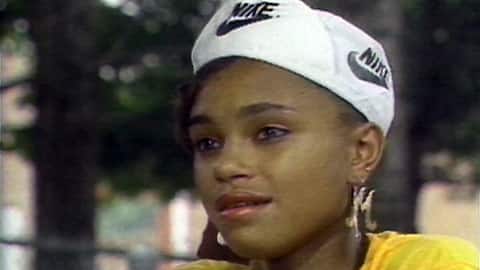 Virtually every hip-hop achievement Toronto (and Canada as a whole) is either something Michie Mee did first or tried to do first. She is essentially the alpha of Canada's hip-hop scene, but also an active participant in its movement, not only as an artist but as a fan and a consumer.

"When people say there's new talent here, you think of one generation. The talent that's here is of many generations because we haven't been exploited in that way, worldwide, so there's so much talent that's right. I think if you let the right ones out too, you may see a whole plethora, a whole wave of Canadian artists."

She said that our new and lead hip-hop generation as well as the one that helped them get there are either "killing it" or are qualified to do so, but there doesn't seem to be enough infrastructure to hold the talent that we have here.

Michie Mee has always put a spotlight on Canadian hip-hop artists saying they've been around for decades making incredible music. And even though hip-hop has been the dominant culture around the world for some time now, the Canadian music industry, in some ways, has ignored it for too long.

The veteran rapper explained that systemically what was and is missing in the Canadian music industry is the support, adding that the radio stations use excuses like "there's no demographics in terms of pushing the artists" when it comes to playing Canadian hip-hop, while the same rules don't seem to apply when U.S. artists such as Destiny's Child and Sean Paul are in question — yet "they broke here."

"In America, everybody knows, well, not everybody, but the game goes, if you don't have your publishing, you kind of get shows. In Canada, when they take your publishing, there's no shows. So that is it, you know, when you don't have that it's very hard to, you know, sell records. And then the numbers go down and it's very hard to open other territories."

Michie Mee also added that it can get very expensive, flying artists from the East coast to the West coast.

It's the resources here, we've turned it into an infrastructure that is dependent on something that is not contributing back to the artists that are actually doing the work. So that is an issue.- Michie Mee

Compared to rap, there is a distinct difference in the treatment of formative and veteran artists who hail from the rock and roll genre, such as Brian Adams or The Guess Who.

"We get no love because if I was in any other genre, and I did what I've done for hip-hop, you would have been acknowledged in another way. If you're in any other genre and you've done something like Denise Jones, may she rest in peace, for reggae music, you would have been acknowledged in that way. That's a veteran in the business. I'm a veteran in music.

"I can't even celebrate my own success because, no doubt, nobody knows how to celebrate me. And I'm just one of many."

Twinning with the Junos

Michie Mee, who turned 50 this year, noted with a laugh that she is the same age as the Juno Awards, give or take a few months. She exclaims that she feels like she's made it. "Yeah, we make it through the BS, you just, kind of like, celebrate that."

"If I would have got what I wanted earlier, who knows what would have happened to me or what I would have done with it. … There's always a reason for everything happening."

"I'm glad I made it to 50," says the hip-hop star, adding that she's grateful as some of her friends who started in the business around the same time as she did weren't as lucky, having either passed away or been deported.

I'm in a great country, I'm in a great place. I'm in a place of happiness. And I reached here at 50. And my community and my Canada knows me and I'm pretty good with that at 50.- Michie Mee

Time and experience seem to have changed the way Michie Mee approaches her art now compared to when she first started.

"I have calmed down a lot," Michie Mee reflected, adding, "you just get more professional … you just handle things different. That comes with maturity."

She would love for that philosophy to trickle down into the business side of music "and the environment of our Canadian artists, because we've got so much talent here … and ways to do it now, in this new digital world."

Michie Mee also wants the Canadian music industry to recognize its artists for their contributions. "Trust some of the experiences that people have to offer in this community, in this business, and [don't just], kind of, close the doors, and the gatekeepers just shut everyone out like we didn't live through the stuff that people made money off of. We were all here."

"There's opportunities for everyone here and I just want everyone to remember that. Just don't forget!"

Note: The conversation was condensed and edited for clarity and context.