This is not a Drake podcast 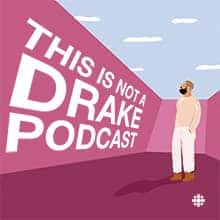 This is not a Drake podcast

Breaking down seminal moments in Drake's career to explore the history and evolution of hip-hop, R&B, gender dynamics, and Black culture. This series is about the rapper the world sees as the face of the 6, but it's really about the Toronto hip-hop scene most people don't know about... the one that made him. Hosted by Ty Harper

One of the most popular rappers in America isn’t American. But this podcast isn’t really about him. Drake’s success is a culmination of many unheard moments, songs, and artists that made hip-hop and Black music the dominant cultural force it is today. This podcast digs into those stories.

Drake is the poster boy of Toronto, although the city's hip-hop scene was thriving long before it became known to his fans as 'The 6ix.' But the Canadian music industry’s history with its homegrown hip-hop talent is long and fraught—this is a look at that relationship. Plus, the fight for the first Black-owned radio station in Canada, which turns 20 this year. Artists mentioned in this episode: Kardinal Offishall, Michie Mee, Maestro Fresh Wes, k-Os, Dream Warriors, K-4ce (the man who coined the term “T-Dot”), Theo 3 (who coined the term ‘Screwface Capital’) Saukrates, Mindbender, Choclair, Rochester, Eternia, Point Blank.

Ep 2: How the mixtape went digital

Even as its popularity grew, hip-hop was ignored by most commercial radio. DJs and artists intervened and underground mixtapes became *the* medium for distributing new music and gaining clout — But then, a raid by the FBI in Atlanta changed hip-hop distribution forever. Plus, how Drake’s So Far Gone mixtape fits into this digital evolution. Some artists and DJs mentioned in this episode: DJ Drama, HustleGRL, J. Cole, Kid Capri, DJ Doo Wop, DJ Clue.

Ep 3: The rise of the Nice Guy rapper

This episode contains explicit lyrics. Hip-hop feminists took the alpha male rapper and his critics to task in the 90s and 2000’s. Guest host Anupa Mistry finds out why. She goes on a journey with three Black women, to see how Drake's Nice Guy persona reveals the complexity of gender in hip-hop. Some scholars and artists mentioned in this episode: Treva Lindsey, Jenessa Williams, Sydanie (Featuring her 2018 song "Flirt"), Joan Morgan, Rihanna, LL Cool J.

Ep 4: The rise of the singing rapper

It's pretty common to hear rap and R&B influences on the same track, but that wasn’t always the case. Hip-hop was not received with open arms by many in the R&B establishment. Still, rappers found creative ways of being heard on the radio, while others pushed beyond stereotypes of Black masculinity to find a new voice. Some artists mentioned in this episode: Kwamé, DJ Frankie Crocker, Sugarhill Gang, Melle Mel, Teddy Riley, Bell Biv DeVoe, 50 cent, Kanye West.

Host Ty Harper examines how making this podcast during a pandemic and the Black Lives Matter protests has underlined the importance of telling the stories of hip hop, R&B and Black culture.

This is not a Drake podcast: trailer

This is a story about hip-hop and how its journey to mainstream dominance gave us Drake in the first place. The mixtape revolution that made his success possible. The evolution of gender dynamics in hip-hop. Rap and R&B’s long complicated history.