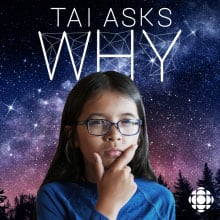 Tai Poole is trying to find answers to life's biggest questions. What happens after we die? What is love? How can we fix climate change? He may not solve them all, but give him a break ... he's only 11 years old.

Introducing Circle Round from WBUR

Created and produced by parents of young children, Circle Round adapts carefully-selected folktales from around the world into sound- and music-rich radio plays for kids ages 4 to 10. Listen on your favourite podcast app.

Free teaching resources have been developed for select episodes of Tai Asks Why! If you — or someone you know — teaches middle-school science, health, language or social studies, visit cbc.ca/teachingguides to learn more.

How does a song get stuck in your head?

Whether it’s a doot doot doot of an opening riff or a random mix of words from the chorus, 99 per cent of people admit to getting songs stuck in their heads. So what is it about certain songs that make them so catchy? How does a song get stuck in your head?

Ask Tai Why: Silence, no more humans, and the glow of the earth’s core

In this week's bonus segment Ask Tai Why, Tai takes questions from: Penelope Cook, Toronto: Is there such a thing as complete silence? Griff, Yukon: What comes after humans? Finley, Wakefield, Quebec: Does the core of the earth glow?

Why is space so dark if it’s full of stars?

Tai is fascinated by what’s in the dark spaces between the stars. Considering there are trillions of stars in the universe (and counting!), it seems a bit odd that the universe isn’t just a blinding ball of light. So then, why is space so dark?

Ask Tai Why: Fear, time and the colour of colours

In this week's bonus segment Ask Tai Why, Tai takes questions from: Charlotte, Toronto: What is fear, and why were we born with it? Desmond: What is Time? George, Toronto: What makes colour a colour?

When the dinosaurs died, how did other animals survive?

Tai spends a lot of time imagining how the apocalypse might go down. So, he turns to animals that have survived past apocalypses—like the one that killed the dinosaurs—to see what traits the true survivors have in common.

Download When the dinosaurs died, how did other animals survive?
[mp3 file: runs 00:25:14]

In bonus segment Ask Tai Why, Tai answers some questions for a change. This week, he takes questions from: Grace, Hamilton: Why do I have freckles Henry: Why are Video Games so violent? Alex, Halifax: Are farts changing the climate?

What’s the science behind bullying?

Tai and his friends all have experiences of being bullied. And, as he learns, it’s a pretty universal thing - even trees are known to bully other trees! Why is such an unpleasant thing so widespread? What is the science behind bullying?

Ask Tai Why: Cuteness, hotness and the origins of English

In a new bonus segment called Ask Tai Why, Tai answers some questions for a change. This week, he takes questions from: Von Lewis, Halifax: Why do cute animals make us smile? Hamzah, Ontario: Why is the sun hot? Rhea, Ontario: Who invented the English Language?

What are animals saying to each other?

Tai’s brother Kien thinks he can talk to ducks. We’ve taught our animals to sit and stay, but that’s not the same as us learning their language, you know? Do animals have language? And if they do, could we learn it? Can we ever really know what animals are saying to each other?

What is Deja Vu?

You know that feeling when you feel like you have lived a moment already? Well that’s deja vu (French for already seen) and apparently, it happens to over 60 per cent of people! But why? Is it a good thing or a bad thing? What is Deja Vu?

Tai Poole is back - and he has no time for small talk. He’d rather discuss why space is so dark, the real reason for deja vu, and the science behind bullying. Join Tai as he boldly goes where no 7th grader has gone before to find you answers you never knew you needed. His conversations with everyone from NASA experts, to award-winning musicians, to his little brother Kien will expand your mind and touch your heart.

Introducing The Two Princes from Gimlet

When Prince Rupert sets out to break the mysterious curse that’s destroying his kingdom, he’s ready to face whatever dastardly villain or vile monster stands in his way. What he isn’t prepared for are the bewildering new emotions he feels when he meets the handsome Amir, a rival prince on a quest to save his own realm. Forced to team up, the two princes soon discover that the only thing more difficult than saving their kingdoms is following their hearts. Listen to The Two Princes at gimlet.media/twoprinces. Tai Asks Why returns on August 28 for Season 2!

Tai is coming back for season 2...and he needs your help!

Tai is coming back for a second season this September. Do you have a question you'd like Tai to answer? Send them our way! Plus, Tai Asks Why has been nominated for a Webby Award! But to win, we need your vote! Head to cbc.ca/taiaskswhy to learn how to vote or to ask Tai a question.

How will we fix climate change?

Tai is freaking out about climate change. He's worried we're doomed. Tides are rising, species are dying from all of the heat. He's finding it hard to have hope...until he meets a man from NASA.

Which is cooler, zero or infinity?

Before he fully spoke English, Tai's first language was math. He loves numbers! Now he's talking to mathematicians about the ultimate coolness of two very special numbers: zero and infinity.

Why do we dream?

After thinking through a recent terrifying nightmare, Tai starts to question the importance of dreams. Why can't our minds just do nothing when we sleep?

What happens after you die?

The death of his grandfather has Tai thinking about the afterlife. The idea that our bodies and consciousness become nothing is really weird and confusing. So Tai turns to different religions for answers.

Should we trust our gut?

We've all heard the saying trust your gut, but is that scientifically accurate? Tai grapples with what that really means. If our guts are making decisions does that mean there's a brain in our gut?

Love is weird. How can this thing take over your body and bend it to its will? Tai looks to science, philosophy and his mom for answers.

Meet Tai Poole - a little guy with big questions. Join him as he heads from universities to playgrounds seeking answers. He may not solve all the mysteries of life, but give him a break ... he's only 11 years old. Coming October 24.