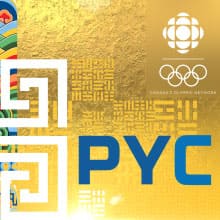 Anastasia Bucsis, host of Player's Own Voice, tees up a quick selection of excerpts from her chats with figure skater Scott Moir, Hockey player and broadcaster Tessa Bonhomme, and curling lead Ben Hebert. Podcast debuts Tuesday August 21. It's free everywhere you get your other podcasts

A couple of years ago, Ted Jan Bloemen left the long tracking speed skating powerhouse, Holland, activated his New Brunswick-born Dad's right to a Canadian passport, and decided this was the place that would make him a world beater. Ted’s incredible five- and ten thousand meter races at PyeongChang have turned the world of speed skating upside down. Kelly VanderBeek gathers her trusty sound recording equipment and sits down with the newly minted star at the Winter Olympic games.

Canadian Olympic Women's Hockey Forward Meghan Agosta has three gold medals, and as of Thursday February 22, one silver one. But in her day job- she's a Vancouver police officer... Among many other questions she answers, fresh off her epic tilt with the American Hockey team...how does the Police work inform Agosta's more famous job?

It is just about the most hair-raising sport on skis. So you might think that the dash and crash spectacle of ski cross would suit teenagers more than mature athletes…But as Kelly VanderBeek explores with Ski Cross silver winner Kelsey Serwa…this is one race where wily veterans can more than hold their own. It’s the fine art of keeping mind and body healthy in a super injurious sport on PYC podcast today.

If ever the Olympics delivered a perfect beer commercial, Jon Montgomery owns it. Fresh off his skeleton win at Whistler, on national tv, he had a hearty glug from a draft pitcher as he strode to collect his gold medal. Since then, capturing perfect moments has become Jon Montgomery’s specialty, showcasing Canadian beauty as host of the Amazing Race, and at these games, giving viewers a perfect understanding of skeleton racing. Jon and Kelly VanderBeek, host of PYC podcast, got together this week in PyeongChang.

Canadian Cross Country skier Knute Johnsgaard has answered the call of the wild. The Yukon is in his bones and it informs everything about the Olympian. From a decision to harvest all his own meat to foraging for whatever the forest offers , he is a man for whom solitude in nature is everything. Kelly VanderBeek heads to the ski trails near Canmore Alberta to chat with the Northern Nordic skier on today’s PYC podcast.

Heather Moyse won two gold medals pushing Bobsled for Canada with Kaillie Humphries. But the chance to threepeat didn’t tempt her to return nearly so much as did the ability to help the next generation of Bobsledders learn the ropes. And the veteran sledder shares another surprising admission: anxiety about having too muscly an appearance kept Heather out of weight training for many years of her career. Heather Moyse is Kelly VanderBeek’s guest today on PYC Podcast.

Canadian Bobsled driver Christopher Spring is an unusual bird. In a sport of technicians, engineers, and hundredths of seconds… he is an old school hippy who lives in his van and drives by feel. He wants to win medals, sure, but what he really wants is to run around naked in the woods. Meet the Australian- Canadian Sledder who revels in high speed and low maintenance…Kelly Vanderbeek's guest today (feb 17) on PYC podcast

Olympian ideals have new and welcome scope, as more and more, men and women are competing equally together on the same field of play. Canadian mixed doubles curlers Kaitlyn Lawes and John Morris threw the first rocks and won the first gold in their brand new olympic sport. The duo join host Kelly Vanderbeek at Phoenix Snow Park, PyeongChang for a happy review of their winning week, on PYC podcast

After an incredible 35 years at the peak of White Water Kayaking, David Ford is a walking repository of laboratory tested training techniques. He has serious knowledge to share with those who dare to compete in their fifth decade. And David says that everything he won…world cups, world championships, all the accolades came as a byproduct of trying to win at the Olympics…a note- If Kelly VanderBeek sounds at ease with her guest on PYC podcast...we should those point out that these two Olympians happen to be married.

If you have ever attended a major international figure skating competition, you know ​​PJ Kwong. Hers is the voice you hear introducing all the skaters as they come on and off the ice. The multilingual coach and commentator helps Kelly handicap the current field of skating greats. PJ says it is her unapologetic duty to be opinionated, and to be facts- based in doing so. She shares her considered opinion on why figure​ ​s​k​ating attracts eccentrics. ( hint- artistic activities ALWAYS attract eccentrics!) One ​final head spinner ​from PJ...the Quintuple jump is coming, sooner than you think.

He owns and operates one of the best known and best loved voices in Canadian sport. After sixteen olympic games and Fifty years in broadcasting…Steve Armitage has got perspective like almost nobody else. He and Kelly hunker down in a pub for stories from his early days; shlepping cans of film around Munich in 1972, loving the organizational miracle that was Los Angeles 1984, feeding Howard Cosell his daily soccer stories in Montreal 1976, and teaching himself how not to oversell a 'Turkey' - but what do you do when you are calling a game that is frankly, ho hum? …Steve Armitage with Olympic stories to savour on PYC podcast today.

Manny Osborne-Paradis and Kelly VanderBeek take listeners inside downhill’s best party on PYC podcast today. Everyone who has had a good day at Kitzbuhel can attest to the epic apres ski blowouts at the infamous Londoner pub. Once they wring the beer out of their socks, talk turns to the revolutionary new practise of letting national skiers have a say in designing their own training regimes and commitments for the season. Manny also describes the funny but true occasion on which thanking his Serviceman proved to be an overwhelming experience.

Canadian National speed skating coach Bart Schouten is Kelly’s guest on PYC Podcast today. The Dutch- born coaching legend tells host Kelly VanderBeek how he gets the best out of the best skaters in the world. He talks about fighting perfectionism… and about the surprising culture clashes in his international coaching career. What works for Americans does very little for German athletes…and techniques that shine in both those countries do NOT get the best out of Canadian skaters.

That he should even be at PyeongChang, after his devastating motorbike crash and ensuing stroke...well, it is a remarkable story. Denny Morrison’s attitude just before the games, was that getting himself back to this level of fitness means he has already succeeded… no matter how he fares in the medals department. Kelly VanderBeek's conversation with Denny Morrison is mostly an incredible story of recovery.

With Ten Olympic broadcasts under his belt, CBC Sports producer Phil LaChappelle has had a front row seat for some truly epic moments in competition. But the main reason we asked Phil to come on board PYC podcast, is that he has a genius for mischief. When Phil tells stories about things going a bit sideways behind the scenes, there's an excellent chance, Phil was involved in getting the caper started in the first place. He's a beg forgiveness, not permission, sorta guy. Did Phil ever tell you about the time Harold Ballard swiped an Olympic flag? Give us half an hour...it's a good one.

From the base of the mountain at Lake Louise, Steve Podborski and Kelly VanderBeek have a sprawling chat about the rough and tumble days of van living with the Crazy Canucks, about risk management in a deadly dangerous sport, about the terrors of skiing Kitzbuhel, the joys of having an Olympic course in front of you, and permission to ski it as fast as you dare, and about Arnold Schwarzenegger's yard sale.

Introducing himself with a wink as the 'skate god junior', Kurt Browning tells Kelly about his bratty beginnings, his lazy practise habits, and his mother's hassling him for having the nerve to be balding. Continuing in that vein of admirable honesty- he praises Canadians' forgiving him for being the best Figure Skater never to win an Olympic medal. He's funny, he's frank. and he's got an accurate read on who's going to do what in Figure skating at PyeongChang.

She is Canada's nordic skiing giant. Her groundbreaking bronze medal, a first for a North American athlete, at Salt Lake City,has been upgraded, TWICE, as drug cheats who had stood on the podium at silver and gold were discovered and disgraced. Kelly asks Beckie about the struggle to not become a total cynic in the face of ongoing steroidal scandals. Beckie's work with WADA has helped her stay positive...and the new push now is to encourage fellow athletes to speak up when they smell a rat.