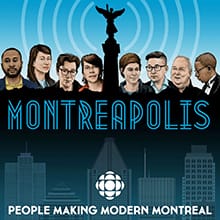 Host Steve Rukavina takes you into the spaces of people making modern Montreal.

Award-winning novelist Kim Thúy has called Montreal home since making the harrowing journey from communist Vietnam by boat with her family in 1979.

Saint-Lambert's Daniel Clarke Bouchard has played Carnegie Hall, The Ellen Show, studies piano at The Juilliard School and takes advice from Oliver Jones. All this, and he's just recently turned 17.

His two-year battle with an aggressive form of cancer inspired Jamaican-Canadian rapper, producer and performer Jonathan Emile to take on social issues through art and activism.

From walking the beat in the 1970s to putting away Hells Angel Maurice "Mom" Boucher, retired head of the SPVM Major Crimes Unit André Bouchard casts a critical eye on shifts in Montreal's law enforcement culture.

Kahnawake-born filmmaker Tracey Deer brings the raw, funny and rarely explored experiences of women on the rez into the spotlight through her hit TV series, Mohawk Girls. Her place in her own community is now uncertain.

Internationally renowned chef Antonio Park can stand the heat. After fire ravaged two of his restaurants, the South Korean/South American Montrealer is expanding his culinary empire. But that has a cost.