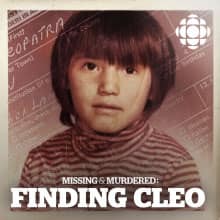 Where is Cleo?  Taken by child welfare workers in the 1970's and adopted in the U.S., the young Cree girl's family says she was stolen, raped and murdered while trying to hitchhike back home to Saskatchewan. Host Connie Walker joins their search.

Updated: Weekly
Download episodes from this podcast for: 3 years

Two waves of murders, 40 years apart. Who's killing men in Toronto's gay community and why are they getting away with it? Subscribe now at cbc.ca/uncover.

Introducing Someone Knows Something: Kerrie Brown

Fifteen-year-old Kerrie Brown disappeared from a house party in Thompson, Manitoba. Her body was found two days later. Host David Ridgen joins Kerrie's friends and family on their search for answers. Subscribe to Someone Knows Something now.

Even though it was supposed to have been destroyed in 1983, the police file documenting the investigation into Cleo’s death still exists and it contains more detail than Christine ever imagined learning about the last days, hours and even minutes of Cleo’s short life.

Christine travels to Pennsylvania for an emotional reunion with her brother, Johnny, who she hasn’t seen since she was a baby. Determined to get more answers about the days and weeks leading up to her sister’s death, Christine finally gets a copy of Cleo’s death certificate. That, and other documents begin to shed light on the truth she’s been seeking for decades.

S2 Episode 8: Salesperson of the year

Digging through archives in Saskatchewan, Connie makes a shocking discovery. As she investigates the controversial Adopt Indian Metis program which Cleo and her siblings were a part of, the man who started the program agrees to speak with her about its controversial origins, and legacy.

Connie’s chance meeting with the father who Cleo never knew is followed by new revelations about the Semaganis children’s biological mother, Lillian. A picture begins to emerge about why her children were taken, and when she joined the fight to stop the adoption of more Indigenous children into white homes.

A brief encounter with someone who knew Cleo perhaps better than anyone else just before her death reveals crucial details. Connecting new facts about her life leads the investigation to a world far from where Cleo died, back to Little Pine First Nation.

S2 Episode 5: Afraid of the dark

As Connie shares some shocking news with Cleo's siblings, the truth about what happened to her remains just out of reach. Police may have answers but can’t share them yet. It's time to visit the one person who's bound to know more.

The search for Cleo leads Connie to investigate a headstone belonging to a 13-year-old girl who died in 1978. The cemetery is more than 20 hours away from Arkansas, where Cleo's family has long believed she was killed.

Connie meets Cleo’s older brother, Johnny, in Pennsylvania, where he was adopted. He’s haunted by the memory of saying goodbye to Cleo and longs to fulfill a promise to find her. A late night internet search reveals he may be close.

S2 Episode 2: Eyes that haunted me

Christine gets a tip that helps geographically narrow the search for Cleo, and Connie visits another sister, April, to see what she may remember. Scouring old photos and documents, they stumble on a key reference to Cleo in April’s adoption records.

Connie responds to Christine’s plea for help finding her eldest sister, Cleo. The only proof of Cleo’s existence though is a tiny, undated school photo. A clue soon emerges which will take Christine’s search in unexpected directions.

In the 1970s, Cleo was taken by child welfare workers and adopted in the U.S. Her family, who has been searching for her since, was told she was murdered. Host Connie Walker helps the family unravel the mystery. A CBC News podcast coming March 7th.

Connie Walker questions police about DNA evidence, and learns that after nearly three decades, their seemingly stagnant investigation has become “very active”, as a result of new information brought to light in this podcast.

Digging deeper into old police notes, Connie Walker tries to find out what happened to a pile of bloody clothes matching a description of what Alberta was wearing on the night she disappeared.

S1 Episode 7: The Notebooks (Part One)

A closer examination of old RCMP notebooks yields new details about a mysterious phone call from a woman who knew where Alberta’s body was concealed, days before her body was actually found.

In this episode, Connie Walker finds the cabbie who people told us they saw with Alberta and her uncle Jack the night after she’s thought to have vanished. While talking to Walker the taxi driver discloses something surprising about his DNA.

A shocking new revelation surfaces about people seeing Alberta in a mysterious black truck after she was thought to have disappeared. The tip propels investigative reporter Connie Walker north, to Prince Rupert, British Columbia.

New details emerge about the last night Alberta was seen alive. Reporter Connie Walker speaks to a key witness who has never been interviewed by police about what he saw the night Alberta disappeared.

Investigative reporter Connie Walker tracks down the person police suspected in the murder of Alberta Williams.

Combing through old police notebooks, Walker tries to piece together what happened on the night Alberta vanished. She discovers that even before Alberta’s body was found, one of the people interviewed hinted at a “tragic accident”.

Reporter Connie Walker meets face to face with the person who sent her a tip about Alberta Williams’ unsolved murder. Find out why they’re breaking their silence, and meet the sister who’s still haunted by vivid memories of Alberta’s disappearance.

This preview of Missing & Murdered: Who Killed Alberta Williams? explores how a chilling tip sparked the CBC’s Connie Walker to uncover secrets and confront a suspect in a decades-old cold case. The 8-part true crime podcast launches on October 25th.