The Secret Life of Canada 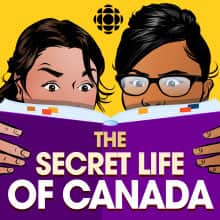 The Secret Life of Canada

The Secret Life of Canada is a history podcast about the country you know and the stories you don't. New season launching October 2nd 2018.

Free teaching resources have been developed for select episodes of The Secret Life of Canada! If you — or someone you know — teaches high school history, geography, civics or Indigenous Studies, visit cbc.ca/teachingguides to learn more.

Who has been looking after Canada’s kids? We find out that Indigenous women and women from all over the world took on this job, and none of their stories follow the plot line to Sound of Music. From Confederation to present day, has anything changed for these workers? For books referenced in this episode please visit our website at cbc.ca/secretlifeofcanada

S2: Shout out to Autumn Peltier

It's our first shout out to a living youth leader! Meet Anishnabe-kwe Autumn Peltier. Greatly influenced by her great aunt Josephine Mandamin, Autumn has been using her voice to advocate for water rights since she was 8 years old. Today, we learn a little more about this phenomenal water warrior and International Children’s Peace Prize nominee.

A mailbag episode! You asked and we answered your burning history questions which took us to the Cowichan sweater, Cheezies, the legacy of Hawaiian Canadians in B.C and one guy named Portuguese Joe.

What is the Indian Act and why Canada still have it on the books? The Secret Life team looks at the roots of this complicated policy, which after 143 years is still embedded in Canadian identity, from the policy that led to the Act to how it still impacts Indigenous identities today.

S2: Shout out to Gay Asians of Toronto

As Pride celebrations kick off across the country, Leah and Falen shout out the Gay Asians of Toronto (GAT). Formed in 1979, this organization is thought to be the first LGBT group for non-white queer people in Canada.

Most major cities across Canada have a Chinatown - but how did they start, and why? This episode, a look at the early history of Chinese people this side of the Pacific, and the historic Chinatown in B.C. that predates Confederation. (Hint: it's not in Vancouver.)

Meet Dr. Oronhyatekha, or Burning Cloud as he was known in Mohawk. Oronhyatekha grew up on Six Nations reserve and attended residential school where he trained to be a cobbler - but life had bigger plans. Hear how he became one of the first Indigenous doctors in Canada.

This episode we look at the thing that literally defines Canada - the border. What happened to First Nations when the border was drawn right through their land? And as American "draft dodgers" came north, why did thousands of Canadians volunteer to fight for the U.S. during the war in Vietnam?

S2: Shout Out to Bernelda Wheeler

Meet Bernelda Wheeler, the "First Lady of Indigenous Broadcasting in Canada". The broadcaster, journalist, actor and activist inspired a generation of Indigenous journalists.

Just how did a Greek god become a beacon for gay men in the Prairies? In this episode, Falen and Leah look into some of earliest known queer spaces in the Prairies, how they came to be and why they were so important. If you don't think of Winnipeg as a queer city, this episode may just change your mind.

S2: Shout Out to Your Grandma

In a special shout out for International Women's Day, The Secret Life of Canada asked listeners to share stories about the matriarchs hidden in their family histories. These women may not have been written about, or have won awards, or have achieved historic "firsts" but the people they were and the choices they made had a huge impact on their communities, families and descendants.

S2: The province of Jamaica

This episode we take a look at early Caribbean migration to Canada and reveal which islands could have become Canadian provinces. We also dive into the history of Black railway porters and how they and their wives made Winnipeg a hub of labour activism in Canada.

S2: Shout Out to John Ware

Meet John Ware, the Black cowboy who helped build Alberta's ranching industry and became a legend for his skill as horseman. Please be advised this episode contains strong language.

Can the foundation of Canada be traced back to Indigenous trade routes? In this episode Falen and Leah take a trip across the Great Lakes, they talk corn and vampires, and discuss some big concerns currently facing Canada's water.

S2: Shout Out to Madhu Verma

Many Canadians may not have heard of Madhu Verma but her almost fifty years of social activism has greatly shaped the current landscape of Fredericton, N.B. and Canada's East Coast.

S2: Shout Out to Eleanor Collins

Meet Eleanor Collins - Canada's first lady of jazz and the first Black person in North America to host a nationally broadcast television series, "The Eleanor Show" which began in 1954.

Want to know where we get our ideas? Why Toronto was the original no-fun city? Check out the Q&A from our live show at the Hotdocs Podcast Festival in November 2018.

It's our first live show! Recorded in front of an audience for the Hotdocs Podcast Festival, we try to answer the age-old question: why is Toronto the city Canada loves to hate? Featuring special guests Jane Luk, Kris Siddiqi, Brandon Hackett and music by Matt Reid.

There is no doubt that the Klondike Gold Rush was an iconic event. But what did the mining industry cost the original people of the territory? And what was left when all the gold was gone? And what is a sour toe cocktail?

Meet Private Buckam Singh, of one of the first Sikh Canadian soldiers. During WWI he enlisted with the Canadian Expeditionary Forces. In 1916 he served with the 20th Canadian Infantry Battalion in the battlefields of Flanders. His resting place in Kitchener, Ont., is now the only known WWI Sikh Canadian Soldier's military grave in Canada.

Is Canada a haunted place? In this bonus Halloween episode Falen and Leah travel to some of Canada's more obscure haunts. From one of Canada's oldest universities to a former asylum in Quebec to a number of haunted theatres across the country. Leah and Falen seek out what hides in these historical haunts.

Meet C. D. Hoy of Quesnel, B.C. His work wasn't discovered until 1995 when archivists found his photography. He left behind thousands of pictures that offered a rare look at life during the turn of the century through the eyes of the marginalized.

The Bay Blanket. These warm blankets are as iconic as Mariah Carey's lip-syncing, but some people believe they were used to spread smallpox and decimate entire Indigenous communities. We dive into the history of The Hudson's Bay Company and unpack the very complicated story of the iconic striped blanket. For books and films referenced in this episode please visit our website at cbc.ca/secretlifeofcanada

Season One Wrap Up

Season 1 is done, and we're taking some time off to work on season 2!

S1: Shout Out to Fred Sasakamoose

S1: The Secret Life of Statues

What do you have to do to get a statue in Canada? We put some of our most lauded historical figures on trial and deliberate their pros and cons. Who should be torn down and who should stay up? From the Famous Five to Terry Fox, we look at some of the best and worst.

S1: Shout Out to Irene Uchida

Meet Irene Uchida. A Japanese Canadian scientist, she was one of thousands of Japanese Canadians who were imprisoned as part of the Japanese Internment during WW1. Dr. Uchida went on to become a groundbreaking geneticist, transforming maternal and fetal health around the world.

Canada is full of its own weird and wonderful snacks. From Pizza Pops to ketchup chips, we dive into the history of Canadian food.

S1: Shout Out to Tom Longboat

Meet Tom Longboat, an Onondaga long distance runner born in 1887 on Six Nations. Tom became one of the most celebrated athletes of all time, despite his struggles and encountering racism throughout his career.

S1: The Secret Life of the North

Nunavut has the largest landmass out of all the provinces and territories in Canada - and yet, it is an area that many of us know the least about. In this episode, we look at the forced relocation of the Inuit, the Eskimo Identification System, and the dog slaughter perpetuated by the Canadian government.

S1: Shout Out to Jackie Shane

Meet Jackie Shane, the singer and trailblazer that came to prominence during Toronto's bustling Yonge Street music scene during the '60s.