Sanctioned: The Arrest of a Telecom Giant 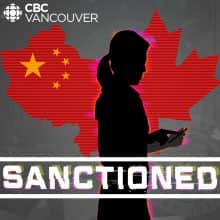 Sanctioned: The Arrest of a Telecom Giant

The arrest of Huawei executive Meng Wanzhou in Vancouver in December 2018 placed Canada in the middle of a global trade war. Stephen Quinn narrates a story of international intrigue set against a dramatic battle to dominate the economies of the future.

Canadian Prime Minister Justin Trudeau tells the U.S. government not to close a trade deal without settling the question of Meng Wanzhou and the two Canadians accused of spying in China. The CBC's long-planned interview with Meng's father - Huawei founder Ren Zhengfei - falls apart. And despite volumes of answers given to reporters from around the globe, questions still remain about Huawei's role in 5G technology.

Meng Wanzhou goes to court to force the Canadian government to produce the documents her lawyers claim she'll need to prove she's the victim of a conspiracy. An old friend turns up in court with words of support. And Meng's father turns tastemaker with his recommendation of a book by a jailed French executive who claims he was also the victim of an 'American Trap.'

Episode 8 - The Rule of Law

Steve Bannon - the man credited with engineering U.S. President Donald Trump's election campaign announces plans to release a movie based on the Meng Wanzhou story. Tensions between Canada and China reach a breaking point and a former Prime Minister weighs in. Protests in Hong Kong reignite questions around democracy and human rights. And Canadians are forced to ask exactly what kind of sacrifices they're willing to make to appease a trading partner.

Grainy video emerges of Meng Wanzhou's first fateful hours in Vancouver as the legal battle over her possible extradition narrows down to the Huawei executive's treatment at the hands of authorities. Did the Canadians conspire with the Americans to subvert her rights? And Meng moves uptown, inhabiting a new house, a new look and what appears to be a new public relations strategy.

Now living under a form of house arrest, Meng Wanzhou plans her legal strategy as tensions simmer between the U.S., China and Canada.. Prosecutors unseal an indictment against Meng and Huawei and a Canadian faces the death penalty.

As Meng Wanzhou's lawyers craft a plan for her release, China shows its displeasure with the arrest of an icon by arresting two Canadians accused of spying. President Donald Trump weighs in on the situation and Meng's friends step forward to support her.

Meng Wanzhou lands in Vancouver on what was supposed to be a routine transit stop. Instead, she finds herself under arrest, accused of violating economic sanctions in Iran and facing the possibility of jail in the United States.

As Meng Wanzhou appears in a Vancouver courtroom for the first time, the story of her remarkable career with Huawei emerges. And questions are raised about the Chinese government's role in the powerhouse firm her father built from the ground up.

Meng Wanzhou faces a week in a British Columbia jail. It's a remarkable change in fortunes for a woman who once welcomed former Federal Reserve chair Alan Greenspan to an economic forum. And a revolution in Iran leads to sanctions that will one day make a Power Point presentation Exhibit A in the case of the People V Meng.

News breaks of Meng's arrest and the international media descends on Vancouver as Meng Wanzhou's local real estate holdings make her a poster-child for a city riven by real estate speculation by wealthy Chinese.

Sanctioned: The Arrest of a Telecom Giant (Trailer)

The arrest of Huawei executive Meng Wanzhou in Vancouver in December 2018 placed Canada in the middle of a global trade war at an unprecedented moment in telecommunications history. Stephen Quinn narrates a story of international intrigue and one woman's fight for liberty set against a dramatic battle to dominate the economies of the future. Coming April 25th.