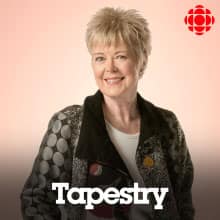 Tapestry explores spirituality, religion and the search for meaning. Find space for your soul every week.

Should I stay or should I go?

Jason Shron won’t finish building the model railroad in his basement - a scaled down replica of the Toronto-Montreal route circa 1980 - until he is 95 years old. But that’s OK: for him, model railroading is a kind of spiritual practice. Brian Bachand was passionate about his work as a Catholic priest in Boston, but he made the decision to leave. Lena Felton shares expert advice on when and how to quit a book, a relationship, or a dream.

Rachel Meyer is a theologian and the mother of a six-year-old boy. She speaks to Mary Hynes about how she’s trying to pass on the best of her Lutheran upbringing, yoga and Buddhist philosophy, and an ecofeminist appreciation for nature to her son, while ditching the more toxic elements. Musician Daniela Andrade on navigating the conflicting taboos and expectations about being Latina and arriving at her own strong sense of womanhood.

Michael Schur, creator of NBC comedy The Good Place, gambled that viewers were hungry for discussions about ethics and philosophy, even if they didn't know it at the time. His gamble paid off, making The Good Place a hit show.

If you were to play ‘where are they now’ about pop stars from the 1980s - you’d couldn’t do much better than Richard Coles. Back then, he was a member of the British pop duo The Communards, with a #1 hit single. Today he’s a parish priest in England.

Rabbi Sacks won the 2016 Templeton Prize for his book, "Not in God's Name: Confronting Religious Violence." This award is given annually to someone who has made a profound spiritual contribution to the world.

Salman Ahmad and his band Junoon perform an irresistible blend of rock and qawwali. Their lyrics are in Urdu, inspired by the mystical branch of Islam ... Sufism. Junoon is the most popular rock group in South Asia, with sales of over 30 million. In his memoir, Rock & Roll Jihad, Salman Ahmad describes his fight to bring down the wall between east and west, and to overcome the barriers of fundamentalism to bring cultures together through music.

Dr. Francis Collins is the geneticist who directed the Human Genome Project mapping DNA, which he calls the "first glimpse of our own instruction book, previously known only to God."

According to Patricia Pearson, about fifty percent of the bereaved sense the presence of the dead. Her book is called, Opening Heaven's Door: What The Dying May Be Trying to Tell Us About Where They're Going.

Ijeoma Oluo, author of So You Want to Talk About Race, wants to change the conversation about racial oppression. “We need to look at what racial oppression actually is. It is not a collection of people who don’t like people of colour, and in fact it never was.” You'll also hear from Andrea Chiu about how Oluo's book helped Chiu explain her perspective on race to her white wife.

Champion of the Damned: Bryan Stevenson's fight to fix a broken justice system

When asked for a short bio, Bryan Stevenson offered up these 7 words: "Broken by poverty, injustice, condemnation. But hopeful." It's a powerful description, if a little too modest. Other people have called him: Atticus Finch meets Martin Luther King.

Navigating the moral maze of the pandemic, music for the soul

In our new COVID-19 world, decisions that were once easy — going to the park, visiting friends and family — are suddenly more complex and morally fraught. Philosopher Alice MacLaughlin and moral psychologist Azim Shariff offer some ethical guidance. Plus, a new addition to our Soundtrack for the Soul.

Download Navigating the moral maze of the pandemic, music for the soul
[mp3 file: runs 00:50:54]

Frodo Baggins, Odysseus, Dante. Three characters on epic, dangerous quests. According to scholar Joy Clarkson, reading stories like theirs can inspire strength and courage in people during hard times. Plus, we check in with BC salon owner Tanya Sullivan — before and after the pandemic shutdown — and discover what music is keeping her afloat.

In the Before Times, Mary Hynes and Brian Goldman were work pals. We called Dr. Goldman to talk about our Soundtrack for the Soul — the playlist of songs giving people life right now — but the script went out the window and the two started talking from the heart. Blue Jays announcer Jamie Campbell has been calling elderly fans during the pandemic to ward off loneliness… and the human connection has fortified Campbell and fans alike. When Nehal El-Hadi gave birth to her first child, she instinctively reached for the sandalwood oil, to anoint her baby and build a connection with her Sudanese culture.

Healing power of K-pop, pandemic playtime, music for the soul

Korean boy band BTS has legions of devoted fans known as ARMY. In her documentary, CBC producer - and self-professed ARMY - Jane van Koeverden explores why the connection between BTS and its fans is so deep. Hint: their loyalty is based on much more than just catchy music. Escape room owner Ibrahim Faruqui talks about the importance of play during the pandemic. Stan Halbesma, owner of a rural Manitoba grocery store, offers music for the soul.

We revisit an unforgettable interview from 2006 with journalist Randall Sullivan as part of our Tapestry@25 celebrations. Sullivan began investigating purported miracles — sightings of the Virgin Mary — as an assignment for Rolling Stone magazine. It took him from a trailer in Oregon to the hillsides of Medugorje and eventually led to a harrowing chapter of his life… that turned him from a skeptic to a believer. Plus a new addition to Tapestry’s Soundtrack for the Soul.

NWT family self-isolates on the land during pandemic, the sacred lives of black girls

Shortly after the COVID-19 pandemic began, Dene artist and activist Melaw Nakehk’o packed up her three sons, left their home in Yellowknife, and set up camp with her parents along the Dehcho River. She says physical distancing in town left her feeling disconnected, but isolating on the land for five weeks gave her family an opportunity to reconnect with their traditional way of life. Khristi Lauren Adams is an ordained Baptist minister and youth advocate who has devoted her life to working with young black women and girls. She says they often struggle with the belief they can’t be anything but fierce. She works to help them feel ‘seen’ and cultivate their self-acceptance.

Pandemic parenting advice, how to celebrate Ramadan from a distance

Author and parenting expert Ann Douglas offers her signature blend of compassion and practical advice to parents struggling to care for their children during COVID-19 isolation. Sikander Hashmi is an imam and community leader in Kanata, ON. He shares how he is guiding his community through Ramadan celebrations despite physical isolation.

Wisdom from a war zone, music for the soul

Aisha Ahmad is a political science professor and an advisor to governments and international organizations on global security policies. During the pandemic, she has become a sort of online guide, advising her more than 19,000 Twitter followers how to stay centred and positive during the pandemic. Ahmad draws on wisdom she earned while living in conflict zones around the world, including Afghanistan, Somalia, Pakistan, Mali and Lebanon. Professor Ahmad and Tapestry listener Suzanne Picot add music to our Soundtrack for the Soul.

How to prevent a pandemic-induced social recession, music for the soul

Dr. Alice Chen warns that isolation and physical distancing, while necessary now, could lead our social muscles to atrophy. She offers simple tips to keep those muscles strong and prevent a social recession. Sophie Châtillon is a pharmacist outside Montreal who’s pregnant with her second child. She shares the two songs that are helping her through this strange time.

Download How to prevent a pandemic-induced social recession, music for the soul
[mp3 file: runs 00:45:54]

Parody videos, pandemic grounding exercises, and music for your soul

Introverts in the pandemic

Introvert Jessica Pan reflects on her ‘nightmarish’ quest to live like an extrovert for a year. American freelance writer Dan Brooks cautions against typecasting yourself. And, a Moncton couple recommends a song for our Soundtrack for the Soul that made them “laugh out loud.”

Tapestry@25: Back to the Garden

These are difficult days all over the world, so it’s a good time to hear from two wise elders. It's part of our continuing series Tapestry@25, celebrating our most-requested and most memorable interviews from the archives. Buddhist scholar Joanna Macy and gardener Marjorie Harris will offer guidance on finding the sublime in the smallest of things. This episode is all about hope, gratitude and slowing down enough to let a little joy catch up with you.

Tapestry launches its Soundtrack for the Soul, a collection of songs to lift your spirits and calm your nerves during the COVID-19 pandemic; and rabbi Denise Handlarski leads SecularSynagogue.com, an online Jewish community.

In 2020, Christians in England are rededicating their country as the "Dowry of Mary," an event that hasn’t happened since 1381 under King Richard ll. Monsignor John Armitage says reinstating this medieval tradition is an act of joy for the 21st century. Plus journalist Talia Lavin is a supporter of Bernie Sanders for many reasons, including the fact that he reminds her of a zaydie - the Yiddish term for grandfather. Lavin reflects on what it would mean to have a Jewish president and wonders if America is ready.