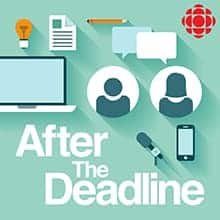 After the deadline is a new podcast that explores one of the biggest stories of the week in a way that deepens our connection as Manitobans. It also reveals what's behind the journalic decisions that make or break a story.

Episode 6: Value of the Village

What's the value of Osborne Village? If you ask the city's taxation department you'll learn that several spots along the strip are valued in the millions, but that doesn't mean much if you can't afford the rent. Then again, some things -- like the culture and history of a neighbourhood -- can't be bought. But can they be lost?

Doug and Darseen Pryor told CBC that a broken health care system failed their 21 year-old daughter who died by suicide. Then, just days after their story was shared, the World Health Organization declared a global pandemic and our collective conversations shifted toward concerns about COVID-19. The Pryors want to make sure their daughter is remembered and that her story will help fix the healthcare system and prevent more people from falling through cracks. These are the stories to consider on our way to a new post-pandemic normal.

Men have a numerical advantage on and off the ice in the hockey world. Efforts are being made to make room for women as players and execs, but fans and researchers of the sport say there is something inherently wrong with the hockey that a few new players just won't fix. Hockey is broken, but it's worth saving. What will it take to fix it?

Episode 3: What about us?

There is a resourcefulness that can come with hearing the word "no", and many people living with disabilities have experience with facing barriers and finding another way. But how far can it take you in a pandemic? We hear several voices from the disabilities community about the new barriers and the blessings in disguise.

Episode 2: Back to work

Is my workplace safe? Rebecca Steer didn’t think so, so she quit. But not everyone has the option of resigning or looking for new employment. So what are the options for workers wary of going back to work during a pandemic? And what are some of the challenges faced by Manitoba businesses as they open up in ways that will keep us all safe?

After the deadline (trailer)

After the deadline is a new podcast from CBC Manitoba, Launching this spring, which will take you behind the scenes of the big story of the week.