Hours after a photo Liberal Leader Justin Trudeau wearing brownface in 2001 surfaced, Elamin Abdelmahmoud and Rosemary Barton discussed the fraught history behind racist makeup and the difficult conversations we're having, and not having, as a country. 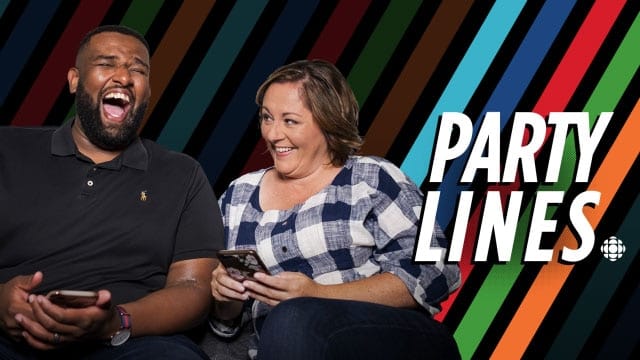 Elamin Abdelmahmoud was not among the campaign reporters who questioned Liberal Leader Justin Trudeau on the campaign trail Wednesday night, following the publication of a 2001 photo of him wearing dark makeup and a costume turban — but he was among the first to ask the kind of follow-up questions Trudeau fielded on Thursday.

In the latest episode of Party Lines, recorded in the hours following the news, Elamin and co-host Rosemary Barton sat down to talk about the bombshell photos, the fraught history behind them and the difficult conversations we're having, and not having, as a country in 2019.

"It's not a joke that suddenly became unacceptable. It's always been a painful history," said Elamin, referencing the long history of people darkening their skin for performance or entertainment.

"Every time that we talk about brownface or blackface it's an uncomfortable conversation. And we are gonna have to get uncomfortable today."

'There are so many conversations we're not having'

On Wednesday Trudeau also admitted that the incident was not isolated, recalling an event in which he sang Day O in a high school talent show while wearing dark makeup.

"It was something that I didn't think was racist at the time, but now I recognize it was something racist to do and I am deeply sorry," he said, adding that he "should have known better."

Reporters asked a variety of questions, including how he will explain this situation to his children, but there were at least five prompts that Elamin did not hear in the early hours of the breaking news.

For Elamin, this is a moment in which we might open up a difficult but "useful" conversation that is uncomfortable for many — even those who consider themselves defenders of diversity and inclusion.

On Thursday afternoon, Trudeau appeared again before a Winnipeg crowd to take another round of questions, including what he was thinking at the time. He said his "layers of privilege" prevented him from understanding how hurtful and offensive his costumes have been.

"Darkening your face, regardless of the context of the circumstances, is always unacceptable because of the racist history of blackface. I should have understood that then, and I never should have done it," he said.

Where do we go from here?

Last night, Rosie predicted that this story is far from over.

"Of course the most important thing is how Canadians react and how voters respond. But, you know, over the next few days it will be about how the opposition tries to frame this," she said.

At the same time, both hosts are hopeful that a more thoughtful, nuanced discussion could be born of this situation.

"It may still happen. Sometimes from these ugly, painful moments you can push a conversation in the right direction. And maybe that's what will define leadership in the coming days," said Rosie.

Want to keep up with Party Lines?

Listen for free at cbc.ca/partylines or on your favourite podcast app — including Apple Podcasts, Google Podcasts and Spotify. And if you're new to podcasts, start here.