The lessons Buffy Sainte-Marie taught me

Falen Johnson, host of the brand new podcast Buffy — a memoir of Buffy Sainte-Marie, talks about what she's learned from the legendary Cree singer-songwriter during the course of the project.

Buffy Sainte-Marie is one of the most prolific singer-songwriters of the past century. For 60 years her music has quietly reverberated throughout pop culture, and provided a touchstone for Indigenous resistance. In the new five-part podcast series, Buffy, Mohawk and Tuscarora writer Falen Johnson explores how Buffy's life and legacy is essential to understanding Indigenous resilience.

Johnson spoke with CBC Podcasts about the making of Buffy and what she learned from the 81-year-old legend.

You say Buffy's always been there — like air. What's your first memory of Buffy?

That's just the thing. I asked myself that question when we first started making the podcast. Because a lot of people have these big moments of remembering seeing Buffy on Sesame Street or they remember driving to the powwow with their family and hearing her tape play in their car or, you know, seeing her in a movie. And for me, I just can't pinpoint it.There's no one specific memory. I asked other people this question and a lot of Indigenous people couldn't say when she appeared in their life — she's just always been there in the background, whether we know it or not, which I kind of love.

That's the thing about air. You don't know it's there, but you certainly need it.

Why this moment for this podcast?

I hesitate to call this a moment because it's hard for me to identify it as that because as an Indigenous person the moment is always the moment that you're in — but there is something happening right now. Canada and the rest of the world is witnessing our history in a different way. And if you're Indigenous, you know when those moments are happening. Like, for example, I think of the Oka crisis or the resistance at Kanesatake as a big wave that happened for Indigenous people in 1990, a wave so big that afterwards Indigenous country was changed. And then things get quiet again. Then there's another wave that comes — like Idle No More.

The waves are moving differently now, they seem to be moving faster. For me, the thing that I saw in Buffy's story and in her music was that she's been witnessing these moments for longer than me and for longer than a lot of Indigenous people. And she's continued to be resilient and graceful and gracious and not ignore the issues, not ignore what's going on, but to transform it into art and to give space to our activists. Buffy has always used those moments to create, to draw attention and to hold that space.

Listen to the trailer: 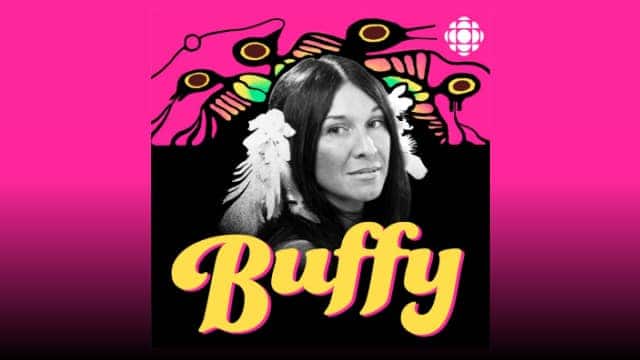 What is a lesson that Buffy taught you?

The thing that I asked her in one of the later episodes was, "If this is a moment that we're in, how do we keep them listening?" And, you know, she says we are a very small minority, but we are very special. And these moments are going to come when people pay attention to us and we just have to grab on to them and just remember how special we are.

I think I'm a little bit more of a cynic than Buffy and so the thing I really want to take from her and I'll continue to try and be like Buffy is just managing my cynicism. Finding optimism, finding the celebration in who we are and fighting for optimism. Working towards optimism.

In audio, you can give people a different set of facts. And so I think I am going to just keep working and I'm going to keep trying to give people the facts like Buffy does.

What did the medium of podcasting allow for this project?

I love the tape that's being recorded as the thing that's happening. I love that intimacy. It is being able to catch her in the moment, right?

What's the most surprising thing you learned in your research?

When I was standing outside of Massey Hall to go and see her show at the end of November, I was just asking people what her influence was on them and people just lit up. There were more than a few people that we've met over the course of making this who have been, like, "I was a driver for her back in '98. I picked her up at the airport and I drove her to her venue and then I saw her in the airport four years later and she remembered who I was." And that happened a lot! She would remember who people were.

Sometimes musicians don't necessarily have a good reputation for treating production assistants and roadies and crew very well, and it seems like she's just incredibly gracious and graceful and really makes an impression on anyone who meets her.

Buffy is written and produced by Falen Johnson, Zoe Tennant, and Eunice Kim. The podcast launches on June 21, with new episodes every Tuesday.