In the newest episode of More with Anna Maria Tremonti, Youtube star Elle Mills talks about the attention economy, the importance of offline time and why being vulnerable in front of millions can be easier than being vulnerable with your own mom.

'I'm almost just talking to the open to anyone who would want to listen.'

Elle Mills has what a lot of kids aspire to these days. At 21, she makes a living creating YouTube videos — and a really good one at that.

Her channel ElleOfTheMills has almost two million subscribers. She's got an agent. She makes appearances. And she's got fans who love her and want to talk to her.

Thing is, she has trouble talking to them. In real life, that is.

Mills is very honest on YouTube; she opens up about tough subjects like disordered eating, mental health issues and coming out. But when it comes to talking about those things face-to-face, she struggles, even with her family.

In the newest episode of More with Anna Maria Tremonti, Mills talks about the attention economy, the importance of offline time and why being vulnerable in front of millions can be easier than being vulnerable with your own mom.

Let's talk a little bit  about your great success. You went to more than a million subscribers in less than a year. What was that like for you?

It was crazy. I grew up watching YouTube and so that was like the ultimate dream for me. And I remember that I had around like 15 to 17-thousand at the beginning of the year. And that's when I dropped out [of school].

It was a little bit of a time crunch for me because I felt like I had to prove myself to my parents and to prove that this is a legitimate thing. And so I worked very hard. I was posting like three times a week. And just kept on consistently posting and trying to do bigger and greater ideas.

And things started to work out.

I started going to more events. I signed to my management. And it was definitely a lot.

By the end of the year, I was feeling the pressure. And I was feeling really overwhelmed but I was very happy because it's everything I ever wanted and it was all happening so fast. It was a little bit hard to keep up with, but ultimately it was a dream come true.

The video a lot of people talk about when they talk about you making it big is the one where you came out as bisexual.

What was it like to press publish on that one?

It was a lot. I remember feeling like my face was really hot. I felt like I couldn't breathe. It was just really nerve-wracking. I was super anxious, especially because that was my way of coming out to a lot of my friends and family.

And so I felt like I was more nervous about the reaction from my personal life rather than online, but obviously that does play a toll on my anxiety. But once I hit publish, in like an hour I felt super good because of the amount of love I was receiving. I expected it to be a good response but I couldn't have imagined how much love I was receiving. And so yeah that day is definitely one of the highlights of my life.

At the very end of that, your mom she comes out of the car, she sees the garage, she hugs you. And she is kind of off mic but she says something to the effect of "I expected this" or "I knew this." And it was such a beautiful moment.

I was definitely most nervous to tell her because we're not a very vulnerable family. We don't really talk about our feelings too much. And so that was probably the most vulnerable moment we've ever had. And having it captured on camera, it's a beautiful thing.

I knew as soon as she cried I was going to cry. And so I was hoping she wouldn't cry. But then she did and I started crying. But yeah, it was a lot.

A lot of people think I'm very open and raw and everything, but when it comes to the people I love most it's very hard for me to do that.- Elle Mills

You're not a vulnerable family together? But you film all that. That sounds like that's kind of a contradiction to me.

I know. It's crazy because I know what it looks like from the outside in. But when you're in the family it's surely not like that. Like there's certain videos — I don't know. I made a video about my mental health and my mom and I have never discussed it since, like ever, face-to-face.

It's kind of just one of these things that we kind of sweep under the rug and we don't talk about it. But it's kind of like I'm telling her through my videos. And that's how I kind talk to a lot of people in my life. I talk to them through the videos and I hope they get the message and we just never discuss it after.

Which is not a very healthy way of doing it. But that's how I've been doing it for the past two years and so, yeah. I feel like a lot of people think I'm very open and raw and everything, but when it comes to the people I love most it's very hard for me to do that.

Does that bother you?

I mean I feel like I'm definitely getting better. I feel I'm getting better because I've been able to experience a lot more and I've learned the hard way that you know just being honest and communicative, it goes a long way. I feel like definitely for the people in my family and some of my friends it's still something that they have to learn.

And so it's still a learning process. But I mean it is what it is. And we're definitely working towards being more open and honest. 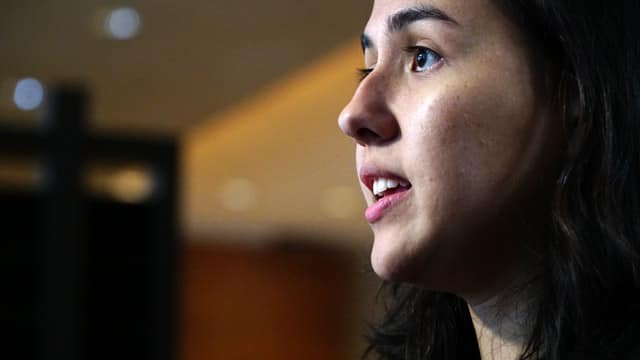 2 years ago
3:00
From stars like Elle Mills to Louis Cole, YouTube has some formidable talent creating content on a daily basis. The constant drive to pump out new videos is what keeps them on top, but it comes at a price on their mental health. 3:00

I mean, I guess I just don't think about it too too much. Growing up ... I never talked about any other feeling besides being happy. And so I feel like once YouTube started picking up that's when I started to feel emotions really intensely.

I felt like I just can't keep it in anymore. From the past experiences I know that it isn't healthy for me... I still find it hard to talk face-to-face with people. So I find that talking about it online is a way for me to vent and get my feelings out without having to deal with that face-to-face vulnerability.

It is kind of like I have to do it or else it won't end well.

You know because I watched the video you did "Burned Out At 19." And I have to tell you: I'm decades older than you and I watched that video and I so related to you. And you talked about 'this is all I ever wanted and it's not enough.'

And I've been there, but I never would have had the guts to say a word to anybody. So when you do that like you're looking at the camera and you're talking, who are you talking to?

And when I post it, I know there's a lot of people who are going to watch it. But it's kind of hard to visualize how many  people will watch it when it's like online like that. And so I try not to think about it. And I'm almost just talking to the open to anyone who would want to listen.

Talking about it online is a way for me to vent and get my feelings out without having to deal with that face-to-face vulnerability.- Elle Mills

How's your mental health now? How do you feel?

Quite honestly it's been tough.

I feel like it's a long process. It doesn't go away overnight. And you know I'm working at it and I feel like I'm more in communication with friends a lot more and trying to seek help. And so it's getting better for sure.

And that's really important for people to know though, right? Because sometimes it gets glossed over as, you know, "I'm better now. Everything's okay." But it's like maintenance. It takes time.

Yeah, absolutely. And I feel like that's something I'm still kind of learning. It's kind of like "Why am I not better yet?" but you know it's about progress. That's a good message to send out.