Winnipeg veteran helps man who stabbed him change his life

Jonny Meikle was hailed as a hero after he was stabbed while stopping Devon Henderson from attacking another passenger on a bus. But instead of being angry, Meikle got curious, and when he learned Henderson's story he knew he had to help Henderson change his life.

'You're my big brother now' says Devon Henderson to Jonny Meikle, two years after stabbing him on a bus 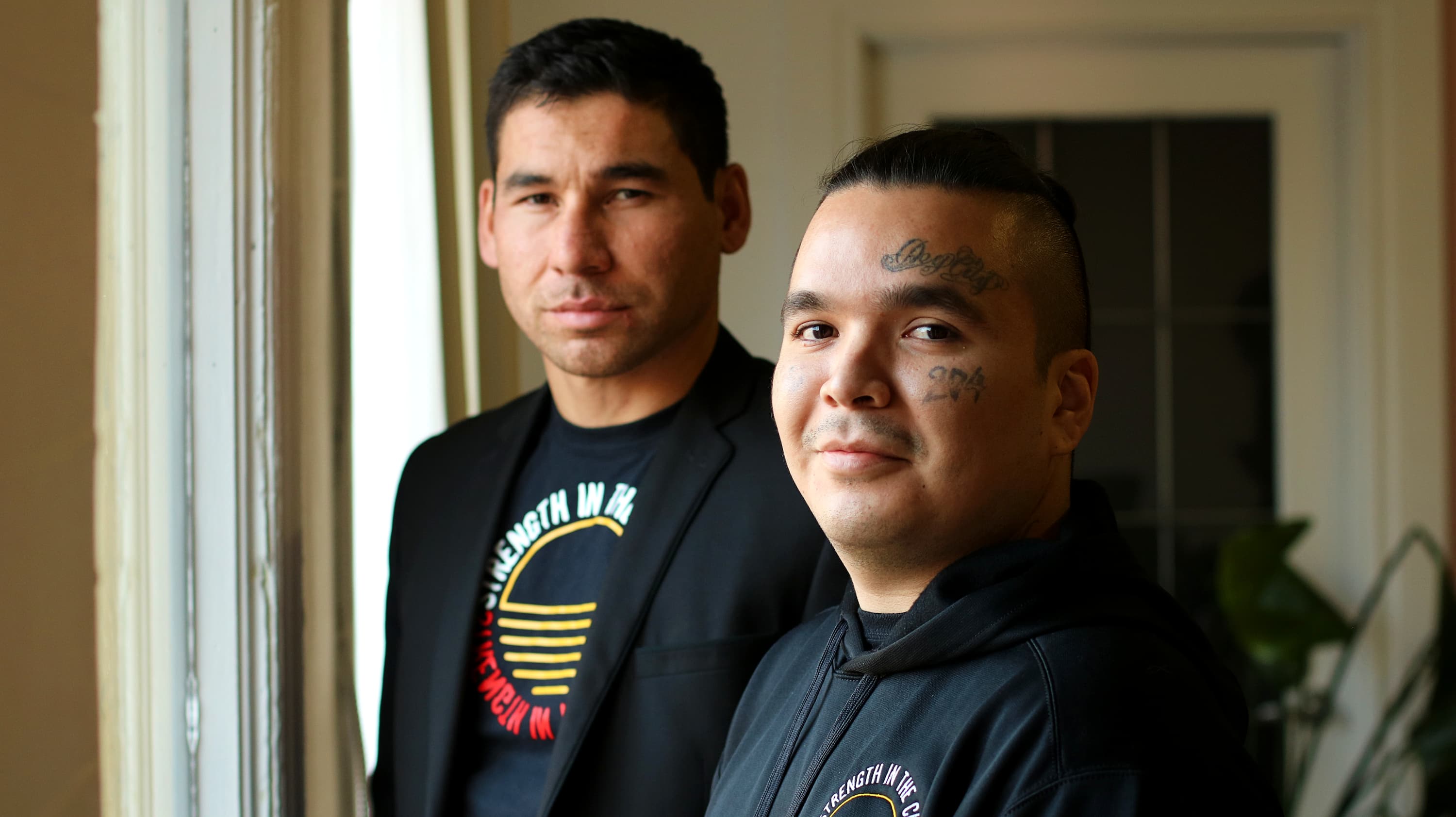 2 months agoVideo
5:18
Two years ago, when riding a Winnipeg city bus, Devon stabbed a fellow passenger. Now, almost two years later, the man he stabbed is picking him up from prison and offering him support and brotherhood. 5:18

"It was right here," says Jonny Meikle, "by then we were already wrestling ... grappling all over the ground here."

Jonny Meikle and Devon Henderson are standing near a bus stop on Main Street in Winnipeg. Henderson asked Meikle to bring him here, to show him the place where he stabbed Meikle two years ago.

Henderson, 25, doesn't remember what happened —he was blackout drunk the night the two men met on the bus. But a lot of people do. It made headlines.

Meikle, 31, was riding the bus with a friend when Henderson got on, dressed in gang colours, and sat near them. Henderson started harassing another passenger, pulled out a large knife and said he was going to stab the other passenger in the neck.

Meikle, a trained boxer and veteran who served in Afghanistan, intervened. He fought with Henderson, trying to get him off the bus and disarm him. Henderson stabbed him in the leg during the scuffle. 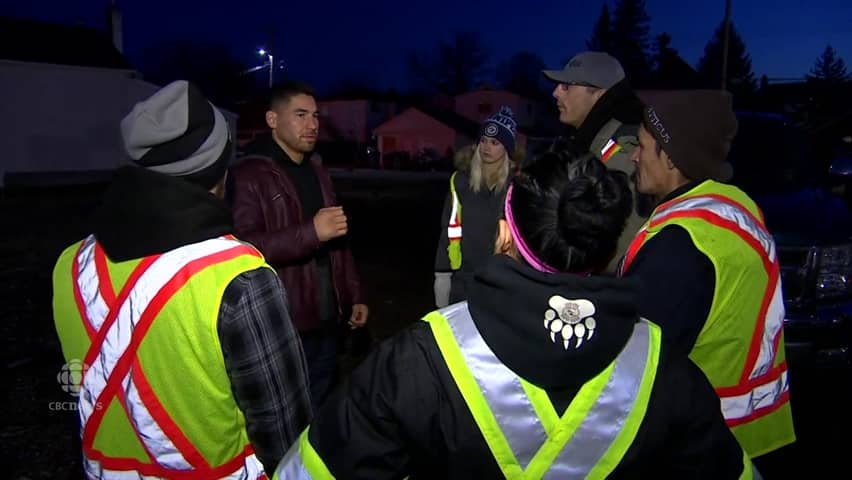 2 years agoVideo
2:31
A man who was stabbed on a Winnipeg Transit bus Sunday says stepping in to prevent another passenger from being attacked "was just the right thing to do." 2:31

All Henderson can remember is "snapping out of it" in the back of a police car, handcuffed and covered with blood.

As Meikle was wheeled past on a stretcher into a waiting ambulance, he saw Henderson's face in the back of the cop car. He saw past the intoxication, the gang colours, and the fact that the 24-year-old had just stabbed him. He saw a young man who needed help.

In the days that followed, Meikle was hailed as a hero. There was a lot of media coverage and he was presented with awards for his actions. But he couldn't stop thinking about the young man in the back of the police car.

"There was more media attention, but they were so focused on the hero story," says Meikle, who started to see that as problematic. "With every hero story you have a 'good guy' and you have a 'bad guy'. And nobody ever wants to know much about that 'bad guy' ... I got very curious. I wanted to know what his story was."

Meikle was determined to find out. He was there in the courtroom when Henderson faced a judge, and shared a powerful victim impact statement. He asked for a sentencing circle for Henderson, hoping to avoid the six year sentence that the Crown was seeking. He asked to visit Henderson in prison, and wanted to build a relationship with him.

It had only been a year since Meikle himself was in prison, battling addictions, and suffering from depression and anxiety. He had turned his life around with the help of rehab and community support. Now, he is studying community development at Red River College and volunteers with several community organizations.

In March, inspired by his new relationship with Henderson and his own journey, Meikle started Strength in the Circle, a grassroots support group for Indigenous men to focus on healing from trauma.

Strength in the Circle follows the Indigenous medicine wheel, and meets several times a week for activities that target the mind, body, spirit and emotional well being of their members. They hold sharing circles, where men come to talk to each other, encourage each other, and work through the hurt and anger they carry.

The fitness crew meets three times a week for workouts, often running through the streets of Winnipeg with their flag and going live on social media inviting people to join them.

They do ceremonies, volunteer with the Bear Clan, and have gone medicine picking together. They swap books to learn more about the history of colonization and their Indigenous heritage.

It's all done without any outside funding, so Meikle and other team leaders are constantly meeting with community organizations, trying to make connections and grow their circle, all in hopes of breaking the cycle of violence, addictions and anger they see in their community.

That's why, on the day Henderson got out of jail, Meikle and other leaders in Strength in the Circle drove to pick him up from the correctional centre.

"I wanted that to be the first thing that he sees when he gets out: family and community and just showing that we're ready to support him," says Meikle.

"It's the first time [I've met] guys who want me to do good, who don't want me to do negative things that could wind me back up in jail," says Henderson. "It just feels good. I finally have family."

Henderson has never known this kind of support. He went into the care of the child welfare system when he was just three months old. His mom was just 14 years old and addicted to drugs, his father was just a few years older and addicted to alcohol, and both were descendants of residential school survivors.

He has lost track of how many foster homes he lived in. His thick correctional case file says there were more than 75, but Henderson says it's more like 100.

"I hated that feeling, like having to go live with a stranger pretty much every week," said Henderson, who was also bullied at school for being a foster kid.

After reading his case file, Judge Heather Pullan, who presided over the sentencing circle in February 2020, said that the system had failed Henderson.

"You never had a chance, from when you were a baby ... to grow up to be the fine young man we all know you are capable of being," said Judge Pullan.

You never had a chance, from when you were a baby.- Judge Heather Pullan

It's hard to argue with her assessment when you read that when Henderson was nine years old, a foster parent made him try crack. He says they wanted to see what it would do to a kid. He was terrified and remembers crying while they laughed.

By age 12, Henderson was using drugs and alcohol every day to cope, and he had a lot of anger. He was arrested for the first time when he was 15, for beating up another kid in a mall. He spent the next 10 years in and out of prison for robbery and assaults. He was often homeless when he was out, and involved in three different gangs both inside and outside prison.

"People in gangs have similar backgrounds like me," says Henderson, who told the sentencing circle he joined gangs in prison for protection. "Before I used to just think, this is what I gotta do to survive, you know?"

But now, things are different. Henderson has severed ties with his former gangs, and now has a whole different kind of support network.

On the morning of October 23, Henderson was released from The Pas Correctional Centre. Meikle and members of Strength in the Circle drove to The Pas, Man. to pick him up and bring him back to Winnipeg, a round trip of 12 hours. The reunion was an emotional one.

"I'm a big hugger," laughs Meikle, "and I knew that was long overdue."

Since that day, Henderson has had a lot of firsts. He wore a suit for the first time, given to him by Strength in the Circle member Jamie Felix, for a photo shoot the group had organized. He has taken a placement test and registered to finish high school. He has turned down invitations from old friends to go drinking, and instead gone grocery shopping for the first time without stealing food.

"I don't see myself coming back to jail," says Henderson. "I've been told everybody says that, but this is the first time I'm saying this."

Meikle and the other members of Strength in the Circle hope to help other people like Henderson. They want to help heal the unresolved trauma many Indigenous men carry, disrupt the child welfare to prison pipeline, and reduce recidivism rates and the high rate of incarceration among Indigenous men.

"Imagine if everyone that stepped foot out of that jail ... imagine if that's the first thing they came into was family, love and support," says Meikle. "There's a lot of Jonnys out there, there's a lot of Devons out there. And if we can change the narrative to one that shifts toward healing we can create so much change in our community."

As part of their healing, Henderson and Meikle went back to the bus stop where they first met two years ago.

The two men offered tobacco and prayers, they hugged each other and told each other they love each other. Then they joined with other members of their circle of support.