Why the classic Canadian novel Bear remains controversial — and relevant

Marian Engel’s Bear is one of Canada’s most controversial novels. But experts say it’s also one of the most daring and enduring.

For decades, Marian Engel’s 1976 book has turned heads with its subversive plot and imagery

Marian Engel's 1976 novel Bear, which tells the story of a relationship between a woman and her ursine lover, has been called one of the most controversial books in the history of Canadian literature.

But experts say the Governor General Award-winning book is also one of the most daring and relevant examples in the Canadian canon, deftly mixing comedic scenes with important themes such as colonialism and our relationship to the wilderness. One expert says it also touches on the issue of Western appropriation of Indigenous stories.

"It teaches the reader … to re-examine their own preconceptions about women, about nature, and about Canada itself.… And that means, I think, it will last for hundreds and hundreds of years."

Bear is the story of a young librarian and archivist named Lou, who is asked to help catalogue the library of an old manor in Northern Ontario. Left mostly alone to her own devices, Lou soon encounters a bear living on the manor property.

She gradually pursues an emotional — and at times sexual — relationship with the bear.

From GG winner to internet meme

Bear most recently resurfaced in 2014 — decades after Engel's death in 1985 — thanks in part to a post on the photo-sharing website Imgur.

A user posted a picture of the Bantam Seal edition of the book, which features a topless woman being embraced from behind by a large brown bear, as well as excerpts of the book's steamier scenes.

"You have some explaining to do, Canada," the poster wrote incredulously.

"We wanted something that was smart and captured the eroticism of the book, but that didn't have the campy look of the one that went viral," a representative from the publisher told industry magazine Quill & Quire.

Upon its original release in 1976, Engel and the publisher received some angry letters. But it also earned glowing reviews from critics, and it became a bestseller that spring and summer.

"William French in The Globe … called it a serious piece of fiction — the best thing she's done, challenging and provocative," said Nick Mount, English lit professor at the University of Toronto and author of Arrival: The Story of CanLit.

It's a book that speaks to a lot of conversations that are happening in Canada in the current moment.- Tania Aguila-Way

It also won the Governor General's award that year, when the committee who chose the winners included Margaret Laurence, Mordecai Richler and Alice Munro.

Beyond Bear, Engel was a prolific novelist and essayist, and in 1973, became a founding member and first chair of the Writers' Union of Canada.

"She was received as a writer who was daring and bold," said Christl Verduyn, an English professor at Mount Allison University in New Brunswick and author of Lifelines: Marian Engel's Writings.

When inevitably asked by peers and interviewers on her inspiration for the book, Engel remained furtive.

"Well, I do know, but I'm not telling, OK? It's been a personal theme for many, many years," she replied.

WATCH: Engel talks about Bear with Joyce Davidson, host of CBC's Authors, in 1978. 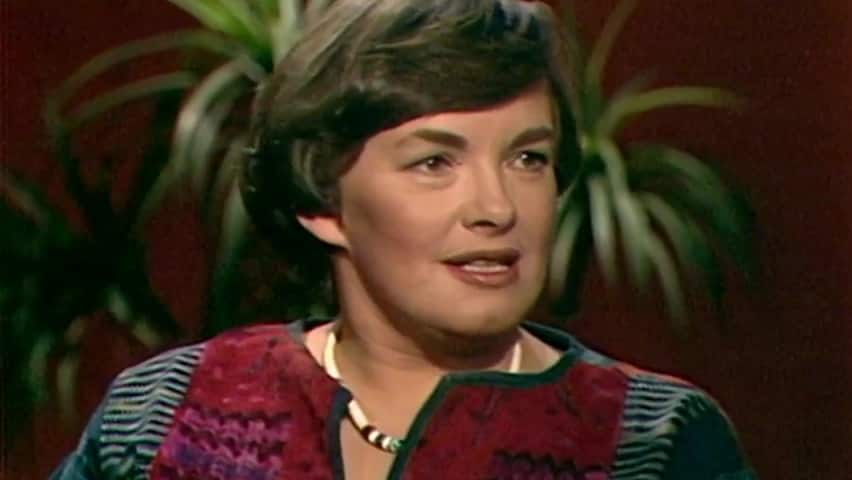 In the same interview, Engel did say that she was influenced by the Haida story of the Bear Mother, or Bear Princess, as introduced to her by Haida sculptor Bill Reid. However, she mainly worked from a version of the story recorded by Marius Barbeau, a French-Canadian ethnographer and folklorist.

Tania Aguila-Way, an assistant professor of English at the University of Toronto, notes there are no direct references to the Haida Bear Princess myth in the text, though there are numerous mentions of bear folklore.

She wonders if Engel was "subtly wrestling" with how she adapted, if not appropriated, an Indigenous story into her fiction.

Throughout the story, Lou's advances on the bear become more frequent and aggressive. Aguila-Way says it might be a form of "settler self-Indigenization, or the settler-colonial impulse to claim connection to the land" via an animal or plants associated in some way to Indigenous mythology.

That connection is made more explicit in Lou's conversations with Lucy, an elderly Indigenous woman and the bear's informal caretaker. But it's later derailed when Lou gets down on all fours in an attempt to consummate their relationship. The bear instead swipes at her, leaving a gash on her back.

Lou carries the new scar on her back "as a sign that her guilt has been absolved," Aguila-Way explained. But she adds it's ambiguous as to whether Engel is perpetuating a story that appropriates Indigenous lore, or lampoons it.

"She feels as though she has been healed; made innocent. But … I think the novel ultimately does ironize that feeling of wholeness that Lou leaves with us as she goes back to the city," she said.

This complex Indigenous-settler dynamic might make Bear a more relevant text now than ever, Aguila-Way argues.

"Often when those questions are raised, people think that they're just a manifestation of contemporary 'woke' culture. But, you know, reading something like Bear reminds us that that question of appropriation and the sort of settler colonial desire to possess Indigeneity has long been a part of Canadian culture."

Mount lauded Engel as "a very witty, very funny, very smart and deeply ironic writer," adding that her signature style set Bear apart from Canadian literature at the time, much of which was very earnest.

And yet, she accomplished this while using many of the genre's hallmarks (or stereotypes): the protagonist's relationship with the untamed wilderness, and a reflection of the old-stock, Victorian English character of Canada slowly being overtaken by the increasingly diverse, cosmopolitan city folk in Toronto.

"There's a line, and I think it's the first actual sexual encounter between her and the bear where she [Lou] says: 'Eat me, bear,'" said Mount.

"And you know, depending on how you read it, that is either the worst line in all of Canadian literature, or it's one of the best."