Whenever Kenrick McRae uses his car, he does a thorough spot check. But no matter how scrupulous he is, the Black Montreal man can't avoid being stopped by police. He's been pulled over dozens of times, and an ex-RCMP officer who helped him file complaints against city police says his experience is not unique. 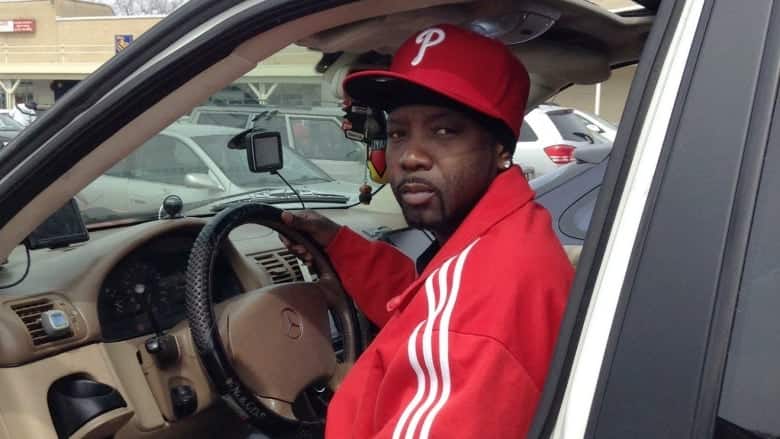 Whenever Kenrick McRae uses his car, he does a thorough spot check first. Before he gets in, he walks around the car, even testing the brake lights by putting a brick on the pedal to verify that the lights are on.

"I always want to be on the right side of the law," he told CBC's The Doc Project radio program.

But no matter how scrupulous he is, McRae, who is Black, can't seem to avoid being stopped by Montreal police. He's been pulled over dozens of times, he says, some months, as many as 15.

"They might say some kind of light is not working, [or] they thought I didn't have my seatbelt on, but when they come up, they see the seatbelt is on," he said.

Montreal police declined The Doc Project's request for comment on McRae's experiences. A representative wrote that the force does not discuss specific cases, particularly those that have been brought before Quebec's police ethics commissioner, as McRae's complaints have.

McRae, 48, has filed five racial profiling complaints against Montreal police with the help of the Centre for Research-Action on Race Relations (CRARR), a Montreal-based civil rights advocacy group.

Two were settled through conciliation; one was dismissed by the police ethics commissioner; and in a fourth case, the province's police ethics committee ruled in McRae's favour and ordered the suspension of the officers involved. The Quebec Human Rights and Youth Rights Commission recommended that the city and officers pay damages to McRae, but the deadline for that passed, and the case is now likely to go before the provincial Human Rights Tribunal.

One complaint, over a ticket for being a driver under the influence of alcohol that McRae received in August 2019 while clearing out empty containers from his car, is still in progress.

McRae's experience is far from unique, says Alain Babineau, a retired RCMP officer who spent more than three decades in policing and helped McRae file one of his complaints.

Babineau said he has encountered others who say they've been stopped as frequently as McRae.

"Those are the folks that come forward. Not everybody that gets racially profiled comes forward," said Babineau, a McGill University law graduate who now works as a civil rights advocate.

Civil rights advocates in Montreal have been trying to shine a light on cases of alleged racial profiling by police for over a decade.

In 2019, a report commissioned by the City of Montreal that looked into street checks, found Indigenous people and Black people were four to five times more likely than white people to be stopped by police.

"It's horrific because they've accepted this as being their plight in life, and at some point, you have to develop some type of anger and animus towards law enforcement," said Babineau.

Following the release of the 2019 report, Montreal Police Chief Sylvain Caron said he was "very surprised" by the findings but vowed to take quick, concrete and transparent action to reduce racial disparities.

In July 2020, after a series of consultations, the police service introduced a policy on street checks with guidelines outlining when and how officers could stop people.

Ticketed while taking out recycling

McRae, who was a police officer in his native Guyana, moved to Montreal in 2006.

He'd initially hoped to continue his career in policing, but he doesn't speak French, which ruled out that possibility.

Eventually, he found a job as a brake rider at Montreal's Trudeau International Airport, towing planes around the tarmac before and after takeoff.

It was a well-paying job, McRae said, enabling him to buy a used 2002 Mercedes SUV.

But soon, he said, he found himself being regularly pulled over while driving to work.

In one instance last August, McRae was stopped by a police officer while throwing out some cups and cans from his car with his recycling just outside his apartment building.

He was issued a $486 ticket for "being the driver of a road vehicle, having consumed alcoholic beverages" after an officer pulled an empty beer bottle from his recycling. McRae said he was neither drinking nor driving his car at the time.

He said he initially refused to show the officer his ID but gave it to her after three more police cruisers arrived on scene.

McRae said this and other experiences with Montreal police have given him a clear impression.

"I'm not worth it, you know, living in this society."

He said he'd move away from Montreal but that he can't leave the city because he co-parents a teenage daughter.

'We don't have systemic racism'

Filing individual complaints against police as McRae has done has hardly made a dent in the wider problem of racial profiling, says Babineau. He says there seems to be an unwillingness on the part of politicians and police administrators to tackle systemic racism.

"We don't have systemic racism," RCMP Commissioner Brenda Lucki told the Globe and Mail in June when asked whether the problem exists on the force in the wake of widespread protests over racism in policing following the death of George Floyd in police custody in Minneapolis.

She told several media outlets that she was struggling to precisely define the term.

Their comments sparked an outcry. Lucki and Zablocki quickly walked them back, acknowledging they had more to learn on the subject.

Babineau said it's frustrating that police leaders are still trying to catch up to the problem when people of colour in Canada have been highlighting it for decades.

"It's a very simple question with very complex answers," said Massimiliano Mulone, an associate professor of criminology at the University of Montreal.

Mulone was one of the co-authors of the 2019 Montreal street check report and is currently studying the impact of the police's new street check policy. In cities across the country, he said, the data suggests that Black and Indigenous people are stopped at higher rates than white people.

The reasons why aren't just the fault of police, he said; the disparity reflects bias and prejudice that exist more widely.

Mulone saw similar levels of racial discrimination when street checks were prompted by a call from a citizen, for example.

"You cannot put all the fault on the police, but at the same time, you cannot say the police doesn't have any responsibility in this systemic discrimination," he said. "It's not just a police problem; it's a society problem."

"Police officers work a lot on the premise of suspicion ... [In] their experience, they think that race is an important determinant of suspicion."

'You become part of the culture'

Babineau said he witnessed and participated in systemic racism during his 28 years in the RCMP, mostly stationed in Ontario.

"Even if you're a racialized police officer, you become part of the culture in which you operate," he said.

"I was part of the drug squad for 10 years. So, we're targeting so-called high crime areas. And you end up targeting a particular community and developing these particular stereotypes in your mind as to who's involved in [criminal activity]."

Babineau said that sometimes led to communities being over-policed by officers who were intent on making arrests.

To date, there's been some progress in certain Canadian jurisdictions, but overall, improvements have been limited, Babineau said.

For example, the new street check policy introduced in Montreal last summer prohibits "any police checks that are unfounded, random or based on a discriminatory criterion." But, in Babineau's view, it will do little to curb racial profiling because it doesn't lay out sanctions for officers who break the rules.

He suspects the policy was an effort to make it look like the city was taking action in a summer of protests over police brutality.

The Doc Project reached out the Montreal police service about the street check policy, but they declined to comment.

Furthermore, Babineau said, traffic stops such as those McRae encountered aren't included in the policy, which focuses on pedestrian stops.

Mulone said he would like to see racial discrimination become a criteria when it comes to evaluating the effectiveness of police programs. He also wants to see police services shift their primary purpose from fighting crime to creating a sense of security in the communities they serve.

A toll on mental health

Niemi has helped McRae file this and other complaints against Montreal police and says while cases can drag on for years, "McRae is someone who will not back down."

McRae said he's prepared to fight but that his experience with Montreal police has deeply affected his psyche.

"I'm scared every day, especially when I go outside."

Babineau said the recurring nature of McRae's negative experiences are likely taking a toll on his mental health.

"You can argue that he's suffering from some form of PTSD, right? Because this happened to him repeatedly," Babineau said. "And that's very serious in my opinion — and here's a guy who was a cop."

*This story was originally published in January 2021. Since then, McRae has been stopped twice more by police. Police approached him while he was cleaning recycling out of his car, which was parked in front of his home. That case is currently before the Police Ethics Commissioner. McRae was approached by police again in May 2021, when parked and preparing to enter a store to buy a birthday present for his daughter. Police said he matched a suspect they were looking for. McRae doubts this explanation, believing he is being profiled.