As the space station marks 20 years housing humans, Canadian astronauts on its importance — and future

Nov. 2 marked 20 years of continuous human habitation of the ISS. Canadian astronauts Dr. Robert Thirsk, Col. Chris Hadfield and Dr. David Saint-Jacques have all worked on and lived in the International Space Station, and they share their thoughts on the ISS — and what comes next.

The first piece of the ISS launched in 1998. Two years later, the first humans began living and working there

Day 67:22As the space station marks 20 years housing humans, Canadian astronauts on its importance — and future

Given the choice between a desk job and flying into outer space, most people would likely at least consider their options before choosing the latter.

But when now-retired Canadian astronaut Dr. Robert Thirsk found himself faced with the possibility of a managerial role with the Canadian Space Agency (CSA) or the opportunity to be one of the first Canadians to carry out a formal International Space Station mission, he didn't express very much hesitation.

"[My boss] called me into his office one day and said, 'Bob, Canada is going to join a new project called the International Space Station, and we think that you would be Canada's first representative for a long-duration space flight,'" Thirsk told Day 6. "Of course, you know my answer. I said, 'Yes, I'd like to fly in space again.'"

Though the first piece was sent into orbit in 1998, Nov. 2, 2020 marked 20 years of human habitation of the International Space Station (ISS). Since then, more than 240 astronauts, cosmonauts and even tourists from almost 20 countries have been to the ISS.

That honour goes to Col. Chris Hadfield, whose work installing the Canadarm2 — a 17.6-metre-long manipulator system that allows astronauts to assemble and maintain pieces of the station — was pivotal in building the ISS from a series of component parts into a fully-functioning habitable artificial satellite.

"In 1996 or 1997, I'd already flown in space once, and the chief of the NASA astronaut office called me in to say, 'Hey, Chris, we're looking at you for another space flight, and on this space flight, we want you to do spacewalks to build Canadarm2 on the outside of the International Space Station,'" Hadfield told Day 6.

"That was still four or five years before that mission actually happened. That was a hugely exciting day for me."

Hadfield didn't just help build the ISS. In March 2013, the now-retired astronaut and former fighter pilot took over command of the station, becoming the first Canadian to ever lead an ISS mission, which he did until May 12 of the same year.

Of course, while Thirsk and Hadfield have the honour of distinct firsts, they're not the Canadians who have spent the longest time carrying out an ISS mission.

According to the CSA, current astronaut Dr. David Saint-Jacques's 2018 to 2019 mission — which saw the physician, astrophysicist and engineer spend a total of 204 days living and working aboard the ISS — means he can brag that he's the Canadian who has spent the most time aboard the ISS.

"I [was] selected as an astronaut a bit over 11 years ago and I went through basic training, like we all do, in Houston with colleagues from around the world," Saint-Jacques told Day 6. "I was very, very acquainted with the reality of space missions, with how the Space Station works, but it was kind of an abstract knowledge."

He said when he got the call that he had been selected for a long-duration ISS mission, he closed his eyes and asked, "My god, what's my wife going to think of this?"

"So I told my boss, who was calling me, that, yes, I just need to confirm with my wife — but I'm pretty sure we're going ahead," Saint-Jacques remembered.

For his part, Saint-Jacques said the 20th anniversary of human habitation on the ISS is especially notable because it means "20 years ago was the last time that all humans were on Earth."

"And the fact that we have done this together as a concert of nations, I think, is even more significant," he said. "We have not only done the most complex engineering project in the history of humanity, we've done it together among nations that not so long ago — barely a couple of decades — were at war with each other." 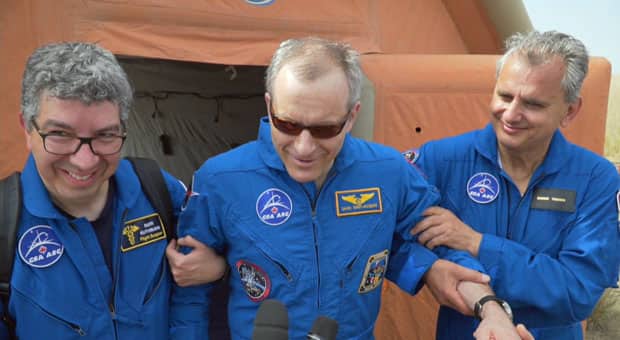 'Gravity is not my friend,' Canadian astronaut says after return to Earth

1 year agoVideo
0:21
Canadian astronaut David Saint-Jacques and two of his crewmates landed in Kazakhstan after a 6½-hour return trip to Earth from the International Space Station. 0:21

As for the how much longer the ISS can remain in orbit, Hadfield explained that the station was originally rated to survive at least three decades in space.

"If the first piece was launched in 1998, then that takes us to 2028," he said. "But that's just a guess. And with maintenance, just like a car or anything else, you can keep things going longer — it's just often the maintenance bill climbs as the vehicles gets older."

Hadfield added that a brand new Russian-built laboratory module for the ISS, the Nauka, is set to launch in spring 2021.

"We've got 20 years of human experience on the station," he said. "We know what we're capable of, we know what's wearing out and what isn't."

"And I think we have a very good shot of operating the station for another decade."

Written and produced by Sameer Chhabra.