Meet Will Rondo, the man behind the NBA's bubble barber shops

Will Rondo is the head of Global Concierge Services for those staying inside of the NBA's pandemic bubble, and the brain behind the campus' barber shops. He handpicked the stylists responsible for keeping the players looking sharp when they go head to head in the playoffs in one of the most unusual seasons of the NBA.

'Barbers in the bubble is definitely an essential aspect to the player. When you look good, you feel good'

Day 67:52Meet Will Rondo, the man behind the NBA's bubble barber shops

Raptors point guard Fred VanVleet was heard crediting his teammate Marc Gasol's mid-series haircut for his return to form in Game Six earlier this week. And there's a team to thank for his new look.

Players of 22 NBA teams have been living in an isolated bubble at the Walt Disney World Resort in Florida since July. And in forming the bubble, the league made some unexpected mid-season draft picks — seven barbers.

Will Rondo is the head of Global Concierge Services for those staying inside the bubble and the brain behind the campus' barber shops. He handpicked the stylists responsible for keeping the players looking sharp when they go head to head in the playoffs in one of the most unusual seasons of the NBA.

Rondo is the older brother of Los Angeles Lakers point guard Rajon Rondo. Years ago, he was just helping his brother adjust to life in the NBA, but since then, he's become the league's major plug.

He spoke to Day 6 host Brent Bambury about how the barbershop came together and life in the NBA bubble.

Why is it so important to have barbers in the bubble?

I think the importance of barbers in a bubble encompasses everything that the player does mentally to prepare for the game. You watch film, you study your opponent, you go through practice and plays and then on game day to prepare, you also want to look and feel your best as well.

So barbers in the bubble is definitely an essential aspect to the player. When you look good, you feel good and when you feel good, you typically play good. So we try to encompass that feeling and vibe and mood and we make sure that each player comes out looking fresh.

And what about your team? How did you build this team? Were there tryouts to be one of these stylists or training camps?

It was definitely a barber draft. I got some suggestions from players all throughout the NBA. [They] called me, texted me, let me know their favorite picks to get inside the bubble.

And then I went through a series of questions from the NBPA [National Basketball Players Association] and NBA on what's going to be required of the person inside the bubble, the length of stay and their availability. A lot of people couldn't just leave their barber shops or salons or their families. You could be here for anywhere from four to 12 weeks inside a bubble isolated from your family and friends.

[They're] the cog that keeps it going as far as keeping players feeling good [with] manicures, pedicures to styles and braids and twists, to haircuts.

Now I would think dealing with an elite athlete is itself a kind of skill. I mean you must have a touch. How do you treat somebody who makes $35 million a year?

I guess just being humble and treating them as if they make $35,000 [per year]. We want to make sure everyone that comes and sits in our chairs feels special, and they have an experience and that we exceed their expectations. Our little motto is respect the unexpected. So when you come in, you're greeted with a smile.

You're placed on the schedule, so when you come in, you feel like a VIP. You're escorted to your chair or your table. Groomers are there with a smile. We have safety equipment in place, with disposable capes to facemask to eye shields, we let them create their own mood.

So when they're in the barber chair, they have full range to turn the TV onto whatever they want, music to control if they want an R&B type of vibe, or jazz instrumentals, to country or soul music — we let them create their own vibe and we just kind roll with it.

These athletes wear the most expensive shoes in the world. Why are pedicures important to someone like that?

OK, so when you talk about the most expensive shoes, they are also on the court getting stepped on, stomped on, tripped on and kicked. So when your feet take a wear and tear as much as they do playing every other day, you want someone to kind of pamper you, take the load off and take care of those sore bunions. 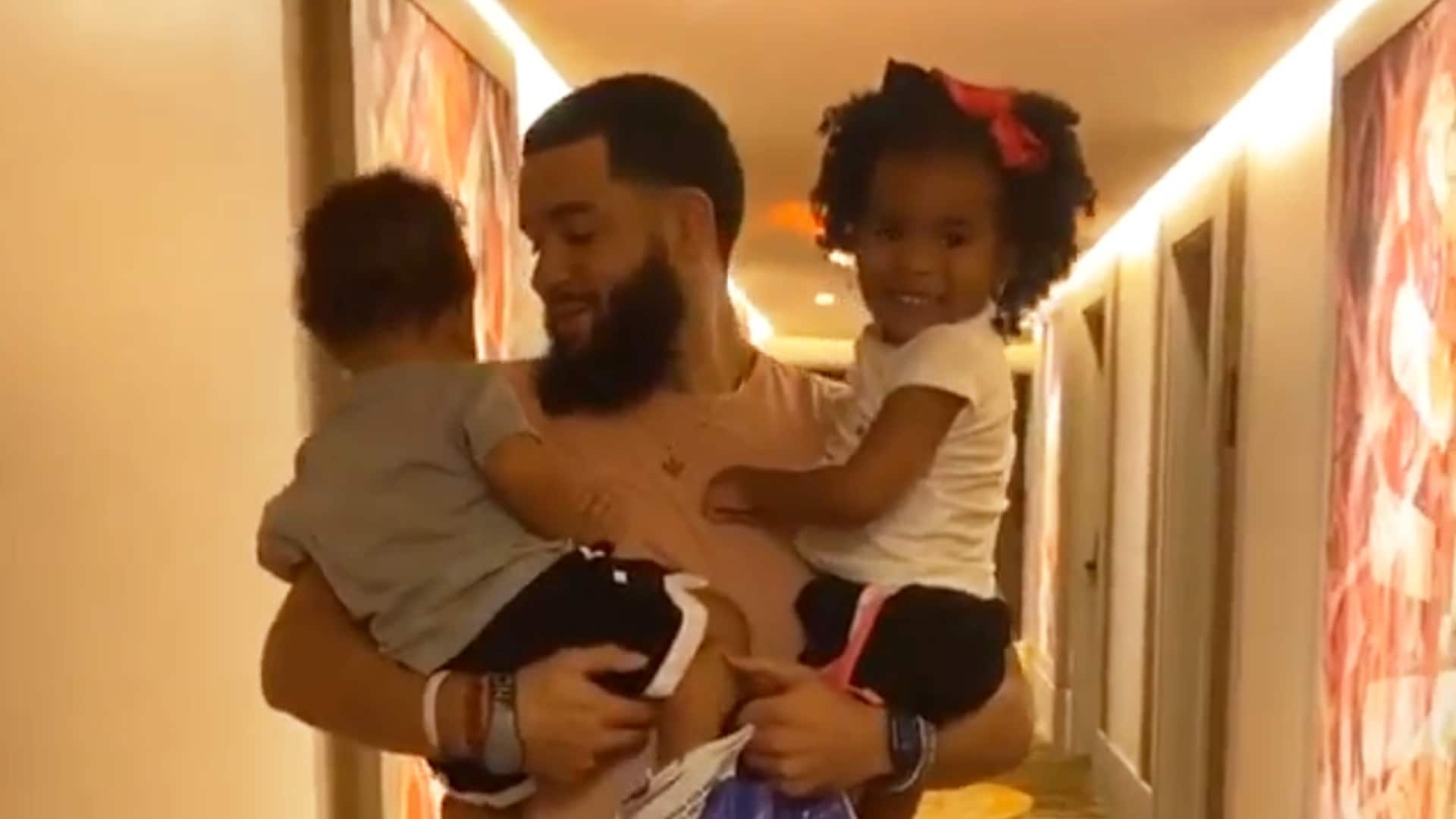 2 months ago
0:32
NBA players have been separated from their families while competing during the pandemic. Families began arriving in the Orlando area last week and went into quarantine before being permitted into the league bubble. 0:32

When there's not a quarantine, when people aren't in a bubble, they go to the barber shop to socialize. Are you building that experience into the shops in your bubble?

As safely as we can. So it's not really a congregation type of point. They do laugh and joke and smile and point at each other in passing. We space out the appointments to where everyone kind of gets that one-on-one VIP alone treatment, whether it be [at the] barbershop or in the nail tech session or a braiding station. But they might come in if they know their friends are getting twisted up or braided or a haircut.

They might come in there and mess with them, high fiving and laughing and joking, but it's not at the original congregation type of level just because we've got to keep up with safety because of COVID.

It has been a remarkable season for the NBA and there's been a clear message attached to it. The Raptors team bus has Black Lives Matter painted on it, players have substituted the names of George Floyd and Breanna Taylor on their jerseys.

Silence is not an option. <a href="https://t.co/qpn8sMo2nu">pic.twitter.com/qpn8sMo2nu</a>

And then, of course, last month the players took a clear stand against racial injustice and police violence after the shooting of Jacob Blake, in Kenosha. What was the atmosphere like in the bubble at the time of that strike?

Basketball is something that brings a lot of people together and it got baseball involved and the WNBA — even tennis. So it was something that I think was felt around the world and a clear message to bring awareness to police misconduct, to systemic racism and to make sure everybody understood the importance of voting and making sure that [your elected officials] are held accountable for anything that's going on in your community.

Written and produced by Samraweet Yohannes. Q&A edited for length and clarity.