The ice roads of Northern Canada are disappearing

This week, people in the Northwest Territories drove along one of Canada's most famous highways for the very last time. The nearly 200-kilometre stretch of frozen paths that connect Inuvik to Tuktoyaktuk will soon be replaced by an all-season, two-lane, gravel-packed road. Russell Neudorf explains what's at stake. Day 67:57The ice roads of Northern Canada are disappearing

This week, people in the Northwest Territories drove one of Canada's most famous highways for the very last time.

As ice melted and slush accumulated on the frozen road that connects Inuvik to Tuktoyaktuk, the inspectors sent out a warning that they are closing the road for the season.

This year, that also means that the road is closing for good.

Russell Neudorf is the former deputy minister of transportation and the current senior project advisor for the Northwest Territories Department of Infrastructure. As he tells Day 6 host Brent Bambury, the road was one of a kind. 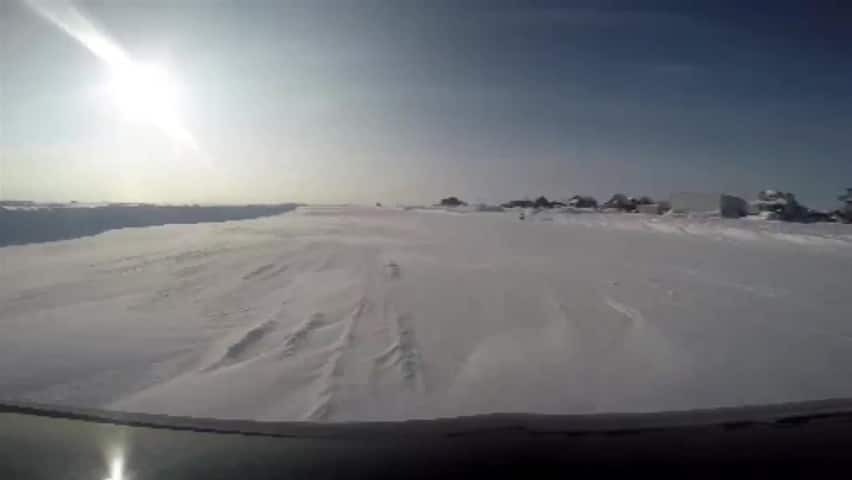 "That was an important one because that was the last one on the Arctic Ocean," he says.

"At the end of that road, when you get to Tuk, you're actually driving on the Arctic Ocean. There's a nice romance to that."

The nearly two-hundred kilometre stretch of ice will soon be replaced by an all-season, two-lane gravel-packed road.

They call it the 'Road to the Top of the World', but for people north on the 69th parallel, it's their first real road to anywhere.

The ice road season is getting shorter

Tuktoyaktuk — or Tuk as the locals refer to their community — is one of seven completely isolated communities in N.W.T.

For decades, the winter road has put that isolation on pause. It provided access for trucks to bring fresh groceries, fuel and building supplies. It meant the people of Tuktoyaktut, which has a population of just more than 800, could get in and out to visit family and friends.

Neudorf says the ice road season usually runs for about four months, from January to April, but it's getting harder to predict when the conditions will allow for safe travel.

"The ice road season is getting shorter for us," he says. "That's because we're getting warmer weather throughout the year. Fifteen or twenty years ago, we noticed something changing and it continues to change. It continues to get warmer."

What's in it for Tuk?

Neudorf is excited about the freedom the all-weather road will provide to the residents of Tuk, and he points out that it's the kind of freedom many Canadians take for granted.

"The rest of Canada — even us in Yellowknife — we expect that if you want to go down to the grocery store, that you'll be able to do that any time of the year," he says.

It also means opening the area to economic development.

As resident Eileen Jacobson told CBC News earlier this month, it means easing costs of more than just airfare. But, she notes, easing access to the community also comes with social concerns.

"Hopefully it will bring the price of the heating oil down," she says, adding that "whatever comes with the good also comes with the bad. Meaning more booze might come in. More drugs."

This year, the Northwest Territories created a campaign to boost winter tourism. The pitch encouraged people to drive the ice road to Tuk one last time.

"There was lots of tourism this year. Lots of people coming up for that one last opportunity," says Neudorf. "I think people will definitely miss driving that ice highway."

As of Thursday, cars should stay off the road. The ruts, slush and water make it too dangerous to drive.  That effectively means the road is no more and Tuk is closed off until the fall when the new road will officially open.

Meanwhile, construction continues on the $300 million highway and the end is within sight. The project is on time and on budget and just this one bridge remains.

When the ribbon is finally cut in November, Canada will be permanently connected from sea to sea to sea and for the first time. It's the realization of a decades-old dream, and for many, a decent way to celebrate the country's 150th birthday.

To hear Brent's full conversation with Russell Neudorf, download our podcast or click the 'Listen' button at the top of this page.