If he were alive today, Dr. Jonas Salk, developer of the polio vaccine, would argue that the key to a successful and effective COVID-19 vaccine is reaching people "in every corner of the earth," and rebuke efforts to patent medical research around it, says his son Jonathan Salk.

Day 68:28What Jonas Salk's approach to the polio vaccine can teach us about developing the COVID-19 shot

The son of Jonas Salk, developer of the polio vaccine, says his father would argue that the key to a successful and effective COVID-19 vaccine is reaching people "in every corner of the earth," if he were alive today.

"We're going to live in a world now where what happens in distant parts of the earth really affects us, so the quest to eradicate a pandemic, it serves our self-interest to help others," Jonathan Salk, a practicing psychiatrist, told Day 6 host Brent Bambury.

In 1955, Jonas Salk unveiled a vaccine for poliomyelitis, an infectious disease that can cause paralysis. Since the vaccine's discovery, polio has been largely eradicated around the world, although it continues to spread in some developing countries.

Today, COVID-19 cases are spiking around the world and vaccine companies are looking for a shot that will slow the spread. This month, pharmaceutical giant Pfizer and healthcare company Moderna announced that trials have found their vaccines to be 95 and 94.5 per cent effective, respectively.

Could you patent the sun?- Jonas Salk speaking to Edward R. Murrow in 1955

As the global vaccine race continues, however, developing countries are worried they'll be left out when a successful candidate is distributed. According to the Associated Press, India and South Africa this month asked the World Trade Organization to waive certain intellectual property rights agreements, including patents, in order to speed up vaccine development and ensure their equitable access.

"Worldwide it would have some traction," said Salk. "I think, of course, the pharmaceutical industries who are developing a vaccine will basically raise Cain about it and fight it at every point." 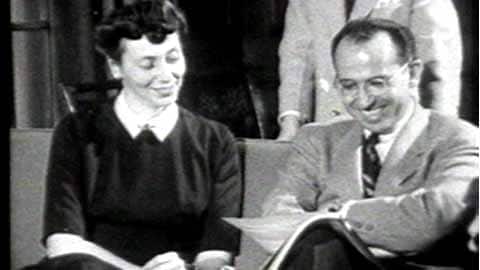 1 year agoVideo
5:12
Jonas Salk's vaccine is proven to be safe and effective against the polio virus. 5:12

Over half a century ago, the elder Salk pushed back on the idea that a vaccine would be patented. "Could you patent the sun?" he told the late journalist Edward R. Murrow in 1955, suggesting his vaccine was natural and essential.

Salk believes his father would feel the same today.

"The purpose of these vaccines is to help people and to eradicate death and eradicate suffering…. That is the biggest priority at this point, and much more important than personal gain."

Writing in The Hill, Salk argues that not only would his father have wished for a COVID-19 vaccine to be widely available to those who need it, he would have "connected it to the transformation we need at this juncture in human history if we are to survive."

That transformation, he told Day 6, is marked by a transition from virtually limitless growth, to limited growth.

"This is a time where in order for us to survive in the very different conditions of the future from what has been in the recent past, it will need to make a transition, in a basic way, from [those] certain values," he said.

Salk adds that in the past, humans focused on the values of competition and independence. As humans move forward, that competitive, independent approach needs to transform to one of collaboration and interdependence, he says.

Salk mentioned anti-vaccination advocates as one example of a movement that needs to be addressed.

"What we see is a tremendous split in our society between those who kind of want to hold on to the old values, and those who want to go on to the new values," he said.

Despite anti-science viewpoints, particularly in the face of the global COVID-19 pandemic, Salk believes there is reason for optimism.

"What our survival will depend on in the future is wisdom, and if we don't acquire that wisdom and use the wisdom, then we're not going to survive," he told Bambury.

"Though we're in such a period of conflict at this point, I really do believe most of the time that we're in the process of making a transition so that that wisdom will predominate in our population and the lack of wisdom will wane."