When Dr. Paul Whitaker began to treat patients who had recovered from COVID-19, he expected to mostly encounter symptoms like lung damage and scarring. Instead, he saw a wide variety of other problems — with some cases persisting for months.

When Dr. Paul Whitaker began to treat patients who had recovered from COVID-19, he expected to mostly encounter symptoms like lung damage and scarring.

Instead, the lasting effects of the novel coronavirus have included a myriad of problems like extreme fatigue, muscle weaknesses and trouble sleeping — with some cases lasting far longer than he thought they would.

"[We] thought, well, they'll pass after a week or two. But a lot of these patients are now two, three, four months down the line, and they've still got the same problems," Whitaker, a consultant respiratory physician, told Day 6 host Brent Bambury.

"We actually completely misjudged the situation."

Whitaker runs a COVID-19 rehabilitation centre at Bradford Teaching Hospitals in the U.K. It was originally intended to keep track of patients who had been in intensive care for COVID-19 and later been released.

But he found that many patients referred to the clinic weren't treated for the virus in hospital at all — and their symptoms had little or nothing to do with respiratory damage.

Whitaker's team has had to grow to include multiple specialists to keep up with the variety of symptoms they've encountered.

"We brought in specialist rehabilitation physios, the psychologist, the dietitian. And every time we encounter a problem, we are recruiting other people into the clinic," he said.

The majority of people who contract COVID-19 suffer mild-to-moderate symptoms and recover in up to 14 days.

But a growing body of research has documented so-called COVID long-haulers, whose symptoms vary and last for months.

"There can be long-term damage, such as higher risk of diabetes, and lung damage that doesn't go away when the infection ends," Alberta's chief medical officer Dr. Deena Hinshaw said in late July. "Regardless of age, we don't yet know what impact COVID-19 will have on your lifelong health." 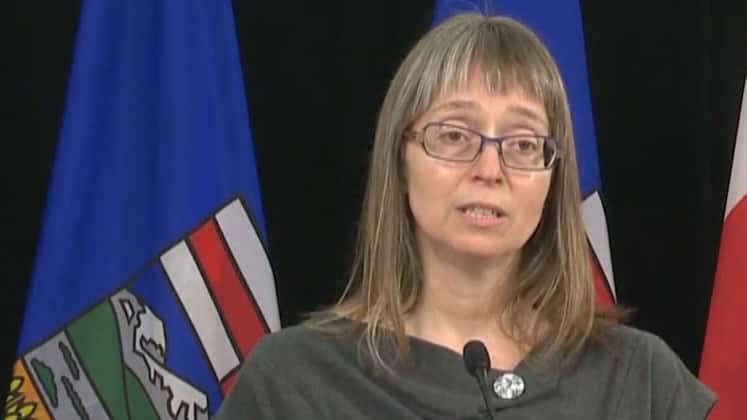 6 months agoVideo
1:34
Find out why Dr. Deena Hinshaw says she is concerned with the lasting impacts of COVID-19 as Alberta sees more hospitalizations across the province, even in rural areas. 1:34

According to The Conversation, an app developed at King's College London tracked over 4 million COVID-19 patients in the U.K., U.S., and Sweden.

The symptoms recorded included fatigue, rashes, headaches, abdominal pain and diarrhea, in addition to the more commonly known symptoms such as fever and cough.

In the early months of the pandemic, some people who tested positive reported losing their sense of smell. Dr. Whitaker says he's seen other neurological symptoms in some patients ranging from drowsiness to, in rare cases, seizures.

"This is something not unique to COVID. You do see it in other viruses, such as Epstein-Barr virus," he explained.

"And whether it relates to the direct viral infection, or whether it's an immune response [to] the infection, is difficult to know."

Whitaker says the clinic recruited a dietitian after observing dramatic weight loss in some patients who experienced a loss of appetite.

"We've had patients who have lost up to 35 kilograms just over a few weeks," he said.

With the help of a dietitian, many of these patients managed to get their weight back up, but often replaced the muscle mass they lost with fat.

"The dietitian is working with them to have a slightly higher protein diet and to really concentrate on muscle building."

Whitaker expressed some frustration at the unpredictability of the novel coronavirus, and not knowing exactly what symptoms a patient will present or how long they may last.

As the medical literature about the new disease evolves, he says, physicians should be able to determine which symptoms can be connected to the virus and which ones are unrelated. But that will take time.

"I think in due course, as people begin to understand it more, we'll piece everything together," he said.