As part of a Cross Country Checkup special on Canadian songs of the summer, the Juno Award-winning musician from Arviat, Nunavut, reflected on her career, up-and-coming Indigenous musicians and her favourite summer tune. 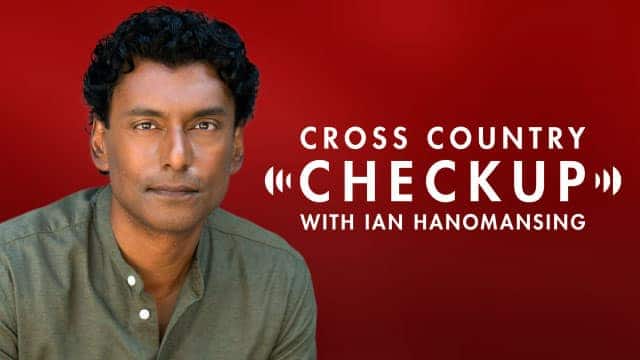 "I'm watching now the next generation of artists who are so much bolder and less afraid — if afraid at all, maybe utilizing fear differently — and so brave," she told Cross Country Checkup host Ian Hanomansing.

As part of a Checkup special on Canadian songs of the summer, the Juno Award-winning musician from Arviat, Nunavut, reflected on her career, up-and-coming Indigenous musicians and her favourite summer tune with Hanomansing.

When you hear that sentence, "Canadian summer songs," what comes to mind?

The artist that comes to mind — and we listened to growing up — was Glass Tiger.

So there's a song that they released many, many years ago called Diamond Sun. And that's a favourite of ours, obviously, now. But, for sure, Glass Tiger is one of those bands you want to go listen to live over the summer festivals.

And you have a connection to them.

Yeah, I do actually. And who would have thought that I would get a chance to do a song with Glass Tiger when Alan Frew wanted to do a reimagined, rerecorded [version] of some of their hit songs, with the album called 31.

He asked if I would translate a verse of his Diamond Sun song, and we ended up recording it together. So that was just one of those incredible moments in my career.

Your career has been incredible, and one of the things that it's done is brought the Inuktitut language to airwaves across the country. Was that something that, when you were younger, you thought, "That's a goal of mine?" Or is it something that just happened?

It's something that just happened ... Inuktitut being my first language, English being my second.

I wrote, initially, all my poetry, all my creations, whatever we called them in the early years, in Inuktitut translated into English. And it wasn't a movement per se. It was just that's the language I grew up with.

So in later years, you come to realize that a lot of our people may not necessarily speak the language. I'm conversational. There's this whole other language that happens traditionally that's quite stunning and a lot of it has survived.... And the movement, of course, is this incredible movement of reinvigorating, reviving traditional language.

[It's] a privilege to be one of the artists who was able to do that from the early part of my career.

What are the differences for Indigenous artists today compared to when you broke in, in terms of getting into the business but also getting airplay?

There's this whole other sense of boldness and bravery ... the word in Inuktitut is ilira. So that translates to there's always this undertone of colonization, and with it comes this feeling of emotional fear.

So in the early years ... of my career, I always kind of had to defer to that ilira in me and kind of break that barrier down. But it was always there.

I'm watching now the next generation of artists who are so much bolder and less afraid — if afraid at all, maybe utilizing fear differently — and so brave. And you see it in their performance, in their writing, in their creation.

That's an incredible thing to observe and to witness right now.

The springtime is this beautiful, beautiful time of the year to be in the Arctic, and you're watching everything emerging fresh.- Susan Aglukark, singer-songwriter

I feel like geography has a real impact on summer songs. There's the whole California sound of the Beach Boys and many other artists since then. And in lots of parts of Canada, it's long days and warm nights and road trips, and all those kinds of things inspire artists. What about for northern artists? Are there things about summer in the North that might inspire musicians differently?

You have to love the North to get this one, but everything about springtime especially gives you this kind of whole new sense of reinvigoration and hope.

The springtime is this beautiful, beautiful time of the year to be in the Arctic, and you're watching everything emerging fresh. So you're kind of drawn to the music that represents that freshness and that sense of hope and brightness.

We talked about the current generation of artists. What about a summer song that comes to mind from a contemporary artist?

One of my favourites — and I was glad to see that she's releasing new music ... her name is Aasiva.

She's got this song [Piqattiikka] that came out in April and it's a collaboration between her and another Inuit artist named Riit, and the piece of music they released is just so hopeful and beautiful.

Aasiva's music, it's like springtime. It's something fresh coming out of a long winter [and] she's got some beautiful music coming out right now.

Written by Jason Vermes. Produced by Arsheen Shamaila. This Q&A has been edited for length and clarity.