With COVID-19 at the forefront of the news, it might be easy to forget that the world is also dealing with climate change. The Nature of Things host David Suzuki addressed the climate crisis in this Sunday’s AMA. 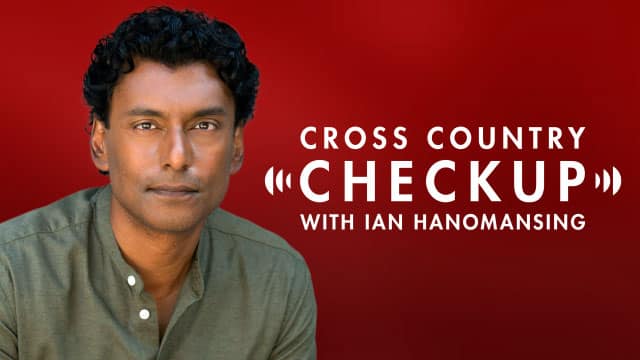 With the COVID-19 pandemic at the forefront of the news cycle, it might be easy to forget about the ongoing climate change crisis.

While managing the pandemic has become the first priority of the Canadian government and other governments around the world, climate change was a major talking point in the 2019 federal election campaign.

This summer, the last intact ice shelf in the Canadian Arctic collapsed. South of the border, dry, hot weather conditions in states such as Oregon and Washington have led to historic wildfires.

David Suzuki is a scientist and environmental activist. He's also the host of The Nature of Things on CBC television.

He spoke with Checkup host Ian Hanomansing about our changing planet and how to tackle climate change in the midst of a pandemic. He also answered some questions from callers.

On yesterday's episode of CBC's The House, Canada's Minister of Natural Resources Seamus O'Regan said about small modular nuclear reactors: "We have not seen a model where we can get to net zero emissions by 2050 without nuclear."

I want to puke. Because politicians love to say, "Oh, yeah, we care about this and boy, there's [nuclear] technology just around the corner."

My God, we need action now. We have to start reducing our emissions. Stop talking about what might happen. That kind of nuclear development is decades away from becoming anything like the possibility to reduce greenhouse gas emissions. We've got to act now.

As you know, we've been talking about the throne speech. If the Prime Minister were to phone you today and ask for a recommendation, what would you ask him to do?

I would first of all say I've been very impressed with the response of his government to an absolutely unique situation for this generation. We're confronted with a novel infection, and they have to make it up as they go. This is a new situation.

The [climate] crisis isn't in the science. The crisis is in the political system itself.

Look at our representative coming back from Madrid at the COP25 meeting last year. [Jonathan Wilkinson] said Canada is committed to net-zero emissions by 2050. That sounds great, doesn't it? No emissions by 2050. [But] that's not a commitment at all. No politician in office today will still be in office by 2050. So there's no accountability.

The planet is not in danger. We are in danger. And there are hundreds of ways that we can begin to reduce our emissions.- David Suzuki

I think that we need to have a government where everybody, regardless of party, starts with a fundamental agreement based on clean air. If you don't have clean air, you're dead. If you have to breathe contaminated air, you're sick.

[We need] clean water, clean soil that gives us most of our food, clean energy that comes from the sun, and a variety of organisms on the planet that deliver those things for us. Everybody should agree with that, not act as if those things are just the price of doing business.

You just listened to a clip from a 2003 Cross Country Checkup caller who called in about the Okanagan Mountain Park fire near Kelowna. What's it like to listen to that conversation from 17 years ago, which in many ways sounds like a conversation that we're having right now?

Yeah, it's taken a child [environmental activist Greta Thunberg] to finally have an impact that is more than all of us environmentalists put together over the past years.

The power of that child is that she's got no vested interest in anything. She's just saying: "Listen to the science because the scientists are telling us I have no future if we don't take some drastic action."

I'm saying: now listen, this youth movement is serious. There are hundreds of thousands of Canadian youth that have been taking part in demonstrations.

All right, mom and dad, grandparents, uncles and aunts, relatives, and friends of those youth. Now, pledge that you will not vote in any election coming up if the candidate or the party hasn't said that climate change is not at the absolute top of the agenda.

What can everyday Canadians do to help stop climate change?

I think the really critical thing now is to vote. Of course, there are dozens of things that we can do, and there are lots of books about saving the planet. But the planet is not in danger — we are in danger. And there are hundreds of ways that we can begin to reduce our emissions.

We need leadership and the commitment of the people that are making big decisions about where we go. Right now, I think all coming elections are going to be really important.

We've got to become a voting bloc that says we will not vote for anybody or any party that hasn't put these issues at the very top of the agenda and is determined to carry them out when elected.

I'm appealing to youth to start circulating a pledge. Get all adults who vote to sign the pledge, and say they're not going to vote for a party that does not put this at the top of the agenda.