Rising from the ashes and smoke in Fort Mac

In the aftermath of the Fort McMurray wildfire, evacuees and Canadians look back on the harrowing journeys of evacuation and the way forward for a city that has long been considered a driver of the Canadian economy.

Fort McMurray evacuees are beginning the long process of coming to terms with what was lost in the flames.

The city's fire chief estimates that 85% of homes in the area are intact: a relief for most evacuees.

Leanne Shannon escaped the wildfires with her family. She's one of the lucky majority whose home survived the flames. When the evacuation order was given on Wednesday, she picked up her children from school and connected with her husband before they made their way North.

After they were safely in Shell Albian Village, they were able to do some little things that gave them some comfort. Shannon said, "[We phoned] our home answering machine and checked our home alarm system. That gave the kids, as well as us, some comfort." 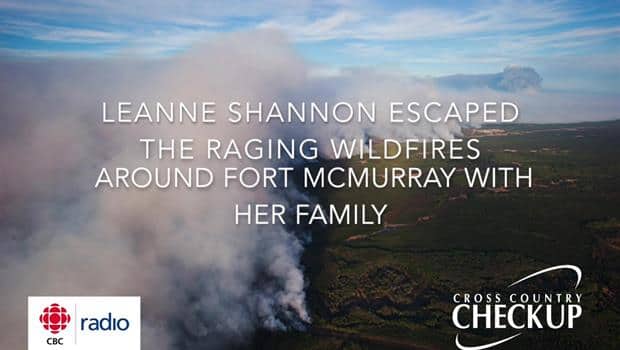 4 years ago
1:27
Leanne Shannon called Cross Country Checkup to share her story of evacuation from Fort McMurray. She was able to leave with her family and get to safety. 1:27

Byron Bourget unfortunately does not have the same peace of mind as the Shannons. With no word about his home, or when he can return, he's feeling the weight of uncertainty. Bourget said, "It's surreal but I'm trying not to think about what's going on, and the position that we're in at this moment. We're living in a campground and we could be here for a few days or a few months. It's the not knowing that's the hard part."

A touching response from Canada

In spite of the harrowing journeys out of Fort McMurray, many found solace in how the evacuation was handled. Mike Allen, a former MLA for Fort McMurray and evacuee, said, "We had 90,000 people evacuated from the community with no fatalities, and no injuries. People were being courteous! Even when there's flames and sparks, and you're not sure if your car will catch on fire or if you'll even make it out of there, people were still signalling and letting others in."

And outside of the community, the reaction from the rest of Canada made an impact on Allen. "It's amazing the supports that have sprung up instantly from cities, communities, and from across the country," he said. "It makes you tear up a bit when you're involved with it firsthand."

It's been apparent from the donations and messages of support given from Canadians across the country that this is a time to stand in support with Fort McMurray. One Checkup caller, Blair Matheson from Glace Bay, Nova Scotia said, "Those [oil field] workers, especially the ones from the East Coast, gave so much to our country's economy, now we have a chance to thank them."

The Fort McMurray fire grew exponentially in the days leading up to the evacuation, and has continued to grow this week. Since it combined with an adjacent fire, the latest estimate of its size puts it at 229,000 hectares. Although it has moved away from the town of Fort McMurray now.

Fire ecologist Robert Gray says that the assessments of wildfire risk around Fort McMurray would have taken into account that the wildfire could have grown this big, but as an unlikely circumstance. The severity and risk of wildfires in Western Canada is increasing drastically compared to historical patterns.

"We have an over abundance of fuel in our woods. In our driest ecosystems, we've missed ten or so rotations of fire," he said. "Basically, fires occurred frequently but we've put them out so effectively that those areas are in a fire deficit. What that means is that we've had a significant accumulation of fuel in our forests."

Management of wildfires, according to Gray, entails starting fires in a controlled way, rather than waiting for them to start naturally. Further it involves minimizing risks through "up-front thinning, changing vegetation, and following up with prescribed burning." Otherwise, it may result in cities like Fort McMurray being damaged.

Paul Kovacs is an expert in disaster resilience and he works with communities that have to bounce back from wildfires such as this one. Rebuilding Fort McMurray will depend firstly on whether or not the ground is safe to rebuild. "There may be toxic chemicals that build up from the ash falling from the fire...It wasn't just trees that burnt here; houses burned to the ground, as well as cars and other things. All of this has gone somewhere, often into the ground."

As many homeowners are looking towards insurance adjusters for information on rebuilding their homes, Kovacs says its the infrastructure that will really determine when people can return home. "You can start the process of rebuilding a home or business, but you can't move back into a community unless all the essential services work. You need a water treatment facility, electricity and telephone services, and access to supplies."

Information is still coming in about the state of Fort McMurray's infrastructure. Mayor Melissa Blake has stated that most of the critical infrastructure of the city is intact, and that a large team is already working to get capacity back up.

And Fort McMurray evacuees wait and watch for the news they can return home, Canadians who have undergone similar disasters shared advice, some practical and some inspirational.

Dick Killam called Checkup with this message: "My wife and I lost our home and business in a fire a few years ago… Because of a lot of problems with reconstruction, we had to sue both the insurance company and the contracting company. It took us six years to get completion and we never were put back right. We lost our business and we're now living in a different place. It totally changed our lives."

"My suggestion would be for people, if they're having problems with their insurance already, they should hire a lawyer and possibly an independent adjuster. If we had had those professionals with us from the beginning, I doubt we would have had to gone through a six year legal battle."

Suzanne Young lost her home in Kelowna to a fire. The devastation and trauma that she experienced that day was assuaged by some advice that she now passes on to evacuees from Fort McMurray: "Be brave, and if you can't be brave: fake it, because no one will know the difference."