After years of suffering with Crohn's disease, Brittany Ferreira was forced to have her colon removed. At just 23, she wore an ostomy bag - a medical device that's usually associated with the elderly. Now, she's dealing with mounting insecurity about her body, as she figures out how to embrace it. 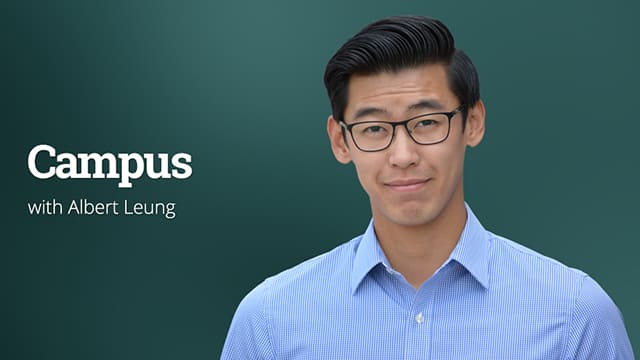 This week on Campus we're tackling insecurities around body image.

After years of suffering with Crohn's disease, Brittany Ferreira was forced to have her colon removed. The surgery saved her life, but she was now facing a whole new challenge.

You just get up and you're like, 'Man, it would be nice if I didn't have a bag hanging off my stomach.'

Brittany Ferreira, like many kids, simply enjoyed hanging out with her friends. She went to the mall and the movies after school, and loved playing outdoors. "I had a really wonderful childhood. I was an only child, but I had lots of friends at school and I just remember always playing, always being happy, always laughing. I was very carefree, you know?" In particular, Brittany loved hosting slumber parties. And during the holidays, she decided to invite all of her girlfriends over to watch romcoms, paint their nails, and have virgin cocktails.

I woke up and I was still not feeling well. I was still vomiting, I was still having stomach pains. And you know, thinking it was the flu, we decided to wait it out for maybe a day or two, and it didn't improve.

During that party, she became extremely ill. "I became very nauseous and very dizzy quite quickly. So I went into the next room, and I remember calling my mom in, and she was checking my forehead, and she said I was running a low grade fever. So I'm thinking maybe it's the flu," Brittany recalls. Unfortunately, that night would be the start of Brittany's life-long struggle with chronic illness.

Over the next few months, Brittany saw countless doctors to try and figure out what was causing her illness, but no one had answers.

I was just so tired of not being able to be myself. I felt robbed of the ability to be me because I was so consumed with surviving.

In addition to constant nausea and stomach pains, she needed to use the bathroom between 15 to 30 times a day. It became impossible just to get through a school day. She started missing classes because she was too ill to make it to school. And then she began withdrawing herself from friends.

Without the comfort of having complete accessibility to washrooms at all times, Brittany just wasn't able to do things that average teenagers did. She stopped going to the movies, parks, or the mall. "It took such a toll on me to do these things that I ended up just slowly isolating myself and staying home," she remembers.

Just before she turned 16, Brittany became bedridden as her body deteriorated. She had lost a shocking 40 pounds, and needed her parents' help just to go to the bathroom.

I thought I was dying because my body was just shutting down. In my heart, I thought, this is it. This is how it's going to end.

At this point, Brittany had given up. "I remember one night, I went to bed, and as I was drifting off to sleep, I told myself that I was okay with not waking up the next morning," she said. The next day, Brittany's parents drove her to the hospital, where they finally discovered the issue -- she had Crohn's disease. "I finally felt like I was out of this fog. I could say, okay, it's a chronic illness, but these are the steps that need to be taken," she recalls.

But following an annual colonoscopy, doctors found pre-cancerous cells, and recommended major surgery to have her colon removed. As a result, she'd permanently live with an ostomy bag - a medical device that sits on the abdomen to collect waste.

The thought of surgery frightened her. People often asked, "Are you sure you want to go through with this? How's your your body image? Are you single or are you dating?"

Over time, Brittany came to terms with the idea of having an ostomy. She soon realized that the surgery might give her the freedom she's always wanted.

LEARNING TO BE DIFFERENT

When she woke up in recovery room, she was filled with regret. Now, she was faced with a whole new set of challenges: how was she going to learn to overcome the insecurities of having an ostomy bag hanging from her abdomen?

This is not a cure, but I feel like me. And I haven't felt like that in over 11 years, and I didn't even know who I was. The illness became my identity and it was awful when it was like that. And this surgery saved my life.

Brittany went to a grocery store, where a few people noticed and looked away. But she realized that the looks didn't bother her as much as she thought. In that moment, she discovered self-acceptance.

Now, it's been over a year since the ostomy surgery. And even though she's still learning to deal with the everyday insecurities of having the bag, she believes that the surgery saved her life.