Biologist Walter Piper and his colleagues spent their summer documenting a pair of loons in a Wisconsin lake that adopted a orphan duckling and raised as it as their own. As It Happens7:01These loons adopted an orphan duckling and raised it as their own

Loons and ducks are usually enemies — but in this case, they're family.

Biologist Walter Piper and his colleagues spent their summer documenting a pair of loons in a Wisconsin lake that adopted an orphan duckling and raised as it as their own.

"We were astonished. We have watched thousands of loon pairs raise loon chicks, and they've always gotten it right and had loon chicks with them and not anything else," Piper, a biology professor at Chapman University in Orange, Calif., told As It Happens guest host Megan Williams.

"In fact, when you see loons interact with ducklings, usually it's aggressive. They attack ducklings and view ducks as their enemies."

The researchers have been documenting the unlikely trio on their blog, The Loon Project.

They first spotted the duckling with the loons near Minocqua, Wis., in June, shortly after the loons lost their newborn loon chick.

"They're sort of hormonally primed to care for something, and that duckling must have come by, having been separated from its mother and siblings just at the right time to find a pair of loons that was desperate to take care of something," Piper said.

A free ride and plenty to eat

The lucky duck hit the jackpot when he found his loon parents, Piper said. Loon chicks live a more lavish lifestyle than your average baby mallard.

For example, while mother ducks lead their young to food, loon parents actually feed their chicks themselves.

"These loon parents wanted to feed the duckling fish, and it turned out the duckling was only too happy to accept," he said.

"It did something that a normal duckling would never do. It allowed itself to be fed, and it fed quite greedily and would rush over to its loon parent when the parents surfaced with food."

The duckling also got a free ride — literally.

While baby ducks follow their mothers around, loons actually carry their young on their backs for the first couple weeks of their lives to protect them from the cold.

"Loons only do it for a very short time, whereas this duckling wanted to — and actually did — ride about on its parents back weeks and weeks until it was about six or seven weeks old. This huge, basically adult-sized mallard standing on the back of a loon," Piper said.

"It made quite a spectacle, and it almost sank its parents."

What's more, the young duck learned a helpful new trick that its brethren doesn't know about.

Mallards are what Piper calls "dabbling ducks." Instead of diving for food, they tip forward and "stick their rear ends up in the air and reach around for vegetation and little squishy invertebrates and whatnot."

Loons, on the other hand, dive deep under water, where the pickings are better. 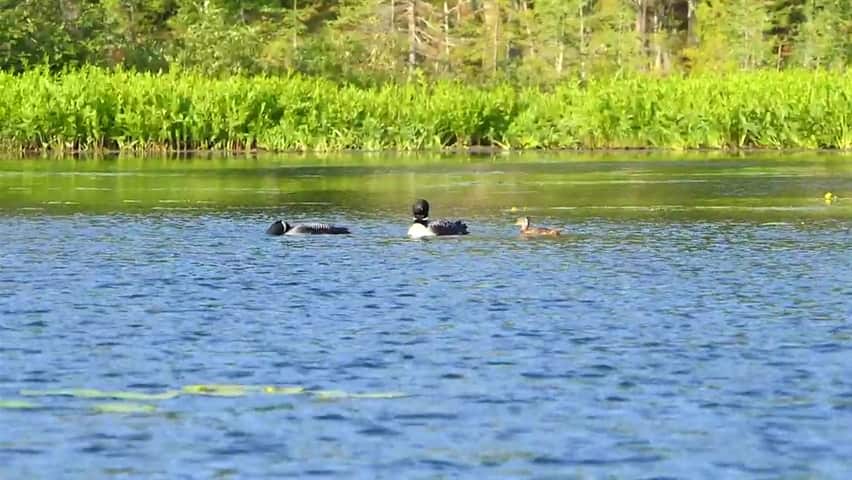 1 year agoVideo
0:30
In a small lake near Minocqua, Wis., a pair of loons have adopted a baby duck and taught it to dive for food like they do. (Linda Grenzer/The Loon Project) 0:30

"This duckling, just like its parent loons did, took on this behaviour of diving for food, and actually we know it went to the bottom of the lake and picked up things like snails," he said.

"That was the most astonishing loon trait that this mallard duckling picked up."

That will be a handy skill-set for the duck as it heads out on its own, Piper said.

One thing loons and mallards have in common is that once they're grown, they fly off and leave their parents behind.

But goodbyes are never easy, even for birds.

"When we last saw these guys, the duckling would fly around the lake as its loon parents looked on anxiously, and then it would, I guess, take pity on its parents as offspring sometimes do and go over and land near its loon parents and hang around with them for a while," he said.

"Ultimately, they all dispersed just as they normally would — whether they're loons or ducks — and they're off on their own now."

It was a goodbye for Piper too. He and his team decided not to tag the mallard for tracking because they didn't want to risk breaking up the non-traditional family.

"It's a sweet story. I've never seen anything like this before," he said. "I didn't want to mess with this family and risk blowing them apart when they had beaten all the odds to stay together this long."