The top 10 weirdest As It Happens stories of all time

Whether it’s a man who plays classical music on his teeth or a chicken that comes back from the dead, As It Happens is there.

From talking pigs to space politicians, here’s to 50 years of keeping radio weird

Our goal every night is to bring listeners on a trip around the world — and the world is a truly bizarre place.

So while we always strive to bring you important, hard-hitting interviews, we never let that stop us from shining a light on the weird and the wonderful.

Whether it's a man who plays classical music on his teeth, or a chicken that comes back from the dead — As It Happens is there. 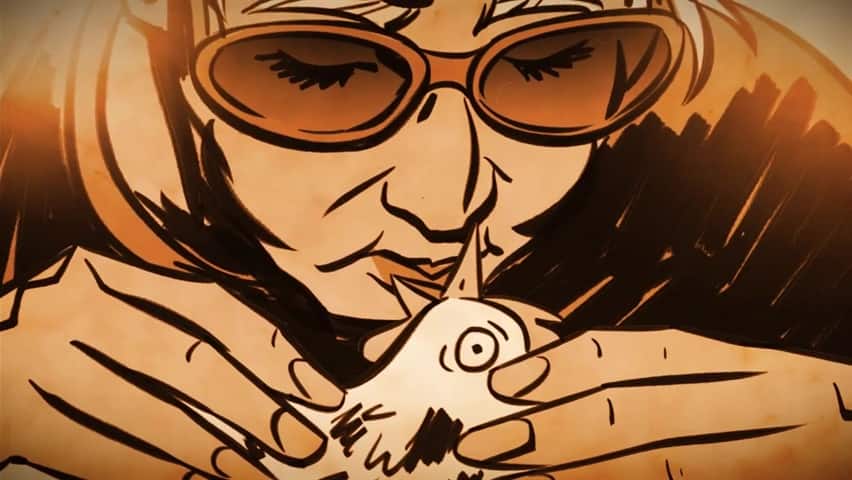 2 years ago
3:03
Jackie Calhoun of Arkansas tells guest host Dianne Buckner about valiant efforts to save Boo Boo the chicken by him, his sister Marian Morris and his wife Becky Calhoun. (Ben Shannon/CBC Radio) 3:03

When Jackie Calhoun came home to find Boo Boo the chicken floating face down in pond, he vowed to save his feathered friend.

"I picked that chicken up and I said, 'In the name of Jesus, you're gonna live!'" the Arkansas man told guest host Dianne Buckner on Jan. 29, 2007.

"I opened its little beak and I blew in its mouth and its eyes popped open," she said with a chuckle.

The next morning, Calhoun's wife Becky was watching over the bird as it lay barely conscious in a cardboard box.

"I was sitting out there on the front porch and I was reading about Lazarus being raised from the dead," she said. "About that time, that thing squawked and jumped up out of the box."

The family then renamed the chicken "Lazarette."

One of the most popular interviews of As It Happens host Barbara Frum's career went off the rails initially — to the point where she wondered if it would air. It did and has been a favourite of listeners ever since.

A British farmer who grew what he believed to be the world's largest cabbage turned out to be hard of hearing and possibly a little tipsy, having just returned from the local pub.

After several failed attempts to get a clear answer out of the man, an exasperated Frum exclaims through barely contained laughter: "What did you feed the goddamn cabbage?"

The man who plays Mozart — on his teeth

And he played them all on this teeth.

Shuttleworth said he taps the notes out on his two front teeth using his thumbnail while changing the shape of its mouth to alter the tune.

Asked how he came about this unique talent, he said: "I just thought everyone could do it."

Over the past few months, As It Happens has been visiting our vast and frequently weird archives, to find stories that can provide some distraction from the pandemic. Here is one of those stories:

Colorado farmer L.A. Olsen planned to eat Mike the chicken for dinner one evening in 1945. Instead, he spent the next year feeding the fowl through its severed neck with an eye-dropper.

When Olsen lopped off Mike's head, he missed the carotid artery, allowing the chicken to survive another 18 months, until he finally choked to death on a kernel of corn, according to Sally Edginton, who organizes an annual festival in Mike's honour.

"Is any of this true?" she asked Edginton during a January 2000 interview.

"Mike is true," Edginton assured. "He really is true."

The pig with a French accent

Welsh farmer Mike Rees claims he was feeding his animals one evening when his pig, Mouse, first said "hello" to him in a French accent.

To prove it, Rees played her a local news clip of Mouse's famous French greeting.

Finlay laughed and asked if any of his horses can talk.

The farmer quipped back: "Naaaaaay, of course they don't."

'Can you describe your ass for us, please?'

When Dallas attorney Gregory Shamoun brought his donkey Buddy to court in April 2007 to defend himself against donkey-related noise complaints, host Carol Off couldn't resist having a little fun.

"Can you describe your ass for us, please?" she asked.

"My ass is kind of furry," he replied. "And very well groomed."

"So did the jury get a pretty good look at it?" Off asked.

"I gave them the opportunity to pat my ass or talk to my ass and, then after they observed, then my ass went back home," he said.

The penis museum's quest for a human donor

When Sigurdur Hjartarson's spoke to Off in August 2007 about his quest to find a human penis for his Icelandic Phallological Museum, he already had three prospective donors lined up.

A 92-year-old "famous womanizer" from Iceland, a British TV personality and a German photographer all promised to donate their members posthumously.

But one American man said he would have his penis removed before he died and shipped to Hjartarson. To sweeten the deal, he promised to have it tattooed with the U.S. flag.

"I would appreciate that," Hjartarson said.

That interview inspired a 2014 documentary about the donors called The Final Member, which actually shows the American getting his stars and stripes.

But it looks like the old man beat the American to the punch.

As of 2018, Hjartarson's collection included the full twig and berries from the aforementioned 95-year-old Icelandic "gentlemen."

As It Happens had to get permission from CBC's top brass to protect the true identity of Lord Buckethead, a self-described "intergalactic spacelord" who travelled to Earth "from hyperspace, via the London borough of Finchley," to run against Theresa May in the 2017 U.K. election.

Buckethead, whose name and appearance are inspired by the 1984 Star Wars parody Hyperspace, also ran in '87 against Margaret Thatcher and '92 against John Major.

"Over these decades that you have been running, has it always been the same you? Or are you like Doctor Who? Do you regenerate for each election?" Off asked him on June 12, 2017.

On the 50th anniversary of the famous video clip that purports to show Bigfoot wandering through the wilderness in Bluff Creek, Calif., As It Happens reached out to Bob Gimlin, one of the two men behind the iconic footage.

"And why do you think it was female?" Off asked.

"They thrust their genital area on to the back of the male deer," Jean-Baptiste Leca, an assistant professor in the department of psychology, told Off in December 2017.

Leca theorized the young female monkeys — aroused, but not yet ready to mate with their aggressive adult male counterparts — were using the deer to practice "safe sex."

As far as Leca can tell, the deer are into it too. Or at least they don't appear to mind.

"They have a monkey on their back and they seem to like it," he said.

With files from Mitchell Thompson and Alison Broverman