How Trump's Jerusalem move takes U.S. 'out of the game' in Middle East peace talks

Former U.S. ambassador to Israel Daniel Kurtzer​ says Trump just killed any chance of a peace deal between Israel and the Palestinians by recognizing Jerusalem as the nation's capital.

In making the announcement, Trump called the decision "very fresh thinking" and vowed to begin the process of moving the U.S. Embassy from Tel Aviv to Jerusalem.

Jerusalem's status is one of the most emotionally charged matters separating Israelis and Palestinians. Both sides stake claims. Israel captured east Jerusalem — claimed by Palestinians for the capital of a future independent state — from Jordan in 1967 and annexed it, in a move not internationally recognized.

By taking a side, Trump has undermined his son-in-law Jared Kushner's efforts to negotiate peace in the region, says Kurtzer, the former U.S. ambassador to Israel under president George W. Bush.

Here is part of his discussion with As It Happens guest host Jim Brown.

No, it's actually the equivalent of an own goal. The peace process has been moribund. It wasn't going anywhere when Trump took office.

He raised expectations by saying the United States was going to make "the ultimate deal." And now he has basically taken the United States out of the game by siding with the Israeli government, offering nothing to the Palestinians on the single most sensitive and complex issue in the peace process. Mr. Trump can no longer claim the role as an honest broker. 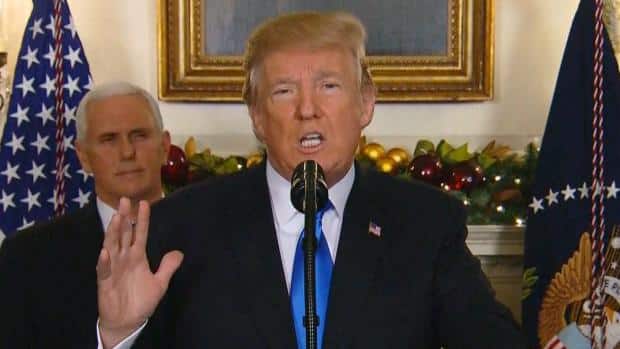 What do you make of the language that he used today in that speech?

This was a speech devoted entirely to two constituencies only — his so-called domestic base, including some significant donors. And Prime Minister Benjamin Netanyahu.

There's been a lot of pushback from U.S. allies in the Muslim world today. Even the Pope is opposed to what the president was suggesting today. Why do you think he went ahead with it?

I think he's one of these people who pushes back when people tell him not to do things. And this is a case where a lot of people told him not to do it. And he then listened to a select group of advisers who said to him, "To hell with it, let's just do what we want to do."

The reality is we all do business in Jerusalem. When I was ambassador for four years, all of my meetings with government officials were up in Jerusalem and we travelled there almost every day. So it's a fiction to believe that we are somehow trying to wrest Jerusalem from Israel's hands.

But given the nature of the issue and the fact that Israel itself agreed that it was a subject for negotiations, why would ... the so-called honest broker wade into this in the way the president did? I just don't get it.

This is not a new promise from U.S. presidents seeking election, and even after they've been elected. Bill Clinton promised to move the embassy to Jerusalem. The president you served, George W. Bush, made the same promise. But it's never been delivered on.

Each candidate has done what he and she have thought necessary to win an election and then when they get behind a desk in the Oval Office, they've taken different decisions.

Why has it been so difficult to turn this promise into policy?

Presidents have realized that you don't fulfil the promise to one side in a situation where you're trying to mediate between two sides.

Does today's announcement prejudice those peace talks in any way?

As much as the president may want to believe he's done something useful and positive, he's actually shot himself and his chief negotiator and son-in-law [Jared Kushner] right in the foot and they're not going to be able to proceed in any manner during the course of this administration.

I think the U.S. role has been essentially sidelined and the question is whether or not someone else can fill that vacuum. So far, there haven't been many candidates for that.

As this is unfolding, the U.S. ambassador to Israel was quite a controversial pick — David Friedman, a former bankruptcy lawyer who's been very supportive of the settlement movement in Israel. How concerning is that for you given what the president was talking about today?

I took the really quite unprecedented step when Mr. Friedman was nominated to write an op-ed against the appointment for exactly these reasons. His activities during his pre-ambassadorial days were absolutely contrary to American policy, not only supporting settlements, but actively funding them.

And he has made a number of statements since entering office that have been equally problematic, using the phrase ...  "the alleged occupation."

The whole tone and tenor of this administration has been very much anti-peace process.

This interview transcript has been edited for length and clarity. For more on this story, listen to our full interview with Daniel Kurtzer.