When CFL legend Tony Gabriel was asked to replicate his famous 1976 Grey Cup-winning play for a promotional video, he ended up rupturing his Achilles tendon.

Former Ottawa Rough Riders receiver Tony Gabriel ended up with a torn Achilles tendon and a bruised ego when he tried to recreate his famous 1976 Grey Cup-winning catch for a promotional video.

"We're calling this 'The Catch 2.0' and there isn't going to be another one past that," the 68-year-old retired footballer told As It Happens guest host Helen Mann.

The original catch original was the stuff of legends —  a touchdown grab in the waning moments of the 1976 Grey Cup that gave Ottawa an unexpected last-second victory against Saskatchewan. 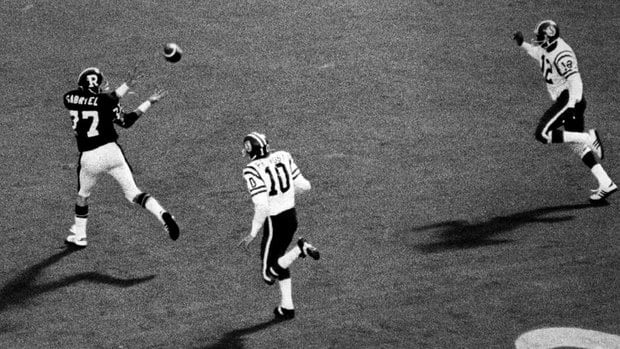 To this day, it is widely considered one of the most famous plays in league history.

So when a national brand asked Gabriel to re-enact it, he eagerly accepted the offer.

"I was tickled to be asked, you know, and be sort of part of this folklore for great Ottawa fans," he said.

The script has Gabriel walking the streets of Ottawa when a superfan recognizes him in the streets and asks for an autograph. The pair then recreate the 1976 play in the city's bustling Byward Market.

"So we were doing a number of takes of me catching the pass, and everything was OK for the fourth or fifth take," Gabriel said. "And I caught most of them, by the way."

They were about to call it a day, but the actor he was working with had apparently missed his mark. So someone asked: "Mr. Gabriel, can you do it one more time?"

"The sixth time was too much, and it took me," he said.

"When I tried to push off from the pretend line of scrimmage, I went down in a heap. I couldn't put any weight on my right leg. I felt very scared because I couldn't feel my toes, even," Gabriel said.

"Quite frankly, I was somewhat embarrassed because people were all, you know, walking by, stopping, and someone had noticed me and recognized me."

Gabriel was rushed to hospital, where he was diagnosed with a ruptured Achilles tendon. He'll be in a cast for the next three months.

3 mos in casts. That's what I get for pretending I still am young enough to run a football pattern. Achilles rupture. <a href="https://t.co/AUhKjAov1a">pic.twitter.com/AUhKjAov1a</a>

"My dear wife is spoiling me now, with having to prepare meals and do the dishes," he said with a chuckle.

He said he's baffled that in four years of college football, 11 years of professional football and 24 years of senior men's basketball, he had never seriously injured himself until now.

"This has done me in, trying to do this promotional video," he said.

Still, he hopes that once his ankle and his ego have recovered, it'll all just be a funny memory.

"I think it's going to be a real pleasure looking back at it one day and laughing at my success — or a lack of it — in trying to duplicate the catch."