John O'Connor says he was just doing his job when he rescued a man from an oncoming train at a California transit station.

'We're here to get our passengers where they want to go safely,' says John O'Connor As It Happens6:23Watch this California transit worker save a man from an oncoming train

John O'Connor says he was just doing his job when he rescued a man from an oncoming train at a California transit station.

The footage shows O'Connor yanking the man up by his shoulders and hoodie back onto the platform, just seconds before the train whizzes by.

"We're here to get our passengers where they want to go safely and on time if we can help it," O'Connor told As It Happens host Carol Off. "If you cash the check, do the job."

Watch video of the dramatic rescue: 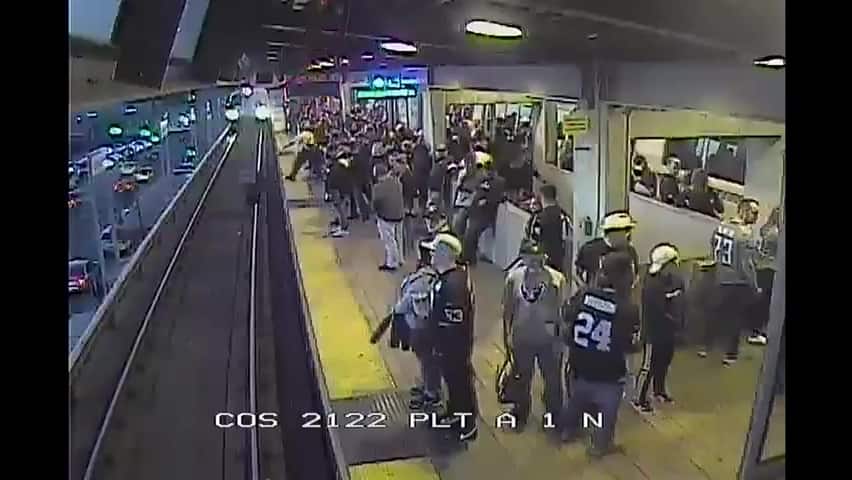 O'Connor, a 24-year veteran of BART, said he was helping with crowd control at the station following an Oakland Raiders football game when a man tripped over the edge of the platform onto the tracks just as a train was approaching.

"Everything kind of just slowed down. I saw him. I saw the headlights on the train and … I didn't want to see him die," O'Connor said. "I didn't have time to think. I just grabbed him."

BART officials said the man who fell was intoxicated and was taken to a hospital to be checked. He has not been publicly identified.

In the moments after the rescue, when his adrenaline was still pumping, O'Connor admits he was angry with the stranger. But after a few seconds, he calmed down.

"I knew he had just come from the Coliseum and was having a good time," he said. "So I helped him up and I just gave him a hug."

An emotional video of he pair holding each other was posted to social media.

BART has hailed O'Connor as a hero, as did many witnesses.

"Everybody's patting me on my back, clapping and just cheering and telling me, 'A good job,'" O'Connor said.

"As I'm coming to work today, I have people stop me in the street and want to shake my hand and tell me, 'Thank you.' So it's very flattering, you know."

O'Connor says hasn't heard from the man he rescued. He says his last words to the man were: "Hey man, have a good day and pay it forward."

Written by Sheena Goodyear with files from Sarah Jackson and The Associated Press. Interview produced by Abby Plener.