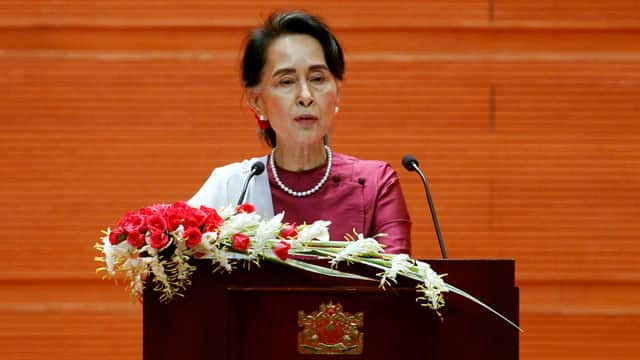 3 years ago
2:12
'We condemn all human rights violations and unlawful values. We are committed to the restoration, peace, stability and rule of law throughout the state,' says Myanmar leader 2:12

Suu Kyi, a Nobel Peace Prize laureate, spoke publicly for the first time Tuesday about the so-called "clearance operations" that have forced some 421,000 Rohingya Muslims to flee their homes in Rakhine state and seek refuge in neighbouring Bangladesh.

With the mass exodus sparking accusations of ethnic cleansing from the United Nations and others, Suu Kyi said her country does not fear international scrutiny and invited diplomats to Myanmar, also known as Burma, to see some areas for themselves.

The international community has been asking for weeks for [Aung San Suu Kyi] to speak out. What do you think of what you heard?

Unfortunately, it's real disappointment. Aung San Suu Kyi seems to find it mysterious that more than 400,000 Rohingya Muslims actually fled Burma [since Aug. 25]. But there's really no mystery. We've been tracking this all along and what we've found is the Burma military has engaged in a campaign of mass arson, killing, looting, essentially ethnic cleansing.

Instead of, as foreign minister, inviting in the fact-finding mission that was established by the UN Human Rights Council in March to investigate human rights violations, she's offering a propaganda tour.

We heard her say there have been no conflicts or "clearance operations" since the 5th of September. What is the evidence that you've seen that contradicts that?

We have seen significant burning of Rohingya villages since the 5th of September, including a significant number over the past week.

Human Rights Watch has now got satellite footage of over 214 villages that were burned and many of those, as I mentioned, have been burned very recently. And significant parts of the northern Rakhine state are still on fire.

She says in that speech she wanted to find out why the exodus is happening. Is there any doubt that she does know what's going on? Is there any way she could not be aware of the facts on the ground?

What's weird is she has basically said that she wants to have evidence presented, but when it comes to her making allegations, for instance, against NGOs or UN agencies who have been providing food and other assistance to Rohingya, she was issuing statements saying that there was a suspicion that the local staff of those agencies were involved in supporting the insurgency, which has now made it much more difficult for humanitarians to basically operate anywhere in Rakhine state.

This is why we have been calling now for targeted sanctions against the Burmese military and their commanders, looking also at the various industrial conglomerates that are controlled by the military of Burma and, really, a global arms embargo to cut off Burma's military from its suppliers in the international military community.

With files from Associated Press. This interview has been edited for length and clarity.