Man reunited with his letter to Santa 70 years later

A British man has discovered that the Christmas list he sent to Santa Claus in 1944 never made it to the North Pole. A construction crew recently found the note in the chimney at David Haylock’s former home. 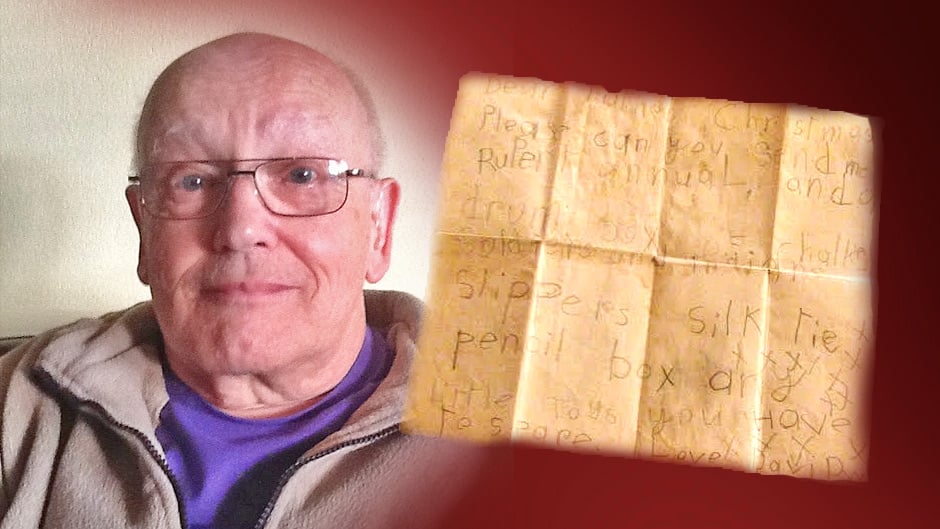 Video: Man reunited with his letter to Santa - 70 years later

As It Happens6:39Construction workers find Christmas letter in chimney that UK man wrote 70 years ago

A British man has been reunited with the Christmas letter he put in his chimney more than 70 years ago.

"I knew the Christmas post was somewhat slower," David Haylock, 78, tells As it Happens host Carol Off. "But, I thought that this was a bit over the top."

Construction workers discovered the letter while they were demolishing the chimney at Haylock's old home in Berkshire, England. Haylock says no one ever used the fireplace.

Haylock remembers putting the Christmas list in the chimney as a young boy.

"It's tradition. You always put your letter to Father Christmas [in the chimney] to be drawn up."

I was an only child and fairly spoiled.- David Haylock

Haylock guesses that he wrote the letter before Christmas in 1944. He would have been seven years old at the time.

The list was written on the back of a letter from Haylock's uncle who was serving in the army at the time. In the letter, his uncle wrote about how he wished the war would end soon.

That year, Haylock asked for toy soldiers, a drum, chalk and a comic called a Rupert Annual.

He also asked for a silk tie and slippers, which he admits was rather "precocious" of him.

"My father probably had a silk tie and I fancied one as well."

Haylock remembers receiving the drum and the silk tie.

"I was an only child and fairly spoiled. My father was a woodworker. And anything on the list, he made for me."

The construction workers who recently found the list decided to buy Haylock all the presents on his list.

While Haylock opened one of the gifts for a television crew, he says he'll be waiting until Christmas day to open the rest.

"That was the only one I peeked in," he says. "Otherwise, I would have not."