Asheville Coun. Sheneika Smith says it's time to screen police for "the pathology of hatred" after an officer was caught on camera beating a black man.

A city councillor in the North Carolina city where a police officer was caught on camera beating a black man accused of jaywalking says it's time to screen police officers for "the pathology of hatred."

The FBI has opened a criminal investigation into Christopher Hickman, a white police officer in Asheville, N.C., shown on body camera footage shocking 33-year-old Johnnie Jermaine Rush with a stun gun and repeatedly punching him on Aug. 25, 2017. ​

Asheville Coun. Sheneika Smith, who knows Rush personally, spoke with As It Happens host Carol Off about how the violent footage has rattled her community.

What did you think when you first saw this video?

I was very disturbed by it because I'm new to council and I knew it would be the issue that we had to face head on. But most disturbing for me is I recognized the victim  —  Mr. Johnnie Rush.

I'd had some interactions with Mr. Rush through a non-profit organization called Green Opportunities.

So immediately I was struck on so many levels by the behaviour of our law enforcement and by the brutality one of our community members was facing.

I know this issue was going to really rattle our city. 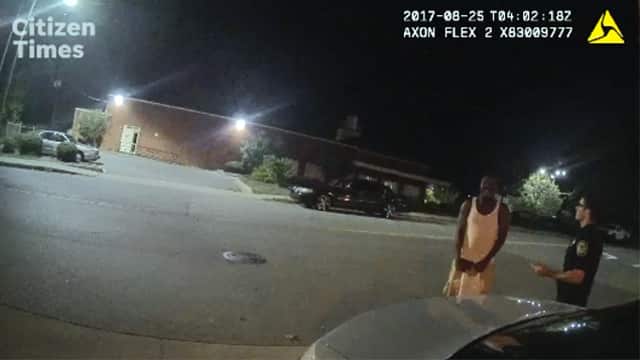 3 years agoVideo
1:26
This body camera footage obtained by the the Citizen-Times shows a white police officer beating a black pedestrian he accused of jaywalking in Asheville, N.C., in August 2017. Officer Christopher Hickman has been charged with assault by strangulation, assault inflicting serious injury and communicating threats 1:26

[Rush] wasn't someone who was in trouble. He wasn't known to police. He was working as a dishwasher and just heading home that night at midnight. Do you know anything else about him?

I think it's important that you pointed that out, because usually as a society there are justifications that would exempt individuals or would give us an excuse to say, "Oh, this was just a situation because he had a gun."

Mr. Rush was unblemished, which would gather more attention and give us even more reason to look at this police culture.

It's interesting though that this was a training session. The officer who did the beating was training the other fellow how to do the job. What does that tell you?

If we're really unpacking this issue, I think that is where we start.

How did he even qualify to be a training officer?

That's not a person that we would like to be represented on our force. Neither would we like this person to train new, brave, well-intentioned citizens who want to join this charge to protect and serve. That's where the problem begins.

This Officer Hickman resigned after the footage was made public. And the chief of police, Tammy Hooper ... she said she'd be happy to resign. Do you think the chief will resign?

I'm a city council member and I believe that all terminations from this point are subject to an investigation.

I would really hate to see Chief Hooper go — and not that she didn't act in negligence, because I believe that she should have started a criminal investigation of this affair when she first viewed the footage.

I would really like to see us work with Chief Hooper. But I think, again, her termination and whether she remains to continue the work, whether she's able to come and redeem herself, is subject to the larger investigation.

— With files from Associated Press. This interview has been edited for length and clarity.