Californians may one day flock to Canada as wildfires get worse, says former governor

Former California governor Jerry Brown says he knew his home state a would face a climate change reckoning, but he didn't think it would come this soon.

Jerry Brown stands by his climate change record, but admits he could have done better with forest management As It Happens7:36Californians may flock to Canada as wildfires keep getting worse, says former governor

Former California governor Jerry Brown says he knew his home state a would face a climate change reckoning, but he didn't think it would come this soon.

Dozens of fires have burned about 1.8 million hectares in California, Oregon and Washington state since August, killing at least 34 people, destroying entire towns, forcing thousands to flee their homes.

Brown was the Democratic governor of California between 1975 and 1983, and again from 2011 to 2019. He's now a private citizen living on his ranch north of Sacramento, Calif. He also serves as chair of the California-China Climate Institute.

Brown says seeing his state on fire has him looking back on what his government could have done differently to tackle the climate crisis. He also says his own family, and possibly many others, are setting their eyes on Canada as a possible refuge, as things get worse.

Mr. Brown, what have you seen and felt of the fires where you are north of Sacramento?

The fires came within about seven miles of my ranch where I am today out in the country. We've been living off the grid in an old stagecoach stop where my grandmother was born way back in 1878.

I can tell you the air, it's a little more smoky right now. It's been this way for almost a month. There are fires on all sides.

It makes it very difficult to function because to go out and breathe in this air, it has chemicals and it has a certain toxicity, which means you stay in most of the time.

And I can hear it in your voice. I mean, everyone we have interviewed in your state has had that scratchy sound. How is it affecting you physically?

I feel fine. My wife gets a little depressed by it because she's a runner, and you can't really run in this kind of weather.

So it's quite a vivid display of the power of nature and what we can expect in increasing doses over the next few decades.

And that's really the big takeaway. It's not just what's happening now, which is horrible enough, but that because of the continuing emission of billions and billions of tonnes throughout the world of CO2 and other greenhouse gases, it's going to get worse.

So all around, what has been predicted for 20 years is now coming home. The chickens are coming home to roost.

And I want to talk about responsibility for that, because, as you know, you presided over this state as a governor for two terms. This is a state, for those who visited there, will find that in your cities, you have a vast urban sprawl and freeways choked with commuters, big air-conditioned houses.... If you're talking about climate change being a major cause of this or fuel for this, how much responsibility do people in the state have to accept?

A hundred per cent. Not just the state. All over the planet.

I'm not even talking about the agricultural activities and the other glass factories and cement factories. The whole industrial process that creates our well-being has the dark side that is radically altering the climate.

And that's the way it is. And it's California, yes. And our lifestyle, yes. But it's also the failure of leaders of the world.

No. I did everything humanly possible. In fact, most people said I did too much. Now, was it enough? No, it's not enough. But I can tell you, as a guy who's been around the political world for 50 years, I pushed the politicians to the limit.

The fact is, the political class in America, with maybe a 20 per cent exception, does not want to make the hard decisions because they cost money and they require a price on carbon and they require regulations that constrain the way we're functioning today.

You know that [U.S.] President [Donald] Trump insists these fires are created or fuelled by bad forest management. In your own state, does he have a point?

Yes, he has a very good point. But I will have to say it's his responsibility in the first instance, because the federal government owns over ... 60 per cent of the forest in California.

But yes, as governor, that's something we didn't do enough.

So, yeah, there's a lot of culpability to go around. 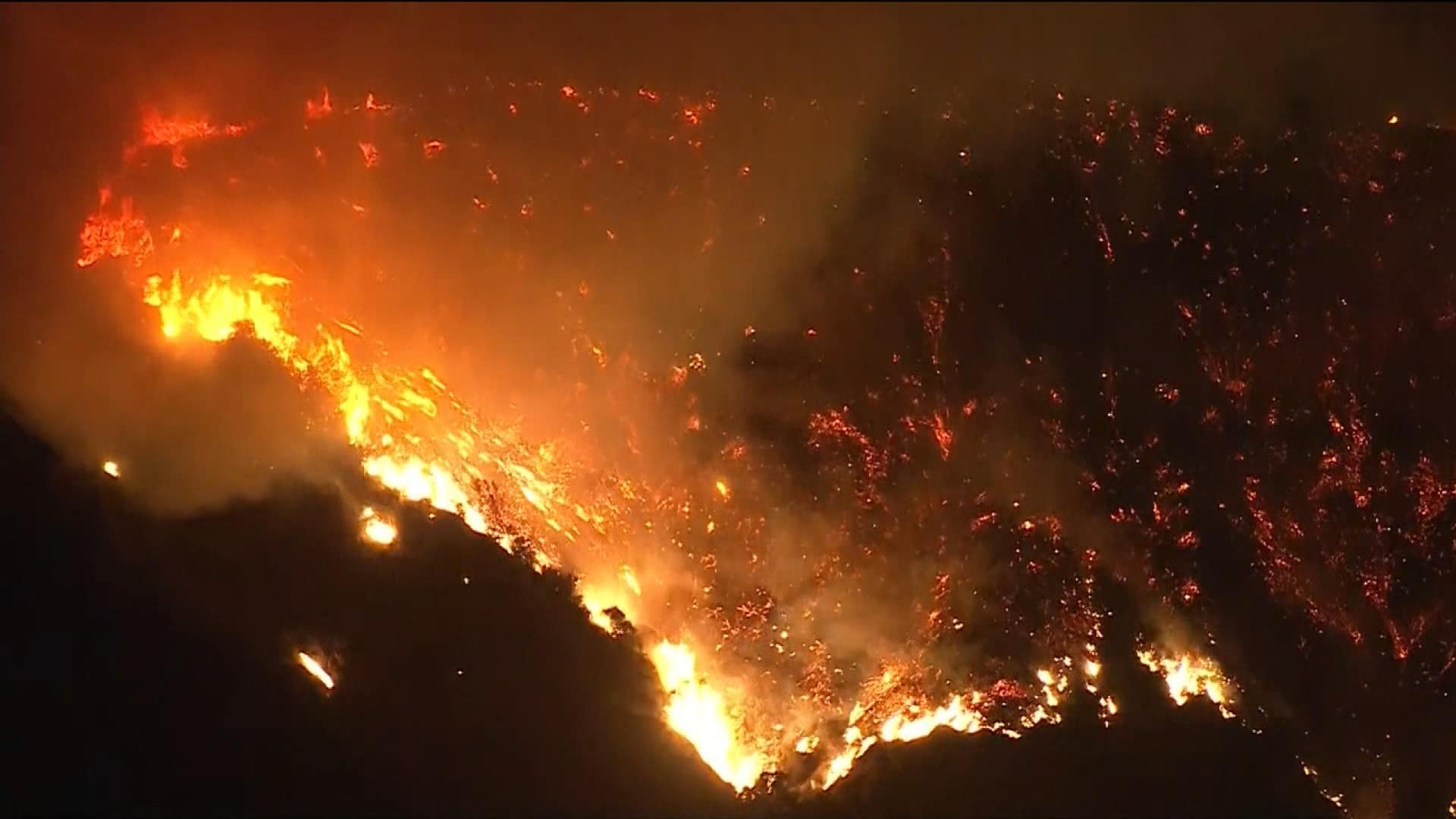 1 month ago
0:46
Flames tower over the tree canopy as California wildfires inch their way toward the historic Mount Wilson Observatory. 0:46

There's a lot of support also for Donald Trump when he says what he believes, which is that climate change is not the cause of this.... So how do you turn this around if there is that level of climate change skepticism?

Well, that's a good question. We may not turn it around. Hopefully, the first sign of how we're doing is whether or not Trump is defeated.

The tragedy here is that the wealth that we enjoy as human beings has taken on an annual basis, 40 billion tonnes of CO2 and greenhouse gases, methane, chlorofluorocarbons, soot, things like that.

And we're increasing, not decreasing. So we need some radical change and it has to be everywhere — California, Canada, Russia, India, China. And that's going to take an awakening that hasn't yet occurred.

A lot of people in your state are talking about whether they should leave, whether this is the right place for them to live, because they're now understanding this is going to be possibly an annual event. What do you say to those who believe they should leave? Have you considered it?

Well, my wife reminds me that her grandmother was born in Canada and that we ought to be looking for some property because if this smoke doesn't clear, she certainly doesn't think it's livable. So I would say that's a real possibility.

Of course, Canada is not letting Americans in. So we'll have to solve that problem if you want to have a little migration from California, which you may not want.

And when might we see you and your wife immigrate to Canada?

I don't know. My wife, she is more bothered. She's a runner. And she does not like this barrier.

And by the way, from the climate projections, California and the West in America is going to burn. Canada is going to have a lot of nice spots. It's going to have the water. So, yeah, you better be on your guard because I think you've got millions of people that may be headed your way.

Well, you might tell them that we have had some devastating fires in recent years and that people in the cities of Canada and the West Coast are saying they can't breathe either because of the fires in the U.S. So there are not many places to run at this point.

Yeah, and we California had a very good arrangement with Ontario on our cap-and-trade program, which functions as a price on carbon. And then you got a new Trump-like minister, and that was the end of that program. So we're still partnering with Quebec, however.

But you think people will still be coming to Canada?

Oh yeah, well, look, life is migration. The people who came to North America 14, 15,000 years ago across that ice bridge, they were on the move. And human beings never stop.

Written by Sheena Goodyear ith files from Reuters. Interview produced by Chris Harbord. Q&A has been edited for length and clarity.