A Canadian diver who co-discovered one of the oldest known ochre mines in the Americas in an underwater cave says he and his expedition partner knew immediately that they'd stumbled upon something incredible.

Findings reveal early humans mined for ochre in the Americas at least 10,000 years ago As It Happens6:03How a Canadian diver discovered underwater evidence of ancient mining

A Canadian diver who co-discovered one of the Americas' oldest known ochre mines in an underwater cave says he and his expedition partner knew immediately that they'd stumbled upon something incredible.

Fred Devos and his American-born diving partner, Sam Meacham, were exploring cave passages deep under Mexico's Yucatan Peninsula in 2017 when they realized the landscape had been unnaturally altered.

The site was once dry, but flooded about 8,000 years ago, preserving the area, according to a new study published Friday in the journal Science Advances.

Experts have previously discovered skeletons of some of the earliest known Americans in underwater caves in Mexico's Quintana Roo province. The latest findings help shed light on human activity that took place there thousands of years before the establishment of the Maya civilization the region is famous for.

Devos spoke with As It Happens guest host Duncan McCue about the findings. Here is part of their conversation.

Mr. Devos, in that video of you and your diving partner, we can see you squeezing your bodies through this tiny crevice under water with all your diving gear on. What did you find on the other side of that small space that was so exciting?

One of the motivations for even going through this space was the fact that we saw some evidence that this restriction had been manipulated.

Before speleothems, stalactites and stalagmites were broken, we probably wouldn't have been able to fit through. But we noticed that these formations had been broken and that sort of tweaked our curiosity to go further and see what's on the other side.

What we found on the other side was nothing less than the first indisputable evidence of what people — prehistoric people — were doing in the caves. 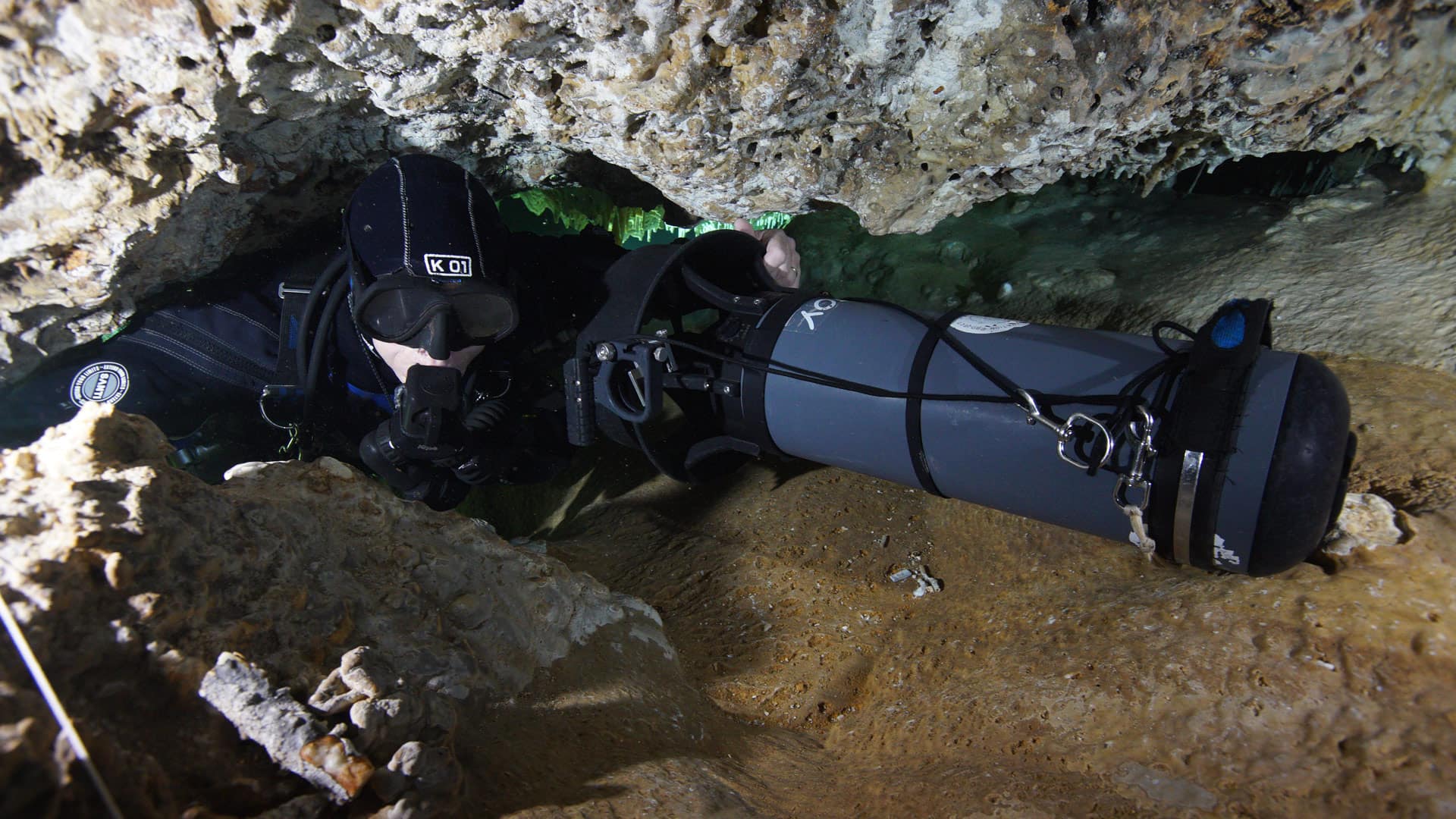 As you got through that crevice and saw what was on the other side, what was your reaction with your partner?

I've been doing this for 20 years. But this particular dive and that particular find of what we found on the other side of the restriction was a jaw-dropping moment for both of us.

We just looked at each other and had that look like, "Oh my gosh. Look what we've just discovered here."

We didn't have to wait for lab results to come back to realize that what we'd found was extremely significant.

Why was it so obvious to you that humans had been in the cave thousands and thousands of years ago?

We know that [the caves] weren't always flooded. And we know that humans had been in there before. But any … skeletal remains or any evidence of humans beyond near the entrance, we know that that happened at least 8,000 years ago because that's the last time the caves were dry. So without scuba equipment, no one would have gotten through the cave now that it's water-filled.

We automatically knew we're talking about prehistoric people. And later, the dates revealed that it was between [10,000] and 12,000 years [ago].

And I understand that the experts and archeologists have suggested that they were extracting ochre, that these were ochre mines. So what were they doing trying to get the ochre out?

[Ochre has] been used by humans since really the beginning of time, beginning of humans. And there's been different uses of it. Some have been ceremonial in nature. Other uses have been sort of as mosquito repellent or even medicinal purposes.

We're not really sure what their use of the ochre was, but it's clear that they had to go into the caves to get that quality of ochre. So it's nothing that they would find just on the surface.

And they must have really valued it because they spent a lot, a lot of energy removing tons of it.

One of the remarkable things watching the video of you and your partner is that the digging tools and the fire pits, these navigational markers, all this evidence, seems to be so well-preserved. Why didn't the water just wash it away?

If you look at other areas of the world where prehistoric archeology is done, it's almost always in caves because it's quite protected from the elements. But once you've filled a cave with water, it's even more protected.

You've got a very dark, low-oxygen environment, which preserves things very well. And we've been able to find skeletons in these caves and been able to even extract DNA from teeth of prehistoric humans.

You seem to have found evidence of mass mining thousands and thousands of years ago. What does that suggest to you?

The broad picture, the important part of this, is that it's really the first evidence of what the first peoples of the Americas were doing. We know that they had been going into these caves; we found skeletons in the past. And we hypothesized on why they were going in. But none of these guesses really were about ochre.

And because of the scope of it and the workload, we can say that they were organized. It wasn't one person going in once.

How many ochre mines have you found, and is there more searching and discovering to do?

I think this is just really the tip of the iceberg. And already, since we've sort of seen what an ochre mine looks like, we've already started noticing it in other cave systems nearby.

I'm confident in saying that this was a widespread, common activity. It wasn't a one-off. It's something that was important to the people of that era, and it lasted for a long time. We have evidence spanning 2,000 years of mining.

Written by Kirsten Fenn. Produced by Katie Geleff. Edited for length and clarity.