David Frum has 'no regrets' about controversial debate with Steve Bannon

David Frum stands by his choice to debate Steve Bannon at an event that sparked a protest, saw a dozen people arrested and did nothing to sway the opinions of those in attendance.

David Frum stands by his choice to debate Steve Bannon at an event that sparked a protest, saw a dozen people arrested and did nothing to sway the opinions of those in attendance.

"I have no regrets. I'm delighted to have done it," Frum told As It Happens host Carol Off.

"I said what I wanted to say and I think it had the main effect that I wanted to have, which is to give people on the eve of the American midterm, give those who see what's happening encouragement and hope."

Frum, a senior editor at The Atlantic magazine, debated Bannon, the former executive chairman of right-wing website Breitbart News, about the role of populism in politics as part of the Munk Debates in Toronto on Friday.

The event sparked a protest outside the Roy Thomson Hall venue, largely centred around opposition to the inclusion of Bannon, who helped Donald Trump win the 2016 U.S. presidential election and served as White House chief strategist for eight months until August 2017.

'A historical personage, for good or for ill'

But even before the debate started, it was a point of contention in Canada, with activists, community organizations and NDP lawmakers calling for it to be cancelled.

Bannon's critics pointed to his reign at Breitbart, during which the website rose to prominence by publishing articles laden with conspiracy theories, racism, antisemitism, anti-Islam rhetoric, anti-feminist sentiment, homophobia and transphobia. 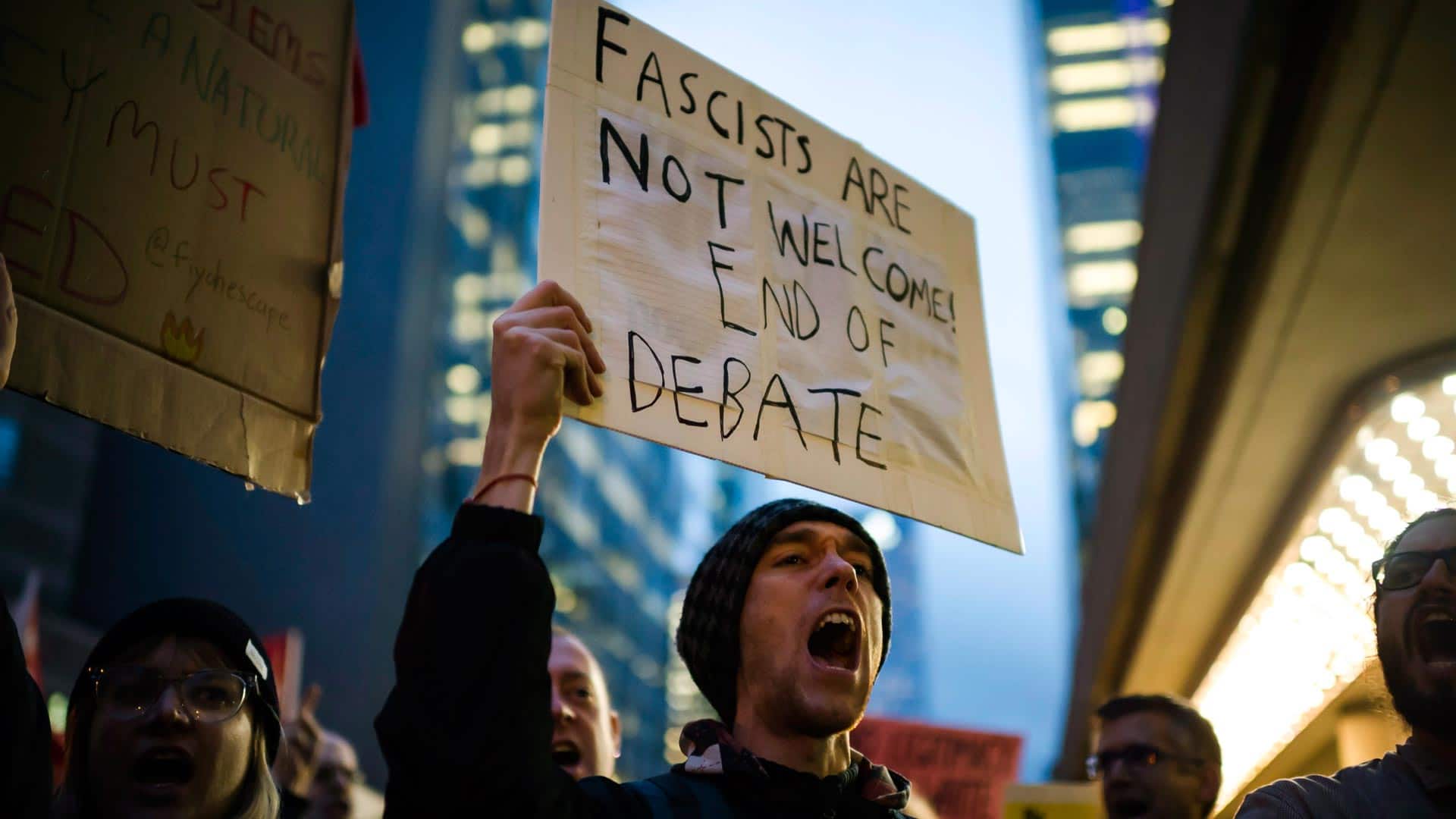 2 years agoVideo
4:25
There were "a number of arrests" during a protest in Toronto over an appearance by Steve Bannon, one of the masterminds of U.S. President Donald Trump's election. Bannon was in town to face off against David Frum, debating the role of populism in Western politics. 4:25

"I took the question, 'Should you do it?' quite seriously," Frum said.

"I didn't need any member of Parliament to make me think about this question. I thought about it on my own back in September when we began discussing whether it should be done."

Ultimately, he said he decided that Bannon is not a person who can be ignored simply by refusing him a platform at the Munk Debates.

"By not having Steve Bannon, you're not going to make him one bit less important than he is. He's an important person. He's a historical personage, for good or for ill. And he's going to go on being that for a while to come," Frum said.

"You don't debate resolved 'husbands should beat their wives', or 'of all the races, the white race is best.' But when you have sort of central questions of your time, even if they're kind of dark, I think it's important to take them on. Not because you're going to change the mind of the person you're with, but to inspire those you're arguing in front of."

The audience, however, doesn't appear to have been swayed by either Frum or Bannon.

At the start of the debate, 28 per cent said they agreed with Bannon that "surging populist agenda in Western nations signal a permanent shift in our politics," while 72 per cent agreed with Frum that it's a "passing phenomenon that will remain at the fringes of society and political power."

At the end, those numbers were unchanged. 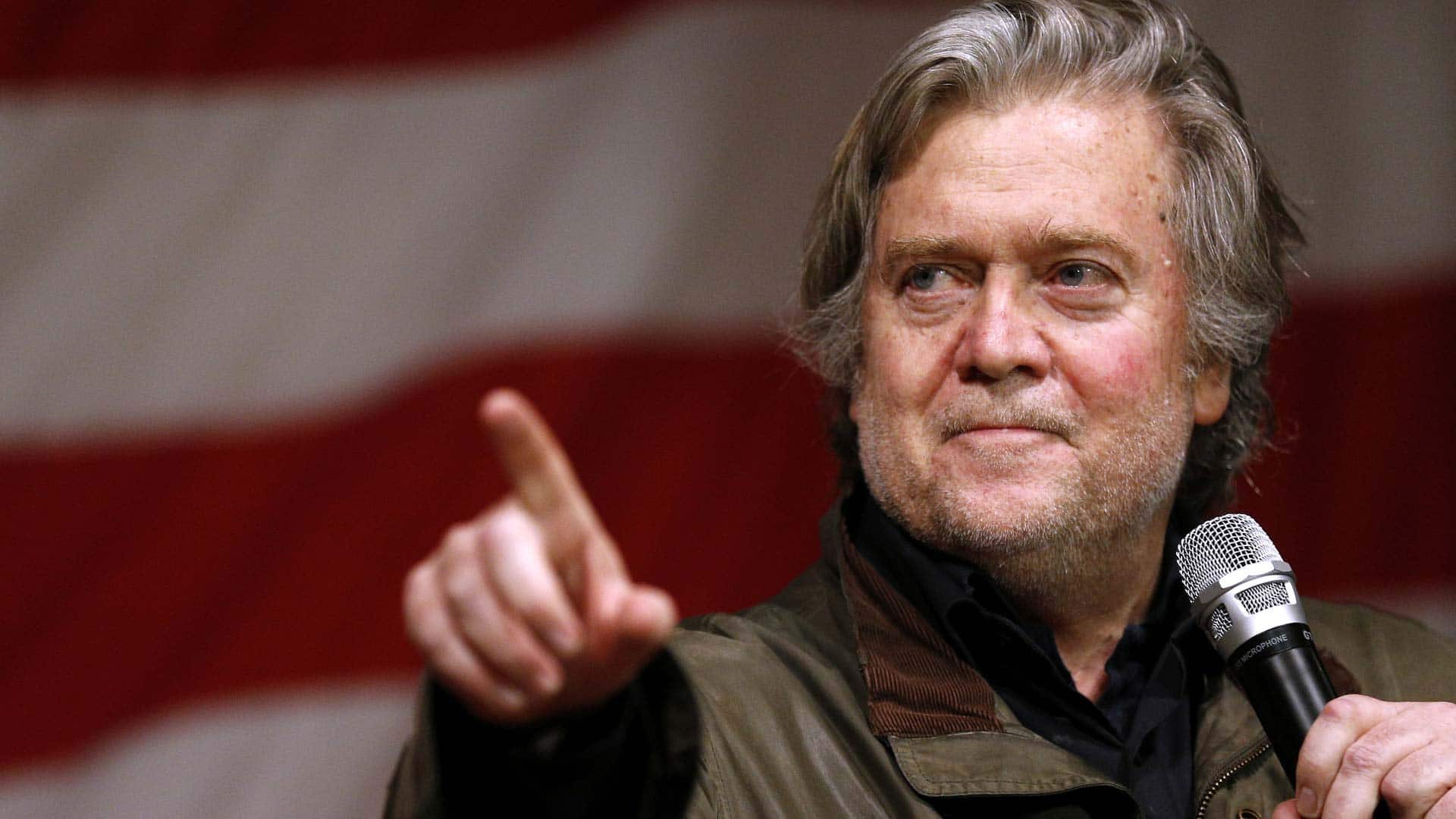 2 years agoVideo
18:12
Steve Bannon is coming to Toronto for a Munk Debate this week, but critics are calling to cancel the event. A panel debates whether Bannon should have the right to speak. 18:12

However, it was initially reported at the debate that Bannon overwhelmingly won over the crowd.

Munk Debates chair Rudyard Griffiths says the mix-up happened when they accidentally displayed the answer to different pre-debate question — was the audience open to changing their minds?

That glitch, says Frum, has marred the event.

"The way the evening ended, it leaves me with a concern, because it's an example of how fake news in the real sense of the term is created," he said.

"This false data point was created and you cannot call it back."

But Bannon wasn't the sole target of the protests. ​Frum, too, is a controversial figure.

As a former speechwriter for ex-U.S. president George W. Bush, he helped coin some of the key language used to justify the U.S. invasion of Iraq and the war on terror.

He says he has no regrets about that either.

"And when you evaluate me, you have to evaluate my story in full."

Written by Sheena Goodyear with files from CBC News. Produced by Erin Noel and Kate Swoger.