John McCain has been valorized as a war hero who embodied the spirit of patriotism and duty — but Matt Taibbi says he represents a much darker set of American values.

John McCain has been valorized as a war hero and bipartisan maverick who embodied the spirit of patriotism, freedom and duty — but political journalist Matt Taibbi says he actually represents a much darker set of American values.

McCain, a Republican senator, U.S. presidential candidate and Vietnam prisoner of war, died last week from brain cancer at the age of 81. His memorial service on Saturday featured powerful tributes from his political friends and foes, alike.

Taibbi, who recently wrote about McCain's military hawkishness for Rolling Stone, spoke to As It Happens guest host Helen Mann on Monday. Here is part of their conversation.

Tell me your reaction last week when you saw all the tributes pouring in for John McCain.

I covered John McCain on the campaign trail and I didn't have anything against him, personally. ...  I even liked him a little bit.

But the coverage of his passing, I thought, was way over the top.

I lived in Russia for a very long time. In fact, I studied in the Soviet days, and some of my former colleagues from that time even said that they hadn't seen anything like this on Soviet TV.

This is a very popular senator. He was considered by many to be a war hero. Did you expect anything less?

There's a bit of a changing narrative about John McCain.

Up until very recently, I wouldn't say that he was terribly popular, especially with the kind of people who would identify themselves as mainstream Democrats.

Particularly because John McCain, up until recently, was credited with helping usher in the Trump era because of his choice of Sarah Palin [as his presidential running mate] in 2008.

Do you think he could have foreseen that by appointing Sarah Palin?

They didn't choose Sarah Palin because they particularly liked her politics or because they thought it was a good idea.

The campaign was desperate. They were way behind in the polls, and they felt they needed, you know, a quote-unquote Hail Mary. And they knew that there was this huge, enthusiastic reactionary streak within their own party that they were trying to capture.

McCain himself, he personally disliked that wing of the party, but he embraced it anyway in an attempt to get elected. And, yes, I think they did know what they were doing.

You talk about his support for U.S. military intervention in places like Iraq. Why is that so egregious to you?

Our invasion of Iraq is still the central foreign policy disaster of our time.

McCain, personally, was a product of the previous big foreign policy disaster in American history — Vietnam. He returned from that war and immediately supported president [Richard] Nixon's illegal bombing of Cambodia.

He really, with very rare exceptions, never looked at a foreign policy problem where he didn't view the solution as invasion or intervention or bombing.

He was the first person in Congress to propose invading Iraq, and that's very, very significant.

Most mainstream politicians at the time ultimately ended up supporting the invasion, regardless of party. Why is his support so significant in your mind?

It's significant because he was really the first person to go there on the congressional side. ... And he was one of the last people to see that the war had been a mistake.

Does the fact that he was willing to stand up against torture at a time that so many Republicans weren't indicate that, perhaps, he had evolved from his more militaristic tendencies?

I actually was in Congress in 2005 and 2006 during the debate on torture ... and I remember actually being impressed by John McCain's speeches on the subject and his seeming steadfast insistence that there should be no allowance of torture anywhere.

But it turned out years later that his actual record on the subject was a little bit mixed, as in the Senate, he brokered a compromise that allowed a carve-out for enhanced interrogation techniques by the CIA. 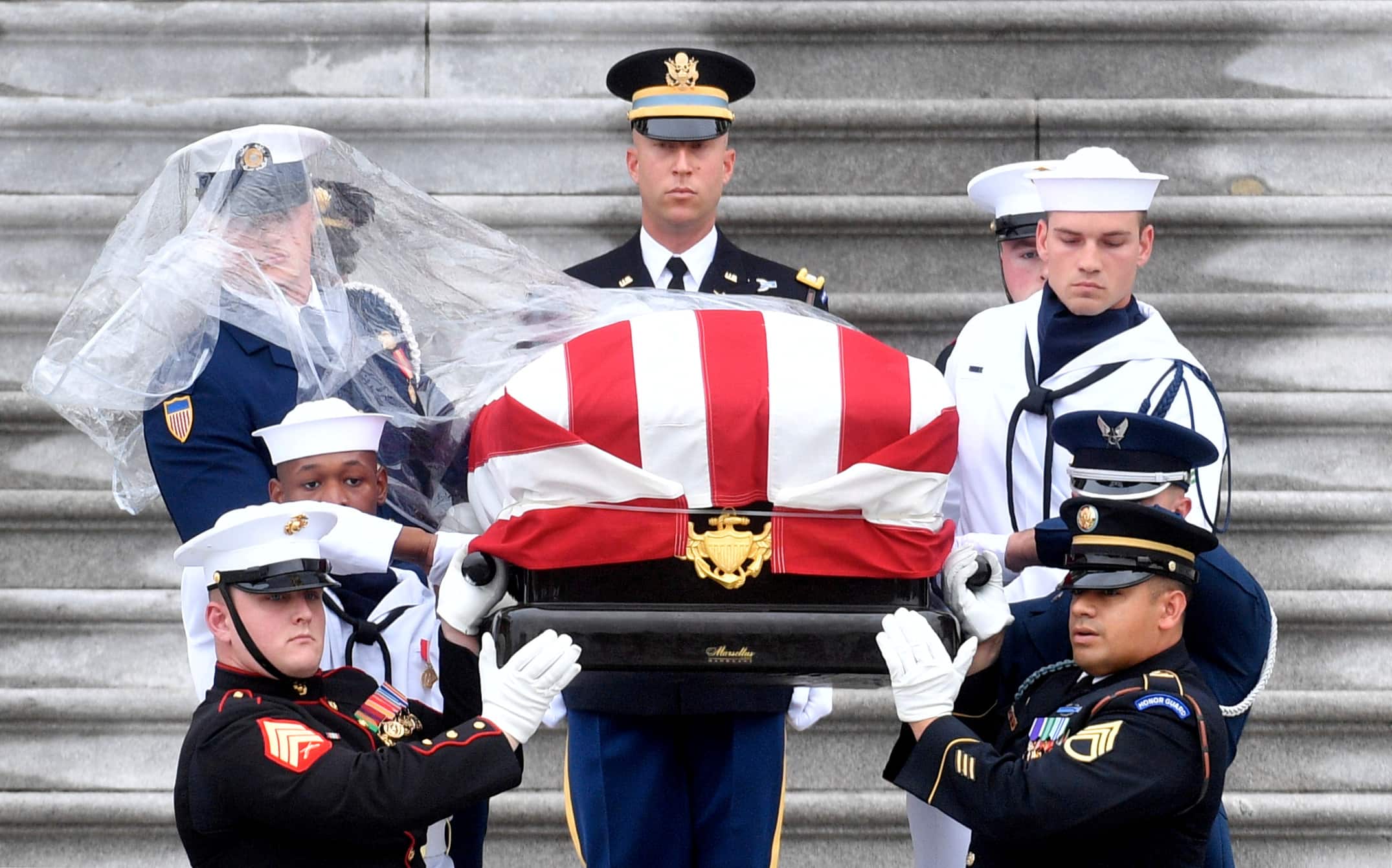 2 years agoVideo
8:38
Three former Presidents - Obama, Bush and Clinton - were at the service for John McCain. But not the current one. Donald Trump wasn't wanted there. And several people at the service took thinly veiled swipes at Trump. We delve more into that with political analyst and consultant Rina Shah. 8:38

How much do you think the praise we saw, the accolades delivered in McCain's death, are about more than him? About a desire to stick with the idea of American exceptionalism?

I was covering the Trump campaign as well, and there was the universal consensus of everybody who was covering Trump that his remarks about McCain — that he likes people who weren't captured — would not be a survivable series of remarks by an American politician, because you can insult anybody in America except veterans.

But Trump survived it and McCain became a symbol.

I think a lot of the outpouring of support for McCain that we've seen this week has a lot to do with people in Washington trying to show their disapproval of the person in the White House.

In your mind, is there anything that shines from John McCain's legacy?

He did have some very excellent moments as a candidate.

The moment where he refused to go along with a woman who dismissed Barack Obama as an Arab, and he took a hit politically for doing it, but it was the right thing to do. There was an underlying decency about McCain.

Politically it was, for me, overwhelmed by his support for military action over the years.

Written by Sheena Goodyear. Produced by Chris Habord. Q&A has been edited for length and clarity.