Canadians Justin Kripps and Alexander Kopacz tied with Germany for the Olympic gold in two-man bobsleigh at Pyeongchang, something that happened to Dave MacEachern back in 1998.

Dave MacEachern was at home on Prince Edward Island on Monday morning when the Canadian team tied for Olympic gold in the two-man bobsled. But it felt almost like he was on the course himself.

That's because 20 years ago, MacEachern and his pilot, Edmonton native Pierre Lueders, were the ones standing on that podium — after tying with the Italian bobsled team at the 1998 Olympics in Nagano, Japan.

"I went back into what my buddies used to call 'beast mode,'" MacEachern told As It Happens host Carol Off. "I was Dave the Bobsledder, but I was by myself in my living room and it was really special."

It is Canada's first gold in the men's event since that 1998 tie — and only the third tie in the sport's Olympic history.

For MacEachern, there was only one word to sum up how perfect it was to watch history repeat itself: magic.

"The similarities between 2018 and '98 are just uncanny," the former bobsled breaker said. 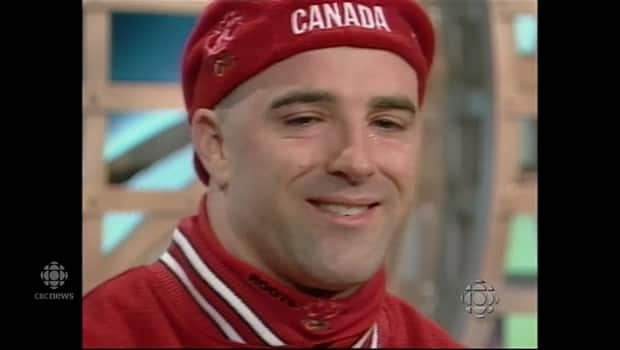 3 years agoVideo
2:13
Shortly after winning gold in Olympic bobsleigh in 1998, Dave "Eli" MacEachern sits in studio while his mother is interviewed. 2:13

CBC's Mark Connolly was the announcer for both games, a coincidence that was not lost on either men.

"Just hearing Mark Connolly's voice, the same guy that called our gold medal in 1998, it was quite haunting to be honest," MacEachern said.

Connolly tweeted his own disbelief, writing, "I can't believe I just called a tie for gold for Canada with Germany in bobsleigh 20 years after calling Canada's first gold medal in a tie with Italy."

It was also MacEachern's pilot, Lueders, who taught Kripps how to drive a bobsled. Leuders was at this Olympics as the South Korean team's coach, but MacEachern is sure he would be reminiscing and celebrating with the newly-minted Canadian gold medalists.

"To be there 20 years later, on the venue, it would just be tremendous," he said.

As for MacEachern, he didn't mind celebrating in Charlottetown. He has spent many Olympics as a commentator and he plans to bring his wife and sons to the Winter Games one day for the experience.

But for this milestone, home was where he wanted to be.