Steven Gibbons, a seismologist in Norway who studies nuclear explosions, explains why North Korea's latest nuclear test is a cause for concern.

When seismologist Steven Gibbons awoke early Sunday morning to the news that North Korea has conducted its sixth and most powerful nuclear test, he sent out a two-word tweet.

"I think this has been interpreted as a sort of philanthropic and idealistic tweet in being absolutely terrified for the future of the world, and that's largely correct," Gibbons, who studies nuclear explosions for Norway's monitoring agency NORSAR told As It Happens host Carol Off.

"But there was also a selfish element of 'my Sunday is now ruined' in it, and I don't know how many people have picked up on that point."

North Korea said in an announcement on state television that the test ordered by Leader Kim Jong-un was of an advanced hydrogen bomb for a long-range missile — also known as a thermonuclear device — and that it was a "perfect success."

"They have claimed that before, in January 2016," Gibbons said. "But the seismic data didn't really support it."

In that case, he said, the detonation was actually smaller than the regime's nuclear testing from previous years.

But this time, he said, the evidence suggests North Korea is doing more than the usual sabre rattling.

"The numbers were very, very different. This was a much, much, much bigger explosion," he said. "And we realized what they're saying about having a new type of weapon is very probably the truth."

Ground motion is a great indicator of an underground nuclear test, and sometimes the only one. North Korea has proven itself adept at masking other telltale signs, such as the leakage of radioactive materials.

The device that was detonated on Sunday is believed to have a much bigger yield than anything the North has demonstrated — an estimated 100 to 150 kilotons, according to Gibbons

That's far more than the bombs that destroyed Hiroshima (15 kilotons) and Nagasaki (around 20).

While this doesn't definitively prove it's a hydrogen bomb, Gibbons said: "We're talking about a horrifically destructive weapon here." 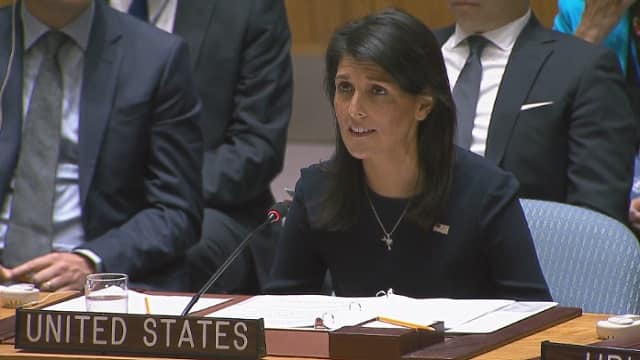 U.S. Ambassador to the UN says North Korean leader was 'begging for war'

3 years ago
1:44
During an emergency meeting of the UN Security Council, Nikki Haley said the United States does not want war but will defend itself 1:44

Whether North Korea can make a nuclear warhead small and light enough to put on top of a long-range missile that can reach the United States has long been a matter of heated debate among foreign experts.

However, there is no evidence as to whether the device pictured in the state propaganda is, indeed, the same device that was tested on Sunday.

"But the evidence is adding up that they have what they've been seeking," Gibbons said.

"The only question mark now is, are the warheads able to be put in the missiles? And if they can, then it's a dangerous situation."

With files from Reuters. For more, listen to our conversation with Steve Gibbons:

Correction: An earlier version of this story called Steve Gibbons a "Norwegian seismologist." While he resides in Norway, he is not, in fact, Norwegian.