Jen Ellis of Vermont didn't know when she gave a pair of homemade brown and white mittens to U.S. Sen. Bernie Sanders five years ago, they would eventually become one of the defining images of President Joe Biden's inauguration Wednesday.

Jen Ellis didn't know when she gave a pair of homemade brown and white mittens to U.S. Sen. Bernie Sanders five years ago, they would eventually become one of the defining images of President Joe Biden's inauguration Wednesday.

In the last day and a half, the Vermont woman has been inundated with requests from people looking to buy a pair of the mitts.

"I currently have 13,500 emails in my inbox, and I think that my inbox is now full and so I won't be able to respond to all those people," Ellis told As It Happens host Carol Off from Essex Junction, Vermont.

The mittens were thrown into the spotlight when Sanders was photographed at the inauguration ceremony sitting by himself in a chair with his arms and legs crossed. 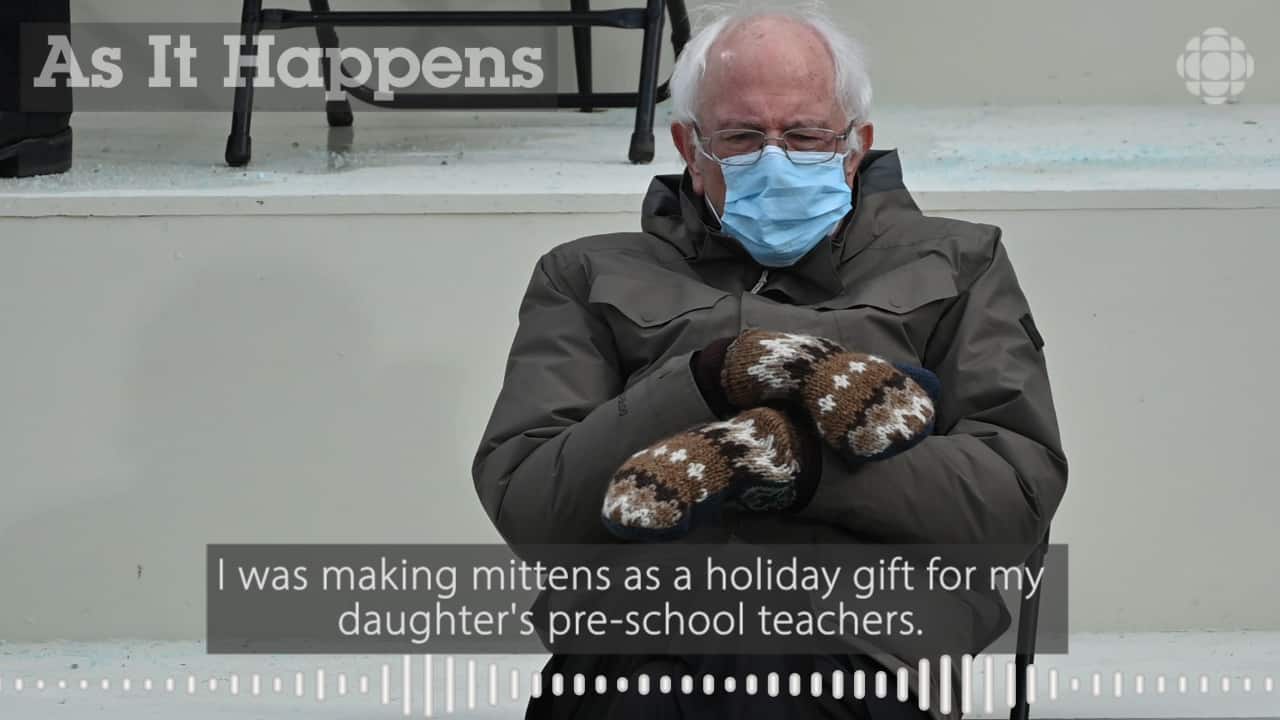 How Bernie Sanders got the mittens

He was wearing a mask, the mittens and the same coat from a December 2019 video in which he asked for donations to his presidential campaign.

"I am once again asking for your financial support," said Sanders in the video as he appealed to donors.

That imaged was turned into a meme that was so popular Time Magazine named it one of the most impactful memes of 2020.

Wait, is Bernie is wearing the same jacket from his meme at the inauguration? <a href="https://t.co/q0DtVNpZbB">pic.twitter.com/q0DtVNpZbB</a>

Now, it's the image of a seated Sanders wearing the eye-catching mitts that has taken over the internet, along with Ellis's inbox and voicemail.

"Today, people from like the Middle East and the Soviet Union or Russia, people have been calling me from all over the place, Australia. And so I guess I'm realizing that it has gone global," she said.

The mitts that launched a thousand memes

The image of Sanders on his chair has been used widely, inserted into historical photos, film stills and cartoons.

People seem particularly captivated by his presumed grumpy expression as he sits in the chair.

"As far as his demeanour goes, I think that he was just waiting patiently and probably trying not to get too close to anybody because of social distance rules," said Ellis.

"I know that people have said he looks kind of grumpy, but, you know … not everybody has like a resting pleasant face."

Ellis said she is aware of all the memes, and her personal favourite put Sanders in a scene from the movie Mean Girls.

"There's Bernie Sanders looking kind of grumpy, and I think that's hilarious, I just, I still laugh every time I see that," she said.

I'm sorry but Bernie would NOT sit at the Mean Girls table. <a href="https://t.co/U3yWiuGXMA">pic.twitter.com/U3yWiuGXMA</a>

How they made it to Bernie's hands

Ellis said she has never met the senator herself. Five years ago, she was making mittens for her daughter's pre-school teachers, the same school where Sanders' daughter-in-law, Liza Driscoll, was director.

Ellis was sad that Sanders had lost the nomination to become the 2016 Democratic presidential candidate, so she decided to make him a pair of mittens and gave them to Driscoll.

"I made an extra pair of mittens for him and I put a little note inside that said something like … 'You know, I still believe in you and I hope you run again,' " she said.

"Liza told me that he liked them and so that was the last I heard of it for ages," she said.

That changed when Sanders wore the mitts to a march in New Hampshire about a year ago.

"It made me really happy that he loaned them to someone he met along the campaign trail who had cold hands," said Ellis, so she made ten more pairs for his campaign to hand out to cold followers.

"I cut out the bad parts and I save the good parts and I sew them together with other sweaters that have, you know, nice colour combinations," she said.

Ellis said she has no intention of trying to make more mittens to sell, unless it's for a charity auction, because it would dilute the meaning of her gesture and take the joy out of it.

"It was a gift and it was given from the heart. And I don't expect anything in return," she said. "It was a unique, one-of-a kind thing, and it actually is priceless. You can't put a monetary value on that."