As it Happened: The Archive Edition - The Great Outdoors Episode

Our fearless host, Carol Off, is at home pushing for truth and certainty on air — but she's admittedly a fish out of water when it comes to pushing trapped cetaceans off a beach.

As It Happens: The Archive Edition airs each Friday of the summer at 7:30 PM — following As it Happens.

If you've ever wondered where our intrepid host Carol Off goes during the summer, be assured it is not The Bohemian Grove. She's more of a Baxter's Cove gal, heading east with her husband, Linden MacIntyre — to their cottage, in Judique on Cape Breton Island, NS.

And a couple of summers ago, Carol had her own face-to-fin encounter with nature on the beach there. As It Happens decided to check in.

Here's some of what she described to guest host Peter Armstrong.

Peter Armstrong: Carol, what happened this morning?
Carol Off: Well, quite early this morning, a neighbour called and said, "You gotta get down here. And bring your buckets. We got 16 whales beached." So Linden and I just got in the car and drove over  — and it was an incredible scene. Our little bay below us is all very sharp rocks, big boulders; and just this pileup of these — some people call them blackfish, or pilot whales. And it was just...it was shocking.

PA: There are all different sizes, I'm assuming — there's a sea of people down there trying to help already?

CO: By the time we got there, there were about two dozen. And that's about what we had as a team. We needed about ten more to save them all. And there was a local guy, Bill Danberger — he was the one who saw them come in and watched them last night in a bit of a feeding frenzy. They'd come in chasing a school of mackerel, and then during the night when the tide went out, they couldn't get out — they got trapped. So Bill started giving us instructions: "Keep them up, just get the dorsal fin up!" Wrestle that up, and then slowly try to time it. As there's a wave from the tide, just try and work them into the water.
CO: So these massive creatures — every now and then there's this big burst of steam and hot air, so you knew they were living —  we just inched them as best we could off the rocks. And then we started to manoeuvre them out into the water. It was like wrestling with an elephant. And I don't know nothin' about saving whales. So I just took the orders from Bill. And Linden MacIntyre — my husband — he was working on one of the big ones. And I was holding a big one out in the water, who was just thrashing and roiling around. And then they got the biggest one of the beach, and got it up. And suddenly there was this moment, when — some kind of communication between them — and he sent a message, and mine suddenly calmed down, and went upright. And they all started to move together. And there were some babies there too. And the babies started to move.  And suddenly we saw there was like ten — ten or 11 started joining together, just so close, shoulder to shoulder. We actually got trapped between them. They're sending messages back to shore, I guess — according to Bill — and realizing there's five dead, on the beach, and they're not sending a message back. So they left.
PA: And these enormous things thrashing around and you thrust yourself out in the water to try to help them. Did you feel safe as you were doing all this?
CO: You know, technically, I shouldn't have felt safe at all, because yeah, it's this huge thing. But they were never hostile to us. It was like they knew that we were helping them. One whack of the tail, and I would have been under the water and gone. But they needed us. They knew they needed us. I don't want to anthropomorphize, but I had this feeling that we were all working together on this one. But the really tragic part — after we had this feeling of victory, it's like when you're teaching a kid to ride a bike, and you let go, and they keep going and that feeling of joy — we were all feeling that, and then we had to go back to the beach where five had died. And then since then, there's now eight. One more came back a bit later, and then two more returned and died. To hear that they're coming back, you're thinking, "Why?" You know? But I guess they live and die communally. The irony is that —  for the past week — we have been out on the water in a boat, and we always take people out looking for whales. I didn't think that the first time I'd see whales this summer I'd be wrastling with them in the water.

PA: What an experience.

CO: Yeah, it sure was. Bittersweet.

PA: Well, we'll have to update your business cards with "whale rescuer" now.

PA: As you should. And nice to have you on the show! 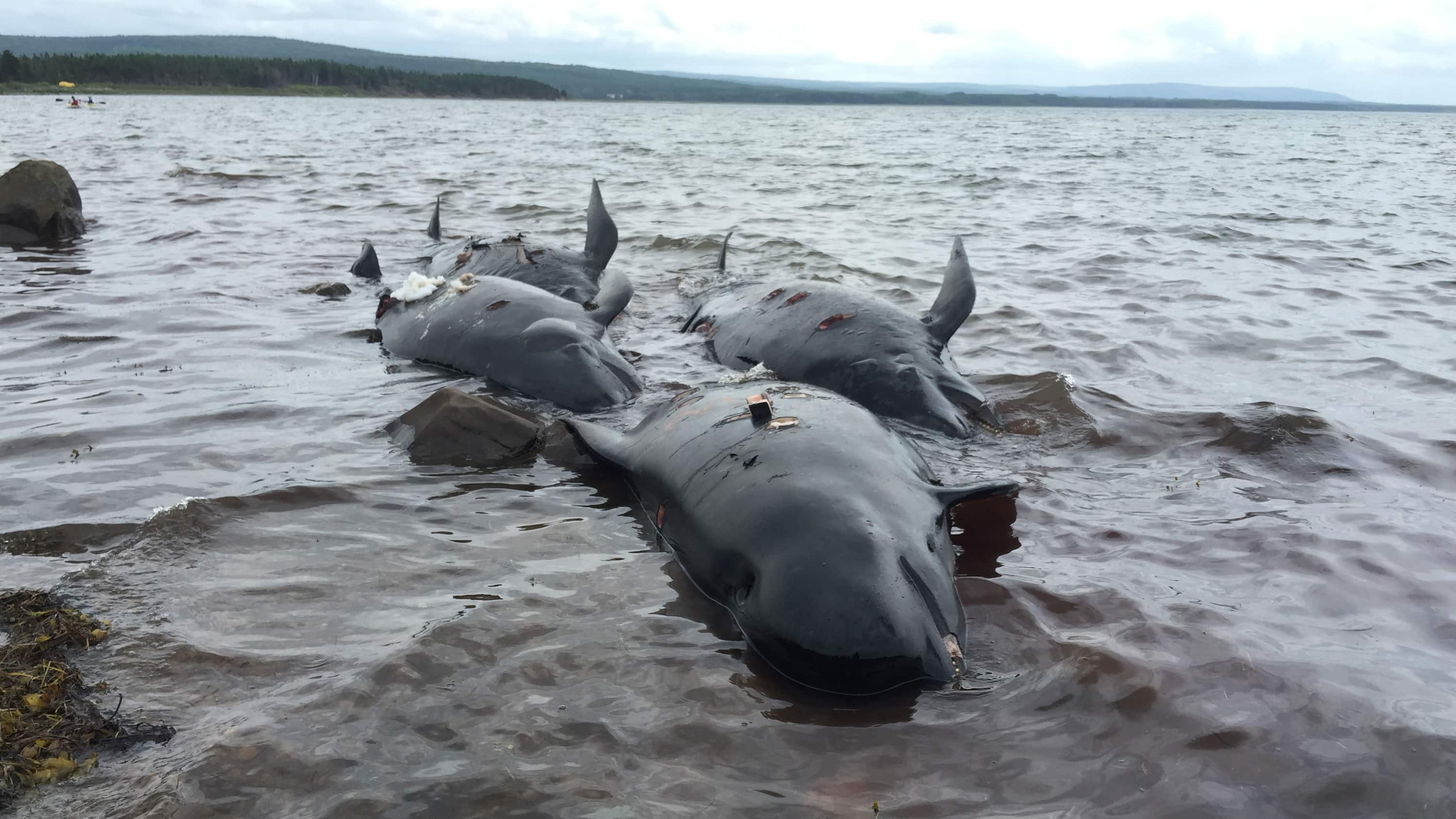 5 years ago
0:34
More than a dozen whales beached in Cape Breton earlier this week. Eight of them died. 0:34

You can hear more of Peter Armstrong's Aug. 4, 2015 interview with As It Happens host Carol Off — as well as the following stories, on this week's 'The Great Outdoors' episode of "As It Happened: The Archive Edition":

Out of office, into the woods: Stephen Harper's trip to secret Bohemian summer camp

Rabid raccoon attacks Maine jogger — so she drowns it

'Like a crazed Tasmanian devil': Vancouver woman and her dog mauled by raccoon