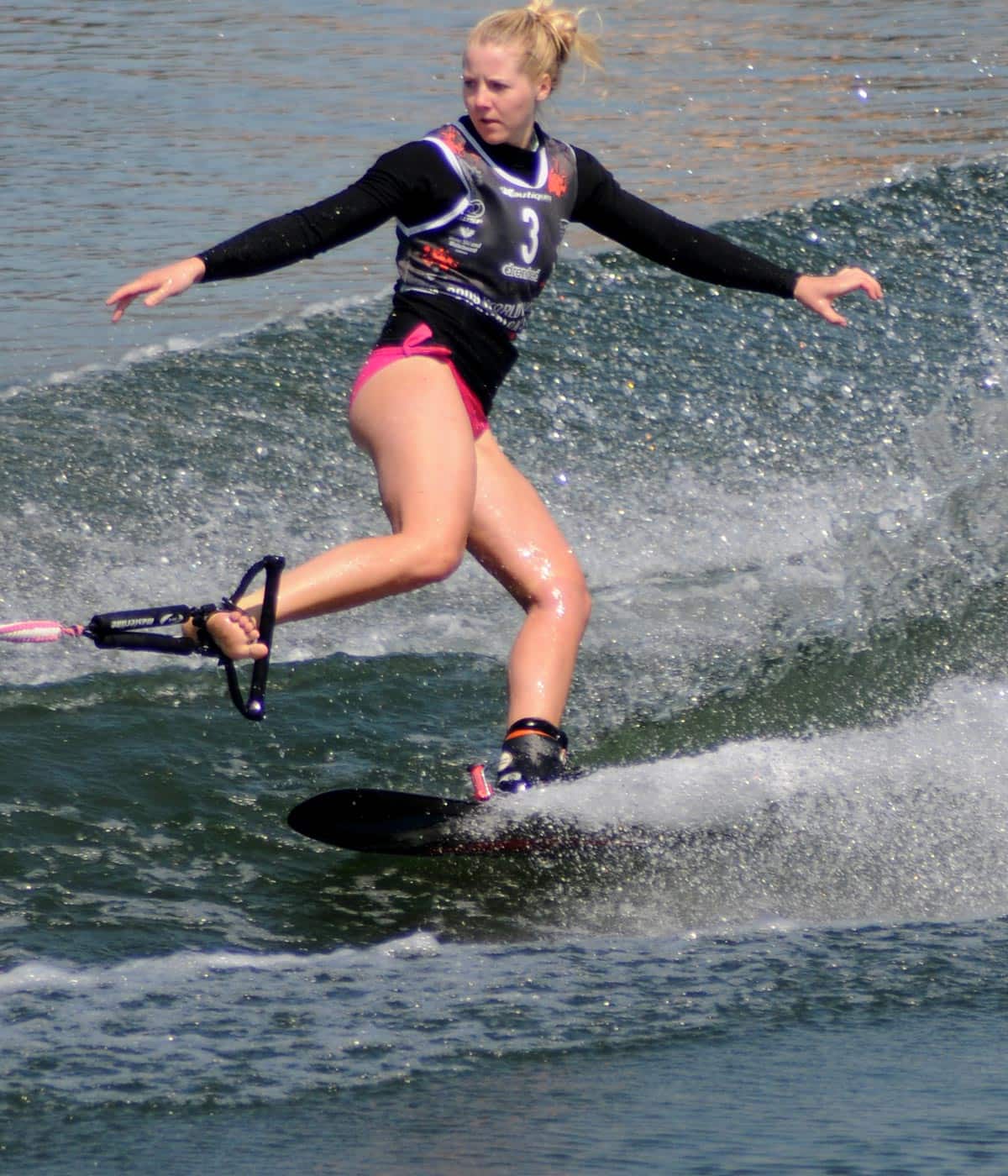 Whitney McClintock: Waterskiing is in my DNA

My family paved the way for me becoming a world champion

By the time I was 18 months old, my dad ran along the shoreline towing me as I skimmed across our beach's shallow waters. (Courtesy of the McClintock family)

From the moment my feet fit into a pair of water skis, I only had one thought: to be a world champion one day.

It was the only waterskiing dream I ever had. It was the one idea that felt true to my core — like it was part of my DNA.

My uncle Joel became the first world champion of the McClintock family back in 1979 on Long Pond in Toronto. Then, my Aunt Judy made it a family tradition when she became a world champion in 1985 and then again in 1995.

I started waterskiing before I can remember. By the time I was 18 months old, my dad ran along the shoreline towing me, on mickey-mouse skis, behind him as I skimmed across our beach's shallow waters.

My mom tells me I always had a huge smile on my face when I was skiing, as long as I didn't fall in the water — I hated being wet. My parents made it their priority for Jason (my older brother) and me to ski every day, all summer long at Puslinch Lake in Cambridge, Ont.

That is where I witnessed my aunt, uncle, dad and mom wake up before the sun to ski on the glass calm water before the boats started sending rollers around the public lake.

My aunt Judy was my hero. I wanted to be just like her when I grew up. She demonstrated what it took to be a world champion (even while being super mom to my three cousins!).

I knew one day I would follow in her footsteps. If we wanted to be the best, dad told us (by the age of six and eight) that we too needed to be skiing as the sun was coming up. There was no arguing that fact. My family had paved the way.

Our parents always empowered us with a spirit of domination. (Courtesy of the McClintock family)

Jason and I had been given the opportunity to grow up at McClintock's Ski School with our dad as the Canadian national team coach; to be surrounded by world champions; and to go to Florida to train for at least a month every winter.

It didn't take long before we were dominating local, provincial and national competitions. Jason and I were always on the podium and upset if we weren't in the centre.

Our parents always empowered us with a spirit of domination. It's not that failure wasn't an option; we just literally worked harder than anyone else, and got so far ahead of the competition that we had the confidence and expectation to win.

I remember my first 'serious' meeting with Busher (Steve Bush — the man who selects and takes care of every national team in Canada).

He laid out the framework of what I had to accomplish to be named to the junior world championship team in 2002 (I was 12 and competing in the under-17 event). I qualified for the team and I ended up getting a medal in my world debut.

This competition introduced me to the level of sport I needed to achieve. I remember my mom saying to me, "you are doing great, those girls are so much older than you.”

I didn't care how old I was. All I wanted was to be the best. The next junior worlds were held two years later and Team Canada dominated. The boys swept the gold medals, my big brother won three gold medals, I also won gold, silver and a bronze medal.

Jason and I celebrated a team gold in addition to our personal world-record performances. Dad was proud to tell everyone he met that he had two more world champions in the family!

I made the Canadian elite national team for the worlds in 2003 when I was 13; finished fourth in two events at the 2005 worlds.

By 2007, I was prepared to be crowned world champion. But just three days out from competition I sustained an ankle injury that the doctors told me would need surgery, and that I could not ski at the world championships.

I elected to postpone my surgery until after the under-21 world championships. I skied, and I cried in pain for almost every set, for three months to become a U21 overall world champion at age 17.

My dream of being an [elite] world champion would have to sleep for another two years while I trained tirelessly, driving an hour to and from the lake and working out in the gym while maintaining straight A's at university studying pre-med sciences.

In the fall of 2008, Ralph Krueger, the former coach of the Edmonton Oilers, talked with the Canadian waterski team about eliminating obstacles and distractions to ensure a desired result. I knew my desire was winning the worlds in Canada in 2009, and school was limiting my potential on the water.

But it was hard to let go of my dream of graduating university before my 21st birthday, a seemingly silly one compared to fulfilling my lifelong drive of becoming a world champion. So I took the 2009 spring semester off and focused whole heartedly on skiing.

Matt Rini, my coach, told that 19-year-old at every set, every day, every workout, "you are one step closer.”

That summer, I struggled with severe neck pain that would keep me off the water for days to a week at a time. Still, I pushed on.

I did the unthinkable — I was crowned world champion in trick, slalom and overall while leading my team to the gold medal. (Courtesy of the McClintock family)

I fought to get on top of the podium all season long, and I came up short. Yet I was stronger, more fit, mentally ready and more prepared than ever before to win the worlds in Calgary.

But, about five days out from the start of competition, my neck locked up on me again and I thought my dream was crushed — Again!

Matt's faith in me, however, never wavered and he made sure I knew it.

"You don't need to practise this week, you need rest,” he said. “You have worked the hardest all season and you are the best."

With the love and support of my country, family, friends, team (big brother on the team, too), coaches and God strengthening me, I did the unthinkable — I was crowned world champion in trick, slalom and overall while leading my team to the gold medal.

The overwhelming feeling of becoming a world champion still brings me to tears.

And it all started as a little girl's dream to make her daddy proud.