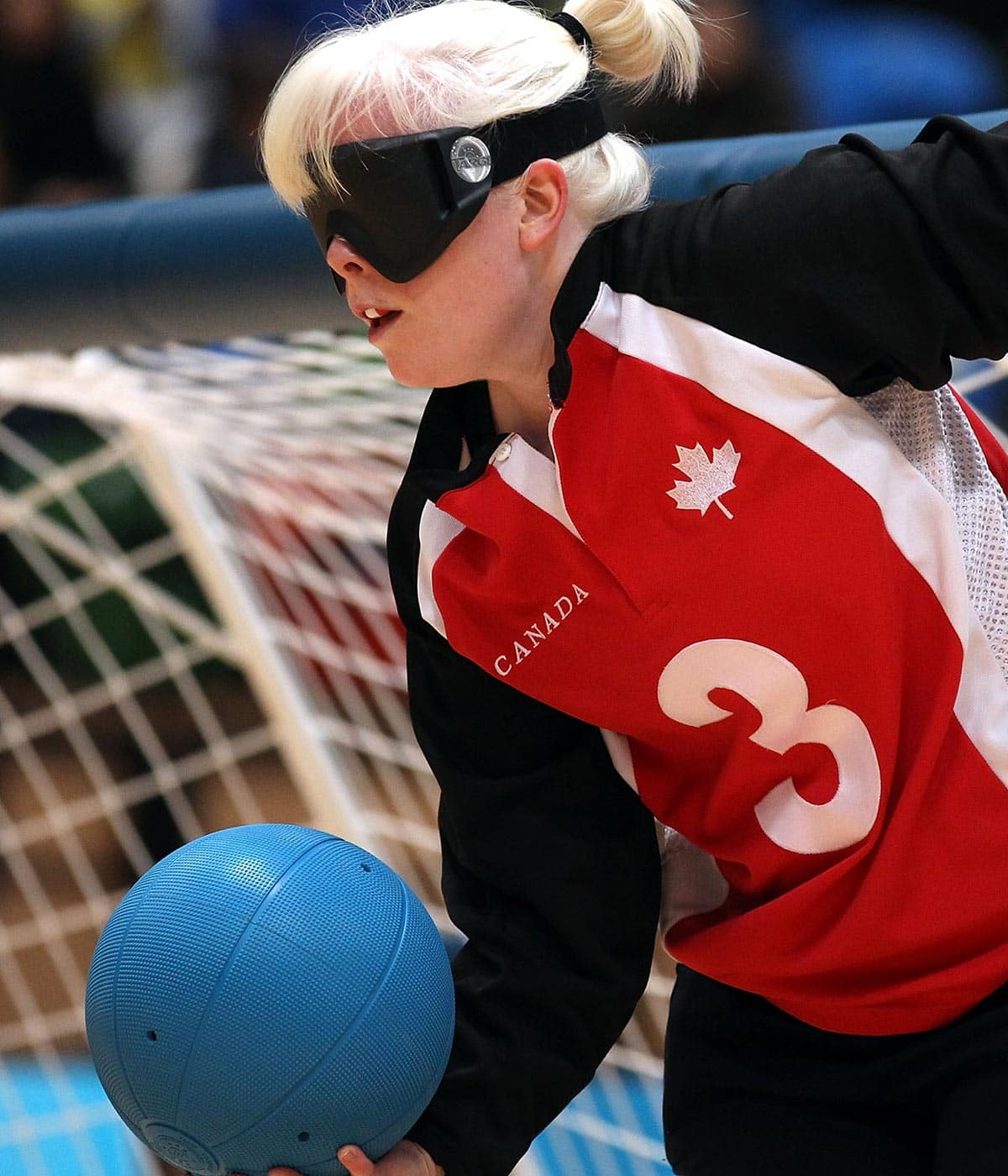 I fell in love with the sport of goalball immediately. (Clive Rose/Getty Images)

I was born on April 21, 1986 with albinism, which meant I had no pigment in my hair, skin or eyes, and was legally blind.

Fourteen years later, I was leaving home to attend a residential school for the blind and visually impaired in Southern Ontario.

It was there where I was introduced to goalball.

I fell in love immediately. I mean, who wouldn't love throwing themselves onto a gym floor to block a ball that is being thrown (rolled along the floor up to 50 km/h) at you while wearing blacked-out eye shades so you can't see a thing?

A year later, in the spring of 2002, I found myself in Prince Edward Island playing goalball for Ontario at the Canadian championships. This was when my world changed.

I learned about things I never knew existed: goalball at the Paralympics, playing for Canada, discovering hundreds of other countries that play.
I knew this is what I wanted and I was going to do it.

I was selected as an alternate for the national team in 2004, and made the squad a year later.

It didn’t take long to taste success as I competed at my first world championship in 2006, which we won!

Then I had the first year of my big plan set: go to the 2008 Beijing Paralympics, learn, observe, take in the experience and hopefully get some court time and a medal.

Unfortunately this didn't happen. I was not selected to the team. It was heartbreaking.

Now what do I do? I could walk away from the sport and be done, but I was only 22 and wanted a Paralympic medal.

I decided to skip the first part of my goal and continue from there. I would be a starter at the 2012 London Olympics.

In the summer of 2008 I moved to Ottawa to train with some of the top athletes in the country, practicing goallball twice a week. I wasn't in school any more and was able to dedicate my days to just training, which paid off as I was back on the team a year later after a hard year of commitment and training.

After a fourth-place finish at the 2010 world championships I was ready to take the next step.

We qualified for London at the 2011 IBSA World Championships in Turkey. This was the first major tournament I played with Canada as a starter and we won.  I will never forget it.

The road to London included one of my most enjoyable seasons. In a matter of six months we travelled to Mexico, London, Finland, China, Sweden and Alabama, which covered training and tournaments.

Our team then centralized in Ottawa for three months leading up to the Olympics.

I get to compete for Canada at one of our most important tournaments. (Clive Rose/Getty Images)

London was an amazing experience. The atmosphere was so cool, seeing all the Canadians there, proudly representing our country and eager to do their thing.  We were no different.

We finished first in our pool and couldn't have asked for a better draw. Our quarter-final game was against Finland, the fourth-place team from the other pool. It was a tough game, one that went into sudden death overtime. But it didn't end in our favour.

Our team, which was a gold-medal threat, just lost its quarter-final game. We were done, our Paralympic dream of being on the podium crushed.

I was forced to look at my future. What did I want for my next four years? My husband and I wanted to start a family. But when was the best time?

I would have to take a year off competing while I was pregnant, which meant I would miss important tournaments. We ultimately decided that the best year for me to take off would be right after London.

My daughter Kennedy was born the following May. I was back with the Canadian team in September. My daughter travelled with me for the first year, then I started to leave her at home with her dad and babysitters.

Some days were tougher than other days, with me not being able to see her, but she helps my motivation at the gym and on the court. If I'm spending time away from my daughter, I'm going to make it worthwhile. I don't want to be missing time with her to not give it my all.

Today I'm in Toronto at the Parapan Am Games, helping our team qualify for Rio. Winning gold on home turf would be pretty sweet. It’s even more special to me to win because the gold medals provided for the Games came from a Barrick gold mine that my dad worked at for nearly 30 years!

I never thought when I first picked up goalball that I'd be playing for Canada as one of the top athletes in the country. I had so many ups and downs in my career it has only made me a better athlete.

Now, I get to compete for Canada at one of our most important tournaments.