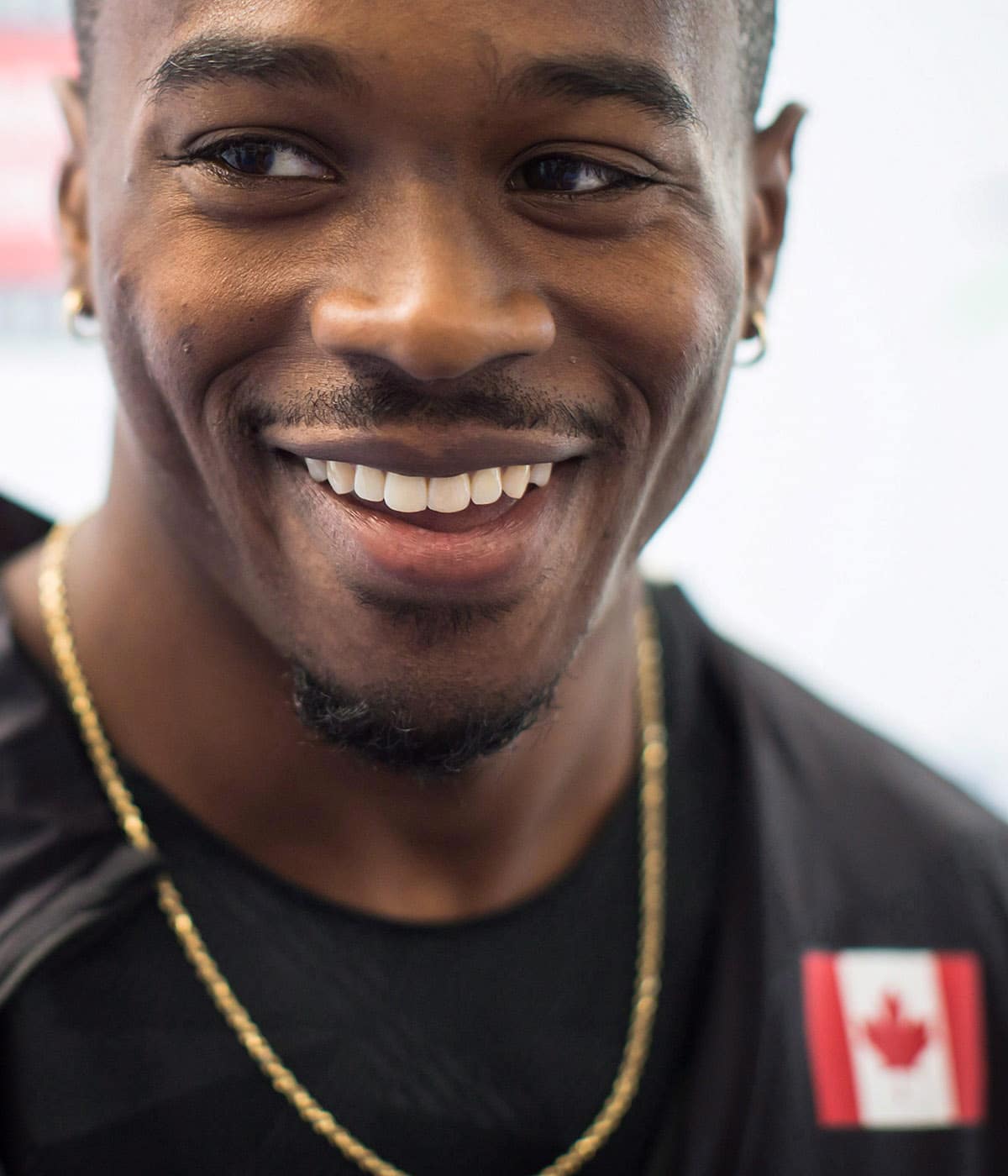 By Aaron Kingsley Brown for CBC Sports
May 1, 2022

A little while ago, I tweeted: “We devalue ourselves too much as athletes in Track & Field. We have to change the game.”

Let me expand on that.

It is far too common for world-class track and field athletes to go unsponsored. Many athletes depend on ‘Go Fund Me’ campaigns to chase their dreams.

Talented athletes who fall short of the podium believe they have accomplished nothing, that they don’t deserve financial support. But marquee medal winners are in an exclusive club, reserved for the ultra-elite at the pinnacle of our sport. Imagine a profession where you need to be a world top 10 just to begin earning a decent wage. That is the reality for many track and field athletes.

Our over-emphasis on medals is a major cause of this economic strife. There’s nothing wrong with medals themselves. In fact, they are meritocracy in action. Medals reward the best performers. The trouble starts when medals are the only thing that’s highlighted, the only perceived value in our sport. Reducing the sport to the absolute best of the best devalues and alienates an entire group of athletes who are one small tier below the extreme peak.

Are you trying to tell me that speed isn’t a coveted commodity?  Every year, people lose their minds watching 40-yard dashes at the NFL Scouting Combine. Devon Allen recently announced that, like sprinter and ex-wide receiver Marvin Bracy, he will be taking a break from professional track and field to pursue the NFL. Allen can do this because he ran a fast 40-yard dash at the Oregon pro day. He was signed shortly after by the Philadelphia Eagles. He hasn’t played organized football since college. And Allen, while extremely fast in his own right, is best known as an elite hurdler. Truth is, he’s worth more as an unproven NFL player, than as a three-time American national champion on the track.

But world-class speed isn’t exclusive to medallists. Mid-tier sprinters can stave off the fastest the NFL has to offer in terms of raw speed. That should be worth something.

Aaron Brown on his way to winning a 200-metre semifinal at the Tokyo Olympics in August of 2021. (Frank Gunn/The Canadian Press)

The difference between 9.99 and 10.00 is negligible. But .01 can mean making or missing the podium, qualifying for the finals or finishing ninth. A hundredth of a second might also be the difference between being on or off the national team. Which could determine your ability to pay bills for the rest of the year.

The medallists make the bulk of the money in our sport, and deservedly so. There should be strong incentive to win at the highest level. But there is still value to be extracted from the rest of the field. They’re still among the world’s elite athletes, and they can do things most can only dream of. It’s all about unlocking that value.

When he was a free agent, LeBron James said he would not settle for less than an NBA max contract, because as the best player in the league, he sets the market for everyone else. Where is that unifying spirit in our sport? No one knows what the next athlete makes in professional track and field. As long as contracts remain undisclosed, a fair market for athletes has no chance to form.

When TV deals increase for the NFL, the revenue increases for the league, which passes to the players in the form of bigger salary caps. When was the last time athletes in our sport saw a pay increase? In many leagues, an athlete union negotiates with the owners. Athletes in other professional sports understand that they are the asset, providing value to the sport, not the other way around. Pro leagues understand that the more valuable the athletes, the more valuable the product, and everyone stands to profit. This has always been missing from our sport.

Change won’t happen without a unified effort from the most influential athletes at the top of our profession. Our sport should find a way to partner with athletes, to leverage their value from a business perspective. If we can increase the overall value of our sport, it can be a viable choice for prospective athletes.

The Tokyo 2020 Olympics saw 3.05 billion unique viewers on TV and digital platforms. In 2014 NBC paid $7.75 billion US for the American Olympic broadcast rights through 2032. But rather than foster a mutually beneficial financial environment for the athletes, the IOC once again enforced restrictions during ‘the Olympic window’ that limited athlete earning potential. So if the sport is so valuable during the Olympics, why isn’t there more value the rest of the year?  Maybe we should question the presentation.

If the emphasis is almost always on world records and gold medals, then audiences will begin to feel that’s all the sport has to offer. Imagine if you only cared about the NHL when a player scored a hat trick. Or only watched the NBA when a player exceeded 50 points, or the NFL when a quarterback threw for 500 yards.  Perhaps track and field needs a new format. We can create drama and raise the stakes with things like a robust world ranking system that actually holds weight. Or with more marquee head to head matchups, in which the times are an afterthought.

I believe that value remains hidden in our sport because we are reluctant to veer away from tradition. Track & field governing bodies have been slow to embrace change. We can’t even post videos of ourselves at track and field’s biggest events because billion-dollar conglomerates own the rights. But how can we grow the sport and attract casual viewership when those moments are hidden behind memberships and paywalls?

There are real people behind the athletes, and drama and intrigue far beyond fast times and medals. We can get out of the story telling rut of idolatry and superhero facsimiles being made of the champions. What about real-world experiences like falling short of your goals? There are athletes in other sports who haven’t won at the highest level, but who are more popular than the superstars because they bring excitement - see Tim Tebow. Those individuals are rare in our sport but they have the potential to bring in audiences beyond track aficionados

Sprinters Brown, left, and De Grasse, speak to the media at the Canadian Track and Field Championships in Montreal in July of 2019. (Ryan Remiorz/The Canadian Press)

Track and field athletes are overdue for some innovation. We shouldn’t rely on shoe companies and prize money to subsidize our sport. We need to shoulder some responsibility for the current state of affairs. We need to take ownership of our perceived value and manufacture more of it.

Don’t wait for the media to discover you and script the same cliché stories about you. Take control of your own narrative and tell a compelling story straight from the source. Know what you represent and what you want to be known for - be it a nickname, a clothing accessory, a celebratory dance, or funny social media posts. We have some of the most physically fit athletes in the world in our sport; the promotion of healthy lifestyle could broaden our reach. Attract a fanbase by letting your personality shine through. Invite the audience along on your journey.

When you garner a fan base who wants to support you, partake in fan engagement and give back to those who lift you up. Athletes need to do a better job of promoting the sport and making it more enticing to join. Highlight the outlets who are passionate about our sport. There are entire industries and networks built around other sports and their athletes, so why not track and field?

The blueprint is out there, in use by other leagues. Fantasy football owners know the New York Jets’ 3rd string running back because they’ve been scouring the waiver wire looking for an injury replacement for their weekly matchup. NCAA basketball fans have their dreams and brackets crushed every March Madness by Cinderella teams like Saint Peter's. Fantasy sports boost the awareness of up and coming athletes, providing more overall value. There are outlets talking sports 24/7, so let’s support the ones that follow track & field. We can create our own talk too, and take matters into our own hands. Social media is only becoming more dominant.

Winning and high performance will always rightfully remain the priority of our sport, but that doesn’t mean track and field athletes can’t find other ways to leverage their professional careers and Olympians to increase their year-round value. The races may only have one winner, but that doesn’t mean that the rest of the field has to lose.