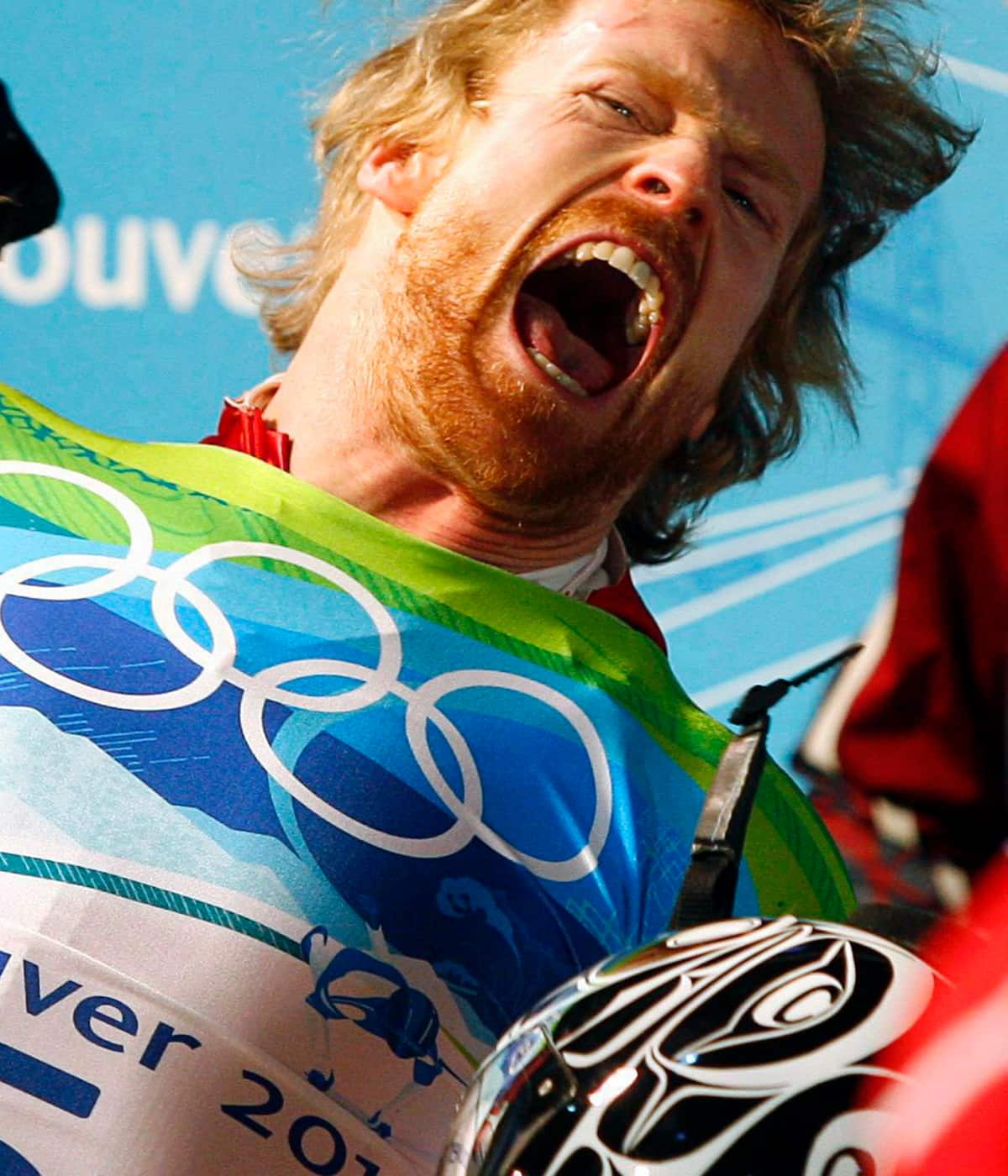 A pitcher is worth a thousand words

Bing-bong. My 30-second countdown begins to tick-tock into the still night air. I’m standing at the start line for my second run of the day, my fourth and final run of the 2010 Olympic Winter Games in Vancouver and Whistler. The last eight years of my life are about to be compressed into the next 52 seconds. With everything that was riding on that final descent, it’s almost incomprehensible to think now that nothing was going through my mind.

I was in second place at that moment, 18 hundredths of a second behind the man who was ranked number one on the World Cup circuit. The same man who would become the greatest slider in the history of the sport and one of the world’s most dominant athletes of all time: Martins Dukars of Latvia.

I was a longshot, at best. The Vegas odds-makers were certainly not betting the house on a ginger lad with a maple leaf on his chest.
But they didn’t know what I knew: I believed with every ounce of my being that I could execute flawlessly - not that I would win, but rather that I could be the best version of myself on the day it was most important to do so. That was all I could do. That was all I had control over. That is what allowed me to be present, focused, and ready to lay it on the line.

I wasn’t doing anything that I hadn’t already done in practice. I had experienced this a million times in my mind’s eye. I was not reaching beyond my abilities, although I did have to believe that I could do it when it mattered most.

Crossing the finish line after that final run, as I was rocketing up the outrun, before piling headfirst into the giant mound of foam padding that keeps us from flying off the end of track, I heard myself, inside my helmet, saying “That has to be enough. That has to be enough.” But only time would tell, as the final results were no longer up to me. They were up to Martins, who still had one run to go.

Martins took to the ice for his fourth and final descent of the two-day competition with a lead of 0.18 of a second - a lifetime in a sport which measures in hundredths of a second. In my own four runs, each 1,450 meters long, I had travelled nearly six kilometres down that frozen, serpentine toilet chute, hitting speeds over 145 km/hr, aboard a veritable cafeteria tray on rails. Each time, I had to navigate 16 of the most unique, physically demanding corners of any track on the planet. After my final run, I had to wait another 52-plus seconds to discover my fate that frosty Friday evening…Feb. 19, 2010.

I was familiar enough with the track that I knew he would bleed time all the way to the bottom of the track, as I had laced that section with neurosurgeon-finesse. All I could do was wait.

Halfway down the track, Martins had already stretched his lead to an impossible quarter-second advantage when I saw the opening I’d been looking for. As he precariously ushered his steel and fibreglass sled through the not-so-straight straightaway between the exit of corner 7 and the entrance to corner 9 (corner 8 is a right hand side blip on the radar that one tries to bypass without incident) Martins drifted left and late into corner 9.

The margin began to shrink and hope began to swell in my heart. As he passed though the fastest corridor on the track, the lowest point, where it begins to climb back uphill between corner 15 and the entrance to Thunderbird, corner 16, he had lost most of his lead and was in front by a mere eight hundredths of a second.

I had my helmet painted specifically for the Olympics. I chose to embrace local legend, which says a Thunderbird lives on top of Blackcomb Mountain, and to honour this most-powerful of Indigenous spirits with a design by First Nations artist Phil Gray.

At no point was I ever in the lead. Martins pushed faster than I did and he beat me on that first lap, which meant I was chasing him the entire race. But that final corner, somewhere in Thunderbird, I squeaked by… and when Martins broke the final beam with his helmet and stopped the clock on his Olympic experience in Whistler, he came up .07 seconds short. (Blink your eyes; that took .1 seconds.)

My feelings in that moment are still hard to wrap my head around. The best way I can describe the elation is to say it might be akin to sticking my big toe in a light socket. As the energy coursed through my entire body, filling each cell with wild voltage and euphoria, it exited though my outstretched arm and pumping fist. Surreal.

I guess it depends on who you are and how you look at things in life. I don’t see that race as one that I won, but rather one that Martins lost. It was his for the taking, but he made a mistake. I did not. I was as near perfect as I could have ever dreamed to be - and that allowed me to be victorious.

And I think that’s the life lesson. You don’t need to go out with the expectation that you have to win everything to be successful, but you do have to position yourself for success. That means digging deep, being the best version of yourself on the days that matter most. Expecting that you can be on top of your game every day is setting yourself up for defeat. But picking your spots, preparing diligently, believing you have the power, and trying to be a good person, can pave the way for dreams to manifest into reality.

The gold medal was the goal, but the golden moment that came next is something that you can’t prepare for. When my “beer angel” wandered out of a Whistler pub and presented me with that frothy pitcher of Canadian culture as I passed by -fresh from victory, my helmet still under my arm, cameras catching the moment - all I could do was be myself. In that moment, people felt a connection.

Folks can’t always see themselves standing on top of the podium at the Olympics, but my brothers and sisters across our great land can all see themselves standing in a moment of pride and celebrating a milestone met, with a celebratory beverage of their choosing. If the beer is all I’m ever remembered for, I consider myself the luckiest fella on Earth.

(Large Images by The Canadian Press)