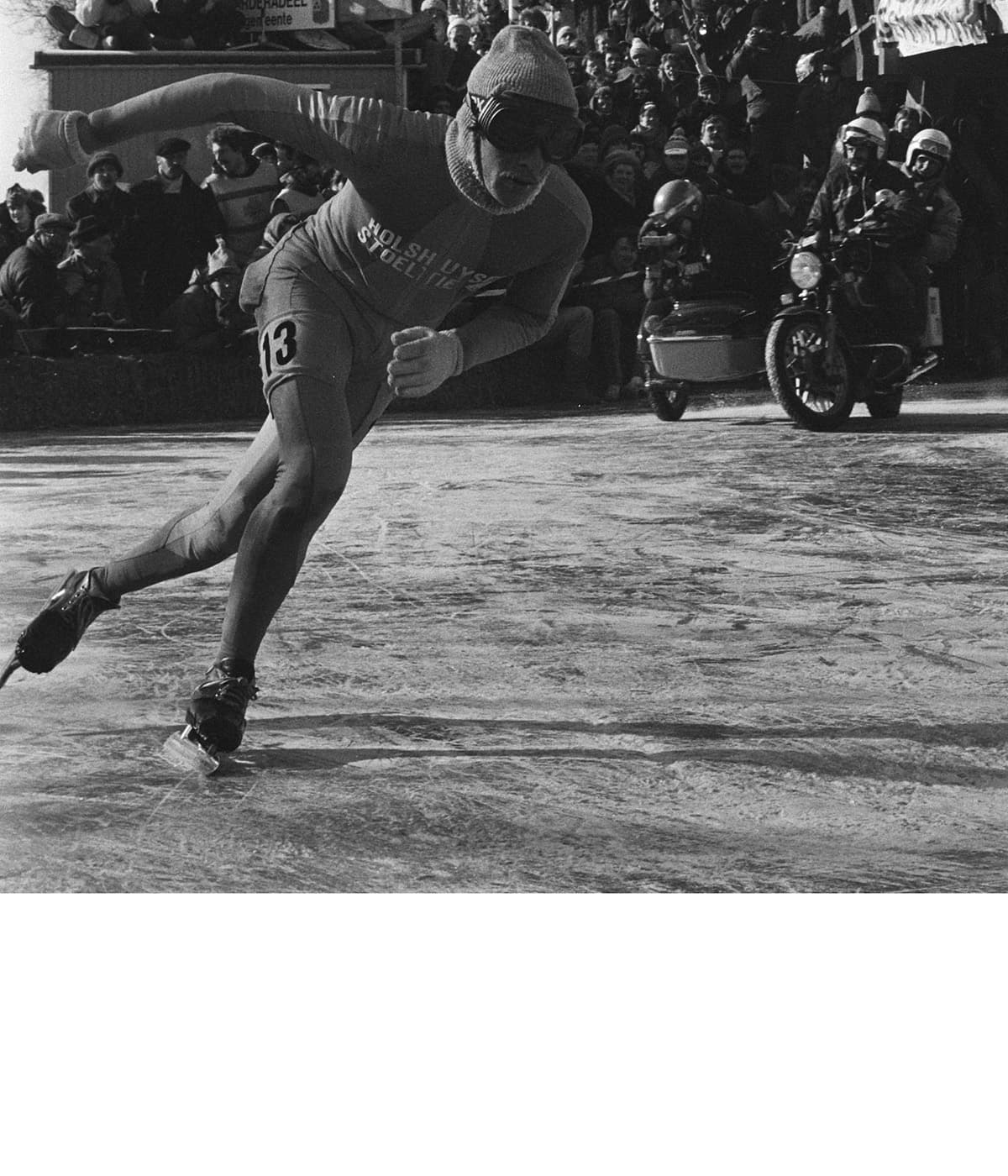 'Since the 18th century, the people of Holland would gather during deep freezes to skate 200 kilometres from city to city'

Waking up in the Netherlands as a child, to the chill of winter creeping in outside your warm blankets, you'd jump out of bed because you knew if the canals were frozen — you would skate.

There were only a handful of days below zero to take full advantage of, and skating is to the Dutch what hockey is to Canadians. Passion.

Your heart pounds as you lace up your skates because you know you're the first one to cut the ice. Holding your breath, you carve out into the cool air 'scrape scrape scraping' your skates into that rhythm you've missed all year long. Racing your friends until the cold air bites your face and your lungs feel sore. We would skate for hours, heading in only when our eyebrows were frosted with icicles and our legs couldn't take anymore.

11 steden (11 cities) written across the route of The Elfstedentocht when it was almost run in 2012, but bad weather cancelled the event. (Robin Utrecht/EPA)

There is a fever you grow up hoping for in the Netherlands: "Elfsteden Koorts," which translates to "Eleven city Fever." When the temperatures become cold for a few weeks, all the Dutch come out to skate together, and the canals fill up with people. Communities unite and volunteers appear to keep ice clear and create events. There is this great feeling of pride. The 'Eleven city Fever' will begin with talk of the possibility of an Eleven cities race... growing with each passing day below zero. Towns will buzz with speculation, hope — and excitement. Will it come? It is all you will gossip about at coffee, see on the news, listen to on the radio. It’s kind of a big deal.

Since the 18th century, the people of Holland would gather during deep freezes to skate 200 kilometres from city to city, completing a circle which connected 11 cities in Friesland. It became an official race in 1909, and since has been held 15 times. In the first 55 years since 1909 it was held 12 times, in the later 55 years, only three times. As the length of time between races has increased, the signs of global warming are just disheartening to some, but for others, the excitement is only heightened. When the race is held, it will be a once in a lifetime event for many people.

Many skaters will spend their entire lives training just for the chance to be a part of an Elfstedentocht race. I was one of them.

Growing up with The Elfstedentocht

I was born in 1958, and I experienced the sheer exhilaration of the event in 1963. Like many others, it became my absolute dream to participate.  I practiced long track speed skating from the age of 14, but switched to marathon skating in 1982. Marathon skating puts a large group of skaters together, racing long distances on natural ice or a long track oval.

There was never any guarantee that it would even happen, only hope and desire. After 22 years of waiting, many people, including myself, became skeptical that it would ever happen again. But in 1985 the temperatures finally dropped, the Elfsteden Koorts began... and I would get my chance.

Van Benthem at the finish line in 1985, with Queen Beatrix in the background. (Photo submitted by Evert van Benthem)

The entire country unites, 16,000 participants hit the frozen waters of Friesland, 2 million spectators braving the cold, and the rest of Holland watching live on TV for 18 hours. If you ask someone today what they were doing the day of the Elfstedentocht ... they will still remember sitting on the edge of their seats. It becomes a historical event.

I was 26 years old, and I didn't know what to expect. All of us waited, crammed close together in a great hall in Leeuwarden, nervous, waiting for the gates to swing open. Immediately out of the gate, we had to run about a mile, carrying our skates down to the ice, get them on, and be off. I had always been a quick runner and I was one of the first skaters on the ice. For the first two and a half hours we were skating in the dark, and most of us hit cracks in the ice and fell at least a couple of times. It would have been really easy to ruin your skates or get hurt. In fact, I broke a chunk off the back of my skate, but didn't realize until the race was over.

I was always among the first group of skaters to get to the next city and receive my stamp, which had to be completed in all eleven cities. My legs felt good that day, and I kept going. Nearing the end of the race, having come full circle back to Leeuwarden, after completing a 200km track through Eleven cities of the Netherlands, I was in the leading group of four skaters approaching the finish line. All of the skaters had a history of winnings and fame, and I felt honoured to be there with them that day. When it became a sprint for the finish line, I won the race in 6 hours, 46 minutes and 47 seconds. It was a record-breaking time.

My entire life changed with that win. Queen Beatrix was waiting at the finish line, along with 3,000 journalists from all over the world, the Prime Minister, and thousands of spectators. I was showered with congratulations, overwhelmed, and in disbelief, I was a happy man.

The financial winnings for an Elfstedentocht race are humble. It is just a gold medal. But I was made out to be a Hero. Everyone in Holland instantly knew my name. I was asked to do numerous interviews, commercials, and events. The real prize was fulfilling a dream of my own, which was also the dream of many watching, competing in a cultural event that makes the Dutch, Dutch. It was nothing short of amazing.

Life after my 1st win

I continued with milking my cows, together with my wife Jannette. We had started our own dairy farm a few years before. And I started preparing for the new marathon season again. I had a few wins in classic marathons. I became a sort of a specialist in marathon races, mostly on natural ice. On February 21, 1986, exactly one year after the Elfstedentocht of ‘85, I won a 200km race on the Rottemeren, with a record-breaking time of six hours. Five days later, the Elfstedentocht would be held again. I remember feeling a bit disappointed that this exciting time in my life could end because, what were the chances that I'd win it again? I felt like all eyes were on me, and I was even more nervous than in 1985.

I couldn't sleep the night before and I was the first out to get ready that morning. I felt in good shape but I had no idea if I would pass the torch to a new winner that day. I was the strongest skater of all the participants. You can compare the Elfstedentocht race with a stage in the Tour de France. I was the leader of the race and I reached the finish with an advantage of a minute on my rivals. I felt really honoured, and still do today, to be the two-time winner of this historical race.

22 years since the last race. Will there be another?

I retired from speed skating in 1996, but still laced up my skates to the tour with friends when the Elfstedentocht happened again in 1997. Without the feeling that everything was on the line, I enjoyed the enthusiasm and the festivities that day. Thousands of spectators, singing, yelling, partying... having fun. Being together. This is what the Elfstedentocht was all about.

It's been 22 years since the last Elfstedentocht. It almost happened in 2012, reporters were calling me, the fever was on. To the disappointment of many, it just wasn't cold long enough to gain the 15 centimetres of ice on the canals strong enough to carry the weight of thousands of skaters. There is no denying that times have changed a lot. Instead of growing up skating on natural ice, children in Holland learn to skate at the Ovals. It is often too warm, and there are only a handful of frozen days for natural ice skating in an average year. The people still get excited, social media feeds flood with photos of natural ice each time a day turns deep cold. Families lace up and head out and the feeling of community is still there. The Dutch have skating in their hearts, and in their blood. They love it.

In the year 2000, I immigrated to Canada to dairy farm with my family. My wife Jannette and I are now running a farm with our son Rolf and his wife, and a second farm with our son Merein and his wife, while my youngest son Jos works in Calgary as a successful barber. While the fame in Holland was much appreciated, we enjoy the peace and privacy, and space that Canada has to offer. Each winter I clear off the ice on our dugout for my grandkids to skate, but instead of speed skates, they're little hockey and figure skaters. The feeling is still here in Canada. We spend a lot of time in the community rinks because it is often too cold in Canada to skate outside! Each year, when the first snow falls the anticipation to begin the skating season can be felt throughout the provinces and the buzz of the hockey season begins.

But I will always dream of Holland.

I will continue to be optimistic that one day the Elfstedentocht will happen again before my time is up, and I will skate the tour with my sons one last time. After all, it was 22 years before I had the chance to win my race... it can happen! Someone will get another chance. If global warming is to blame for the warmer winters in Holland, it won't be responsible for watering down the rich heritage the Dutch have cultivated with this exciting tradition. You can take the cold out of Holland, but you can't take the love of skating out of the Dutchman.