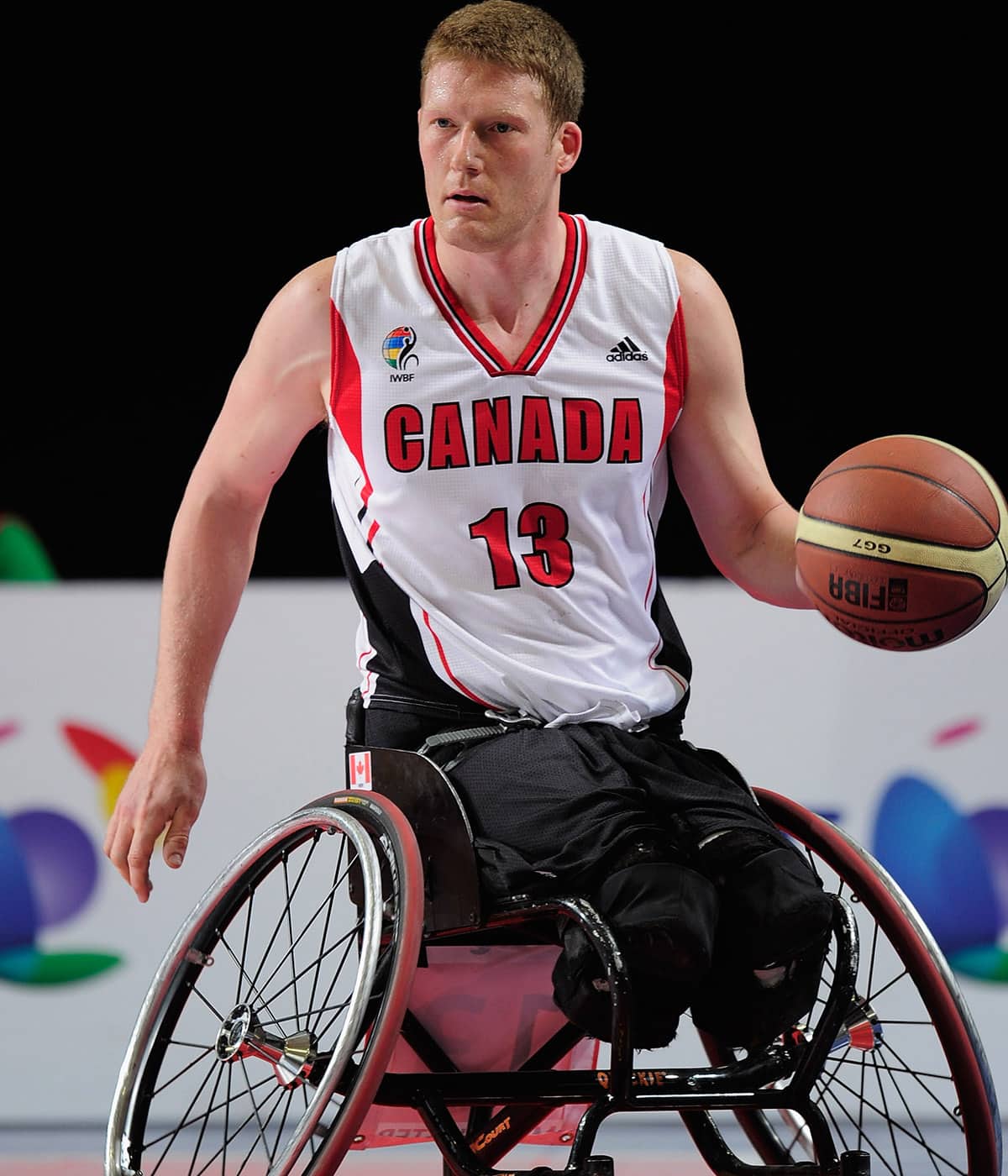 The story of a man who built and lived wheelchair basketball

'Jerry was one of the best wheelchair basketball players in Canadian history ... not bad for a guy who wasn't even disabled.'

Long before he became a Paralympic gold-medal winning coach with Team Canada, Jerry Tonello was one of the best wheelchair basketball players in Canadian history.

Blessed with a soft touch and an imposing frame, Jerry was a force. He broke scoring records. He smashed wheels. He dominated at Nationals. He scored over 20,000 points in the Toronto Spitfire League over a three-decade career.

Not bad for a guy who wasn’t even disabled.

Jerry Tonello was a force on the court. (Photo submitted by Patrick Anderson)

A standout high school tennis player and track athlete, Jerry took up wheelchair basketball for reasons anyone can relate to. He played because his friends played and because he was good at it. He began after his friend Michael Bryce suffered a spinal cord injury in a motorcycle accident. When Michael started the Toronto Spitfires, Jerry and Michael’s brother Bobby helped put the Spits on the map as a top-tier international club team with a distinctly, though not always welcome, able-bodied flair.

I was a young teenager the first time I saw Jerry in action. It was the mid-90s and I was playing for the Twin City Spinners. We were hosting the Spitfires at Cameron Heights school in Kitchener. I was sitting on the bench when my teammate Ross leaned over and said, pointing at Jerry, “You see that guy? He’s stronger than our whole team combined. Watch out.” At that moment, as though on cue, Jerry took off towards the paint. Just when it looked like he was about to crash into his defender’s chair and shatter it to pieces, he threw a half dozen head fakes instead, danced to the basket, and scored. The big man had moves. I took note.

Taking it all in

I took note again a few years later when the Troy Sachs show rolled into town. It was the annual Spitfire Challenge, an international club tournament that the Spits hosted at the Etobicoke Olympiad. An amputee like myself, and a few years older, Troy was already a legend, though barely in his 20s. He had led Australia to Paralympic gold in Atlanta in overwhelming, paradigm-shifting fashion. He was a new breed — skill, size, finesse, power, bravado. He was the best player in the world. And everyone knew it. Especially Troy.

But the Challenge was held on Jerry’s home turf, and he was ready to defend it against this brash superstar. With Troy firing trash talk at “Mr. 20,000 points!” and dominating the game, Jerry countered with his own brilliant play, channeling his quieter, more rugged, older school blend of skill and power, and led the Spitfires to an overtime win.

As a 17 year-old on the eve of my own breakout, I took it all in. Of course I wanted to play like Troy. But there was something about Jerry.

Several years later, Canada supplanted Australia on top of the world at the 2000 Sydney Games. Jerry, perennially good enough to make the team but never “classifiable” as per international rules, was our assistant coach. Like Troy, I was now a young Paralympic gold medalist whose star was rising. However, there was a gap in my game. Jerry decided to call me out on it.

We were in Brazil, and he gathered the team at the hotel for what we thought would be a typical film session. Instead, Jerry opened the meeting with a question:

“Pat, what do you think is keeping you from becoming the best player in the world?”

“I am," said my teammate Joey Johnson, without missing a beat,and it killed of course (funny because it was true).

After the laughter died down, Jerry gave his answer: “Your passing.”

He then dedicated the whole session to showing clips of my carelessness with the ball and how it was hurting the team. It was embarrassing, but not humiliating. Jerry could be blunt, but his heart was always in the right place. He wanted Team Canada to keep winning, and he appealed to both my sense of pride and my sense of duty to knock some sense into me. Did I wake up as Steve Nash the next morning? I wish. But I did wake up chastened, a little more mature and accountable.

Jerry could bring it candidly as well. In 2002 at Worlds in Japan, I made the worst play of my career. In the closing moments of the semifinal against the USA, I broke free for a game-sealing layup, but instead of taking the shot, I panicked and turned it out, trying to kill the clock. We ended up losing in double OT. It was a confidence-shaking collapse.

On the way home, during our layover in Honolulu, Jerry sought me out and told me he wanted to buy me a coffee. We found a cafe in the airport, got our coffees, and sat down. After some brief small talk, he looked at me across the table and asked, “What happened?” It had been a few days since our loss, and while no one on the team had made me feel bad about the play, no one had really brought it up either. Jerry went there. He let me talk, listening to my half-formed explanation as I grasped for some way of expressing my fear of failure that didn’t make me sound like a wimp. When I was done, he offered a simple suggestion, “Next time, take the points.” I don’t know that anyone had ever looked me in the eye before and told me to have courage. I understood and began to move on.

In the subsequent years, Jerry played a crucial role in our run of four consecutive Paralympic podium finishes, first as an assistant coach, and later as our head coach at the 2012 London Games, where we won our third gold. I continued to lean on him for feedback. Often it was a quiet word coming out of a timeout: “Wait a half second longer for Bear to set the pick before you pass the ball.” Sometimes he could be blunt, not to say confrontational, but he was always a patient listener, someone who would go away to think about what you said and come back with a thoughtful response rather than rush to respond in the moment.

The last time I saw Jerry was in the summer of 2015. Already visibly suffering from the brain tumor that would take his life within a year, he and his wife Anne Louise drove from Toronto to Brock University for a team barbecue during training camp. Even though I wasn’t on the team at the time, I happened to be there, and I had a chance to joke and laugh with him one last time, and listen as he wished the guys good luck going into the Toronto Pan Am Games.

At his funeral, along with his family and friends and colleagues, I recall seeing players, coaches, refs, administrators, advocates, and builders from the wheelchair basketball community. It was fitting, as Jerry had filled all those roles in his wheelchair basketball life, at one time or another.

Not bad for a guy who wasn’t even disabled.

Q: The best book you've ever read?
A: Orthodoxy by GK Chesterton

Q: If your life was a movie, what would it be called?
A: Almost Almost Famous

Q: What word or phrase do you over use?
A: That’s right in my wheelhouse.

Q: What is a skill you wish you had?
A: Drawing/sketching.

Q: What's something no one would guess about you?
A: I’ve been working on my falsetto.

Q: What scares you?
A: The neverending expansion of instant replay.

Q: If you could have the ultimate influential dinner party, who are the 6 people you'd invite?
A: Coach Pop (Gregg Popovich), Ross Douthat, my pastor Vito, Gillian Welch, Marilynne Robinson, Jack Stratton from Vulfpeck.

Q: What makes you cry, every time?
A: Having kids.

Q: What's the next goal you want to accomplish?
A: Qualify for Tokyo 2020.